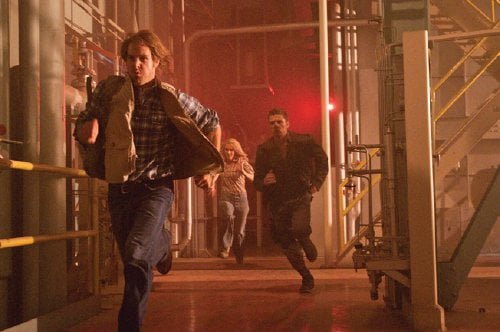 When an X5 nuclear warhead is stolen in Eastern Siberia and believed to have been transported to the United States, Col. James Faith (Powers Boothe, HBO's "Deadwood") surprises protege Lt. Dixon Piper (Ryan Phillippe, "Igby Goes Down," "Stop-Loss") when he tells him who the man for the job is, an American hero, explosives expert and skilled lover everyone believes was killed ten years ago - "MacGruber."

Movies based on SNL skits haven't been a good idea in a long, long time. MacGruber, based on the old 80's television series 'McGyver,' isn't even all that funny on TV. On the big screen it has more moments than its origins would indicate, mostly because writers Forte, John Soloon and Jorma Taccone (TV's SNL), who also directs, have opened their parody net to riff on "Lethal Weapon," "Rambo" and the 80's in general. The most inspired laughs, though, come from unexpected soundtrack selections ('Rosanna,' 'Baker Street') and comedic transitions away from them. MacGruber (SNL's Will Forte, "The Brothers Solomon," "Baby Mama") is, like Inspector Clouseau and Austin Powers before him, an incompetent idiot with an overinflated ego, an explosives 'expert' who cannot defuse a bomb and whose own fireworks fizzle or go off at the wrong time. This is exactly what happens to the team MacGruber assembles when he pack the trunk of their van with plastique. When the Colonel fires him for lack of backup, Grubes grovels to Dixon (with excessive promises of unwanted sexual favors, a joke that gets old quickly) and Vicki St. Elmo (SNL's Kristen Wiig, "Adventureland," "Whip It") pops up. Mac immediately blows his surprise factor by announcing his presence to Dieter Von Cunth (a bloated Val Kilmer, whose character's name provides all the comedy that's needed), the man who killed his wife Casey (Maya Rudolph, "Away We Go") and presumably MacGruber himself as they were saying their wedding vows, and who Mac suspects is planning to train the warhead on Washington D.C. Much silliness ensues, including 'the celery trick' and St. Elmo used as disguised bait (the film's best scene involves her disguised as MacGruber in a coffee shop reacting to his instructions via earbud). MacGruber's non sequitur obsession with a license plate seen early on climaxes with Dixon's discovery of his notebook entries on the subject, but Mac's final run in with the actual car falls flat. A lot of "MacGruber" is like that. Still Forte gets as much mileage as he can milk out of the character, Wiig is charmingly out of her element and both Boothe and Phillippe are amusing in their determined straightfacedness. And if you ever had the desire to see Phillippe distract a bunch of bad guys by walking around with a stick of celery protruding out of his butt, here's your chance.