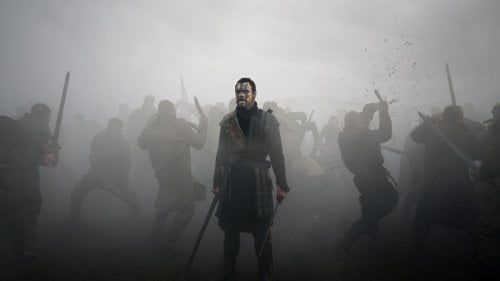 Macbeth (Michael Fassbinder) was the loyal subject of Duncan, the King of Scotland (David Thewlis), until three witches prophesize his ascension to the throne. Girded by the supernatural prediction, he takes matters, murder primarily, into his own hands to assure that he become the new king in “Macbeth.”

Justin Kurzel's ("The Snowtown Murders") "Macbeth" is a grim and brooding yet thrilling adaptation of the Shakespeare play (Jacob Koskoff, Michael Lesslie and Todd Louiso) of the Scottish man-who-would-be-king. This amazing production favors period reality over Shakespearean finery (costuming by Fiona Crombie), the Scottish warriors faces fiercely painted, Lady Macbeth's (Marion Cotillard) eyes highlighted by a swath of blue. Shot in England and the Isle of Skye, Adam Arkapaw's ("The Snowtown Murders") cinematography is shrouded in an ever present mist. Slo motion photography has been used in battle scenes many times before, but the choice is so right here it's like we're seeing the device anew. Jed Kurzel's ("The Babadook") edgy, discordant violin score presages the events that will turn the noble Macbeth into traitorous tyrant. Michael Fassbender is weighty as the Thane of Glamis, loyal servant of King Duncan (David Thewlis) until the prophecy of the Wyrd women, quickly proven when the King grants him the title of Thame of Cawdor, ignites his ambition. Marion Cotillard, here portrayed as a grieving mother (this addition accentuates the themes of legacy), is a soulful Lady Macbeth. The film also features Paddy Considine as Macbeth's friend betrayed, Banquo, Jack Reynor ("Transformers: Age of Extinction") as Prince Malcolm and Sean Harris ("Mission: Impossible - Rogue Nation") as the raging, vengeful Macduff. Kurzel, whose "Snowtown Murders" was a dark, modern portrayal of human evil, has a haunting, brutal adaptation of Shakespeare's Scottish play. Grade: