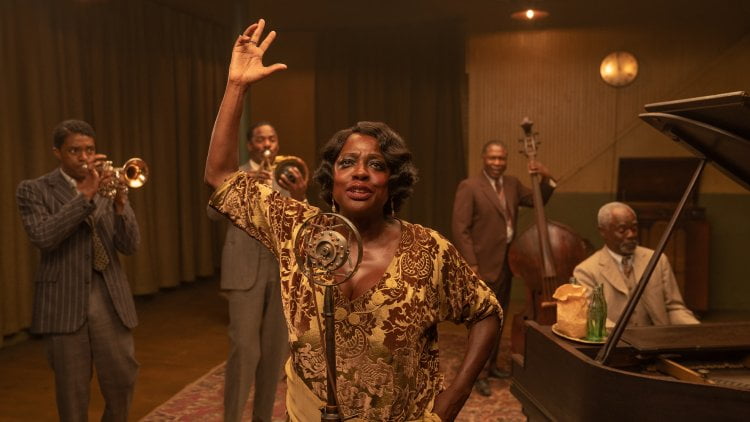 In 1927, ‘The Mother of the Blues’ (Viola Davis) travelled to Chicago to record many of her standards while taking guff from no one.  Ironically the youngest member of her band, her trumpet player Levee (Chadwick Boseman), had a similar ‘take no prisoners’ approach to life that would cause major conflict with his boss when she overrode his and her agent Irvin’s (Jeremy Shamos) preferred musical update to “Ma Rainey’s Black Bottom.”

Director George C. Wolfe’s (HBO's 'The Immortal Life of Henrietta Lacks') production of the 1982 August Wilson play never sheds its stage roots, despite a predilection for pointing his camera at the sky during the film’s few exterior scenes, but his talented ensemble brings Ruben Santiago-Hudson’s (HBO's 'Lackawanna Blues') concise adaptation to vibrant life.  In his last screen performance, the late Chadwick Boseman gives us something we’ve never seen before, breaking our hearts all over again not only with Levee’s character arc, but for what we have lost.  Viola Davis, too, expands her repertoire as the bold, demanding diva covering a heap of hurt as she tries to move the needle forward.

After a brief prologue where the zaftig, heavily made up, gold-toothed Ma Rainey performs in a Georgia tent demanding the spotlight back from her trumpet player, we segue to Chicago where her band precedes her.  Pianist Toledo (Glynn Turman), trombonist Cutler (Colman Domingo) and cellist Slow Drag (Michael Potts) gather in a basement rehearsal room, wondering where Levee is as we see him swagger into a shoe store across the street featuring an eye-catching pair of yellow leather shoes.  These flashy shoes are an outward symbol of the confident trumpeter, although we will learn that like Ma, Levee hides his suffering.

Ma’s arrival is an uproar on many fronts, her new car driven by her nephew Sylvester (Dusan Brown) getting into a fender bender right in front of the studio.  A policeman (Joshua Harto), who immediately favors the white driver and seeks to arrest Ma doesn’t know what hit him when she stands her ground.  She’ll continue to intimidate, first by insisting her stuttering nephew record the intro to ‘Black Bottom,’ then by refusing to continue without her cold Coca Cola, all before her battle royale with Levee and final exhibition of control over Irvin.

Ma knows that Black artists are exploited by white businessmen, as does Levee, but Levee approaches studio owner Sturdyvant (Jonny Coyne) with an ingratiating smile as he proffers his own original music to record with his own band.  He won’t get his way with his more up tempo intro to ‘Black Bottom,’ but he will get around Ma on a more personal level, tapping her actual Black bottom Dussie Mae (Taylour Paige).

Boseman creates a complex character, all joie de vivre on the outside, painful memories fueling him on the inside (he will regale his older bandmates with a chilling childhood tale that sets the stage for the film’s climax).  “Ma Rainey’s Black Bottom” is joyful, spirited and rebellious before its last act brings us down to earth.  We see everything on Davis’s face as she’s driven away, but it is what has driven Levee to his downfall that cuts the deepest.