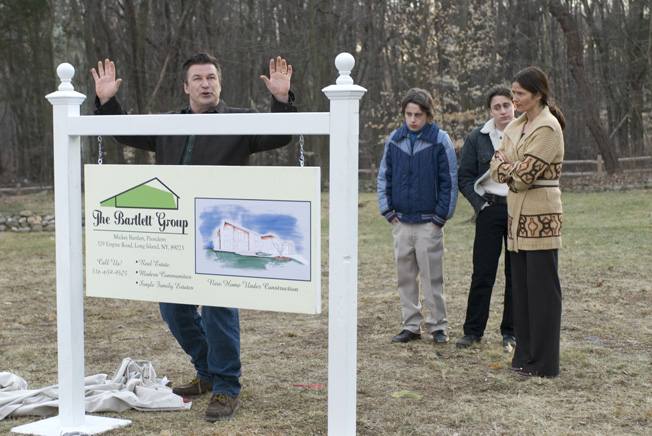 Late 1970’s Long Island and the threat of Lyme disease permeate the lives of 15-year old Scott Bartlett, his family and friends around him. But, parental infidelity, real estate problems and the ever present possibility of contracting the disease makes for a rocky coming of age in “Lymelife.” Robin: Robin 's review coming soon!

Scott Bartlett (Rory Culkin, yup, the little kid from "You Can Count on Me") has been in love with his neighbor Adrianna Bragg (Emma Roberts, "Hotel for Dogs") since he was eight years old, but now that they're sixteen, she tells him she likes older boys. That could be because Adrianna is much older for her age, a lot less innocent. It is Adrianna who has to clue Scott in to the ugly truth his older brother Jimmy's (Kieran Culkin, "Igby Goes Down") been running away from for years - that their dad is a serial cheater, currently sneaking around with Adrianna's mom. There is a disease spreading in 1970's Long Island in cowriter (with brother Steven)/director Derick Martini's ("Goat on Fire and Smiling Fish") "Lymelife." Yet another Sundance entry on suburban malaise that uses dodgy metaphors, "Lymelife" seems like an attempt to do for the end of the 70's what Ang Lee's "The Ice Storm" did for the beginning of that decade. The filmmakers have assembled a very talented and trendy cast, most of whom do very good work with what they have to work with - and therein lies the problem. Just when an actor begins to draw you into a scene, he's usually put upon to utter dialogue so alien to real life that you are yanked right back out of it. The exception here is Timothy Hutton ("Ordinary People," "The Last Mimzy"), who despite having to be the bearer of the titular disease, offers a moving, intelligent and offbeat portrait of a man being kicked when he's down that should, but probably won't, be remembered at year's end. Mickey Bartlett (Alec Baldwin, TV's "30 Rock") is a real estate developer creating his own Long Island Levitttown, a move he expects to make him a millionaire. He surprises his wife Brenda (Jill Hennessy, "Wild Hogs," TV's "Crossing Jordan") with a modern new home on her birthday, but she's dreaming of better days past when they still lived in Queens. Scott thinks his mom's just nuts (she sits on the roof smoking pot as their Thanksgiving turkey burns), but he's got his own troubles fending off bullying Todd O'Leary (Adam Scarimbolo, "Chapter 27") at school while trying to make a more mature impression on Adrianna. He also has to avoid getting shot by Adrianna's dad Charlie (Hutton), who's been obsessing with the deer he bagged the year before. Charlie's suffering from lyme disease, a condition only recently recognized, having come into prominence as American suburbs encroached more and more on wildlife habitats. Charlie's wife Melissa (Cynthia Nixon, "Sex and the City") works as a saleswoman for Mickey, making her and her put upon attitude ripe for the picking. There are many things to recommend about "Lymelife," but ultimately it plays like an indie cliche, damning itself with a manipulatively edited climax that feels like a cheap trick. For every good line ('that's all right, I'll bring you back some leftovers,' Melissa tells Charlie on her way out to a party), there's a groaner. The film's already called "Lymelife," yet the Martini's cannot resist having Brenda dump a box of Monopoly houses on the floor for contemplation. The troubled marriage that is the catalyst for the loss of Scott's innocence is given no subtext and the scene which 'announces' it is played way too broadly. Still, there is a relatibility to an awkward first sex scene, well played by Culkin, and a conversation of double entendres between Charlie and Mickey that Hutton simply spikes. Both Culkin brothers are good, Kieran projecting that perfect blend of teasing protectiveness a good brother shows towards a younger one, Rory a charming naivete that when lost makes him literally ill (the film isn't particularly cinematic, but Scott's upchucking scene is beautifully framed with nice depth of field). Hennessy keeps Brenda grounded in Queens, reflected in her accent and down to earth manner. Baldwin lends no humor to Charlie, playing him as a lout, albeit a lout troubled by the potential emotional loss of a second son. Nixon gains her character no sympathy and Roberts leans towards precociousness as her daughter. "Lymelife" is an interesting failure, a film featuring many good performances but one which squanders any remaining audience good will in its final moments. The Martinis's natural moments are overshadowed by too many pretentious ones.