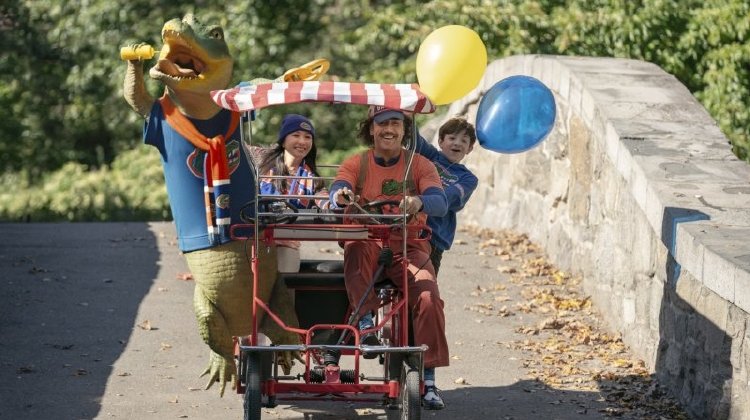 After moving to New York City, Josh Primm (Winslow Fegley, “Come Play”) feels the odd man out at his new school.  But he makes a new best friend in the most unlikely place when he finds a singing, carnivorous reptile left behind in the attic with a note from his new home’s previous owner, magician Hector P. Valenti (Javier Bardem), in “Lyle, Lyle, Crocodile.”

"The Switch" directors Josh Gordon and Will Speck will make you marvel at the technical achievement of their live action animation hybrid but "How to Train Your Dragon's" Will Davies hasn’t adequately tamed Bernard Waber's book series into a smooth adaptation.  The resulting film has many delightful sequences but too many time wasting montages that fail to move the plot forward.  The movie, which runs too long at 106 minutes, feels like it was once longer and cut for time, as characters and plot points are introduced and then abandoned until they are inorganically pulled back in to tie things together.

Valenti, who lives in a run down Manhattan brownstone, has been trying to goose his flagging career by entering the ‘What Have You Got?’ talent show, but he’s thrown out after having auditioned one time too many.  Venturing into an exotic animal shop looking for inspiration, Valenti hears singing and slips into the stock room where he finds Lyle.  The crocodile that can sing but not talk works enthusiastically with Hector, but after Valenti secures a booking with the deed to his home as collateral, Lyle freezes with stage fright when faced with an audience.   Valenti’s forced to hit the road to earn some cash, leaving Lyle behind.  Eighteen months later the Primms move in.

Upon discovering the croc is real, Josh is initially terrified, but Lyle quickly wins him over, luring the young boy out at night to discover the joys of restaurant dumpster diving along with Loretta, the fussed over (CGI) Persian cat owned by the unpleasant Mr. Grumps (Brett Gelman) who lives in the brownstone’s basement apartment.  We’ll go through this exercise twice more with Mrs. Primm (Constance Wu), then Mr. Primm (Scoot McNairy).  Mom, a former cookbook author, enjoys an extraordinary full contact kitchen dance sequence with Lyle to “La La Land’s” songwriters Benj Pasek and Justin Paul’s ‘Rip Up the Recipe’ while math teacher dad, a former wrestling champ, gets an ego boost when Lyle throws a bout his way.  Obstacles to Primm family happiness with Lyle arrive with the machinations of Grump and a betrayal by Valenti before everything is set right with a big, show stopping climax.

The film is graced with a charming lead in Fegley, but a delightfully animated Lyle is saddled with the wrong voice in Shawn Mendes (a gruffer, soft purr would have sold the character better than a light pop tenor).   An oversized (in a good way) performance from Javier Bardem as magician Hector P. Valenti and the comic villainy of Gelman prop up routine turns from Constance Wu and Scoot McNairy as Josh’s parents.  The production gives New York City the artificial flair of the children’s books from which it derives.  “Lyle, Lyle, Crocodile” is good enough to pass muster and maybe even launch a franchise where the kinks can be worked out.

Not-so-good magician Hector P. Valenti (Javier Bardem) is down on his luck and needs to “show something not seen before.” A fortuitous visit to Eddie’s Exotic Animal Shop, later, and he finds that “something,” but things do not work out as planned for “Lyle, Lyle, Crocodile.”

We have seen, over the many years, cute little characters like Paddington Bear and Stuart Little grace the screen and entertain us all. But, I have to admit, I have never heard of Lyle Crocodile. (To my defense, I lived a sheltered life.) So, I did not know what to expect. What I got was a run-of-the-mill family movie that introduces us to a 7-foot tall (long?) crocodile that can sing. And, that is what we get with “Lyle.”

Hector’s big plans for Lyle fizzle out when they make their big on-stage debut and the young crocodile is crippled by stage fright. Go to Plan B and the magician spends all he has preparing his reptilian ward for another, more successful debut. He hocks his house, books a sold out venue and – nothing. Lyle cannot sing in public. Soon, Valenti is forced to leave – without Lyle.

The old brownstone is put on the market and the Primm family – mom (Constance Wu), dad (Scoot McNairy) and their nervous son, Josh (Winslow Fegley) – soon move in. They start to settle into their new life when Josh, alone in the house, hears a noise in the attic. Investigation reveals a 7-foot tall stuffed crocodile. The boy soon realizes that the croc, named Lyle (Shawn Mendes), is not stuffed but very alive and can sing!

What follows is pretty routine as Josh and Lyle become BFFs, mom and dad meet their new roommate and a nosey neighbor, Mr. Grumps (Brett Gelman), wants the family to move out. The result is a live action-animation that is full of song (though Lyle’s singing is a pitch too high) and imaginative choreography between mom and Lyle, in an inventive cooking scene, and a fun song-and-dance with Hector and Lyle.

Since I do not know anything about the popularity, with kids, for Lyle Crocodile, it is hard to judge if “Lyle, Lyle, Crocodile” will be a hit or not. It has a lot of heart, bright and colorful action, dance and songs galore and a big, singing crocodile so I have hope for it.