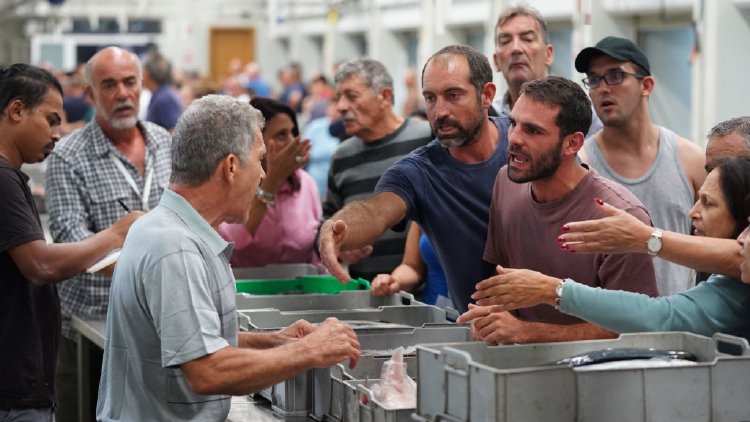 Jesmark Salika (Jesmark Scicluna) loves making his livelihood in the same way his father, grandfather and great-grandfather did before him, by traditional fishing off the coast of Malta.  But his wife, Denise (Michela Farrugia), who was happy to support him before is becoming more critical of his meager income now that they have a newborn, Aiden, especially given that Aiden requires special care which costs money.  Resistant to change, Jesmark begins to see that those who are doing OK are either working illegally or have decommissioned their fishing boats for an EU payout just when he’s facing additional expenditures to repair his leaking “Luzzu.”

This winner of the 2021 Sundance World Cinema Dramatic Special Jury Award from writer/director/editor Alex Camilleri, whose parents hailed from Malta, is a depressing look at how modernization and corruption wipes out local economies and tradition.  Camilleri, who had no knowledge of the fishing industry, cut his teeth by making short films with Jesmark and David Scicluna, the two Maltese fishermen who would become the leads of his feature, but while Jesmark’s situation engenders much sympathy, the non-actor keeps us at arm’s length.  “Luzzu” is certainly an involving film, one which ushers us into an unfamiliar locale and different way of life, but its downbeat message is disheartening.

We meet the man out on his twelve foot, blue, yellow, red and green luzzu motoring back to shore as his hull fills with water.  He’s barely on shore when an old woman begs a fish from his scant catch, trying to take his biggest.  David (Jesmark's cousin, David Scicluna) tells him his boat cannot be fixed with caulking because it has a structural problem requiring wood to be replaced.

Jesmark joins Denise at the doctor’s office where they are told that Aiden isn’t growing properly and will require a special diet and appointments with specialists.  Denise begins to lean on her mother, who disapproves of Jesmark, for help, adding more stress to their relationship.  Out fishing with David, Jesmark hauls in a swordfish, a catch worth 50 Euros, but David insists it be tossed back to sea because its season is over.  Jesmark is furious, but as they dock, an inspector boards the boat, looking just where Jesmark had planned on hiding the fish.  The two men are then undercut by the fish market vendor, who throws them out when Jesmark objects.  Unable to sell their catch privately, it goes bad.  Later that evening, Jesmark witnesses Uday (Uday McLean) take receipt of swordfish at the market’s loading dock.  He goes in to confront him and ends up getting a job cleaning fish when he demonstrates his ability to ‘create’ scallops from skate wings.

This docudrama boasts vibrant cinematography (Léo Lefèvre) and a complex yet clearly told tale of one man’s struggle against inevitable economic realities, but Jesmark’s betrayal of a friend’s good faith makes him a difficult character to root for.  Camilleri’s anthropomorphization of Jesmark’s luzzu in the film’s last act exacerbates the bad feeling his choice, and the timing of his choice, leaves us with.  Still, with “Luzzu,” the filmmaker calls attention to the plight of those trying to maintain an honest living in a corrupt world.

Jesmark (Jesmark Scicluna) is a fisherman plying his trade on the island of Malta, just like his father, grandfather and great grandfather before him, with all using the same boat, passed down for generations. But, hard times, climate change and a failing fishing industry put his ability to support his wife, Denise (Michela Farrugia), and newborn son in jeopardy in “Luzzu.”

Writer-director Alex Camilleri takes on several hot topic items to explore in his character study of Jesmark. Like many not prepared for the burdens imposed by our accelerating climate change, Jesmark desperately holds onto the beliefs that his family’s past way of life as a fisherman will continue. Reality, though, comes down on him like a hammer.

His faithful boat, the “luzzu” of the title, has sprung a leak and needs extensive repairs, not just a patch job. And, government regulations put increasing restrictions on what can be caught from the fast diminishing (again, climate change is the culprit) fish supplies in the sea.

The story follows Jesmark as he hustles, 24/7, to support his wife and baby as he works, with his friend and boss, to bring in their tiny hauls for sale at the local fish market. But, the new fish hawker has a grudge, for some reason, against Jesmark and refuses to give him anything close to top dollar. Now, he has to hustle to sell what they have before it goes bad. All the while, Denise pressures him to make money and, even, takes a job to support her family – leaving her husband as the emasculated babysitter.

“Luzzu” may be a simple story about surviving in a new and different world. But it also delves into traditions and how, because of our times, they can be left by the wayside. It is a melancholy, if not downright sad, story that, unfortunately, is playing out for millions, if not billions, around the world.

For information on how to see the Kino Lorber release "Luzzu," click here.