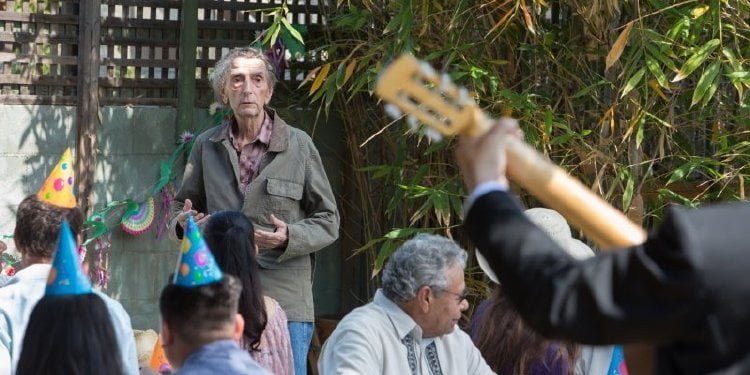 A ninety year-old man lives alone on the edge of a desert town. He's religious about his morning routine which begins with a cigarette and ends with twenty-one repetitions of five yoga poses to Mexican radio. He walks into town, stopping at Joe's (Barry Shabaka Henley, "Paterson") diner during the day and Elaine's (Beth Grant) bar at night where everyone affectionately anticipates the quirky philosophies and independent rebellions of "Lucky."

Character actor John Carroll Lynch ("Fargo," "Zodiac") makes his directorial debut with this autobiographical homage to the late, great Harry Dean Stanton. It's a stunning swan song, writers Drago Sumonja and old Harry Dean pal Logan Sparks gifting the actor the equivalent of David Bowie's 'Blackstar.' The film is sentimental, but never cloying as Lynch connects various members of a community via the man who regards himself a loner. The film opens with a shot of a tortoise slowly making its way across a desert vista from the right to the left of the screen. As Lucky faces his morning, Lynch and his cinematographer Tim Suhrstedt ("Little Miss Sunshine") focus on his aging yet remarkably spry body and the ashtray which greets each day with two cigarette butts. At Joe's, hunched over his perennial crossword puzzle, Lucky asks 'Is realism a thing?' It's a tricky question, because Lucky has a problem with its definition. What he sees is not what anyone else sees. This is Lucky in a nutshell, an atheist who believes we come from nothing, return to nothing and, indeed, are nothing. Yet a sudden, inexplicable fall forces Lucky to confront his own mortality and he appears surprised by how much this scares him, something he only admits to Joe's waitress Loretta (Yvonne Huff) when she stops by to check in on him. Lynch has assembled a unique supporting cast to accompany Harry Dean through the everyday events that take on new meanings. As his doctor, Ed Begley Jr. admits that his patient's extraordinary health defies medical knowledge, suggesting that quitting smoking at this stage may be more detrimental than beneficial. The scene is darkly humorous. Stopping at Bibi's (Bertila Damas) for milk, Lucky's invited to her son's 10th birthday fiesta. Lucky dubs him 'Juan Wayne' but doesn't commit. At Elaine's, Lucky's buddy Howard (David Lynch) laments the loss of President Roosevelt, the tortoise that has 'outlasted two wives' but escaped through an open gate. This gives way to a discussion on man's relationship to animals, Lucky later haunted by the mockingbird he accidentally shot as a kid (the song stopped, the silence awful). Elaine's 'man' Paulie (James Darren, "Gidget") considers his good fortune in the woman who's been by his side for so many years, wondering at Lucky's single life, suggesting there is always still time. Lucky will be struck by Bibi's mother Victoria (Ana Mercedes, "Knocked Up"), serenading her in Spanish at Juan's fiesta. It's a heart stopping moment of melancholy beauty. But it is at Elaine's that Lucky will make his last stand, threatening to 'light up,' then, after lively debate, doing just that, defiant beside the establishment's 'Thank you for not smoking' sign. Lynch's wrap is perfection, a visual representation of Lucky coming to terms with life itself and the world continuing without him. Music is integral, the Mexican mariachi, old Western songs played on harmonica and Johnny Cash's 'I See A Darkness' the aural representation of our protagonist. The screenplay sets up existential questions, then calls back to the answers throughout. The random stranger (Tom Skerritt), a Marine Lucky strikes up a conversation with at Joe's, provides a profound one with a wartime recollection (we also learn how Lucky got his nickname). Connections run deep, the mysterious person at the end of Lucky's red princess phone most compelling when he or she fails to answer Lucky's last call. We lost a beloved legend when Harry Dean Stanton died on September 15. John Carroll Lynch's "Lucky" brings him back to us and that ain't nothin'. Grade: