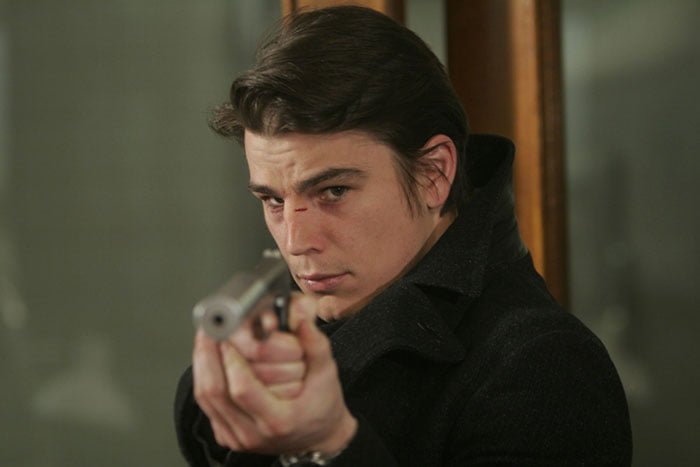 Slevin Kalevra (Josh Hartnett) is a happy-go-lucky guy without a care in the world. That is, until a case of mistaken identity thrusts him into the middle of a gang war between one kingpin called The Rabbi (Ben Kingsley)and another called The Boss (Morgan Freeman). He is also under the scrutiny of a suspicious detective (Stanley Tucci) and is being hunted by an assassin named Goodkat (Bruce Willis). Hopefully, our hero will straighten everything out and prove that he is, indeed, “Lucky Number Slevin.”

Slevin” starts off well enough as the title character arrives in New York City to visit his old buddy Nick (Sam Jaeger). Nick’s apartment is empty of its occupant and Slevin goes about making himself at home. He meets Nick’s pretty, kooky girl next door, Lindsey (Lucy Liu), the coroner at the local morgue, who is immediately attracted to the handsome young stranger. Things are looking up for Kalevra until there is an urgent banging at his door. He answers with just a towel around his waist only to be me by a pair of hulking thugs there to take him to meet The Boss. Immediately. The meeting doesn’t go too well as The Boss tells Slevin that he (thinking that the lad is Nick) owes him a cool $96000. Slevin can clear the debt easily, though. All he has to do is perform one simple hit - on the beloved son of The Rabbi, The Boss’s sworn enemy. The son, Yitzchok the Fairy (Michael Reubenfeld), is protected by two heavily armed, ex-Mossad bodyguards who stick to their ward like a second skin. The Rabbi also tries to recruit Slevin to act against his mortal foe. Complicating things is the arrival of Detective Brikowski (Tucci) who wants to use Slevin to bring down the gang lords. Goodkat, too, appears to want Slevin’s blood. The first half of “Lucky Number Slevin” is a wry, darkly funny tale of a who-done-it (well, everybody done it) that has Slevin as a pawn at the hands of the powerful gangsters. But, the smart and resourceful young guy is fully prepared to risk limb, and maybe life, to outwit the mobsters and clear his good name. He has his work cut out for him as gang bosses will stop at nothing in their quest to destroy each other. Hartnett is charming as the ever-smiling (even after getting beat up) Slevin as he recruits Lindsey to help clear his good name. This good-natured noir is terrifically amusing and likable for the first hour. Slevin faces every adversity with stoicism and humor, taking harsh beatings without blinking an eye. He simply wants to clear his name and keep from getting perished. This half of “Lucky Number Slevin” is darkly amusing, witty and worthwhile but, when Slevin’s real agenda kicks in, the film deflates and loses its blackly funny edge. I don’t want to delve into the second half of “Lucky Number Slevin” so as not to spoil it for others, but the wind come out of its sails as the case of mistaken identity turns to a tale of revenge and double, triple, even quadruple cross. The acting is uniformly solid up and down the wonderful cast. Hartnett plays well off of veteran thesps Freeman, Kingsley and Willis, holding his own with these movie icons. Lucy Liu is positively adorable as the next-door neighbor who enthusiastically throws herself in helping her new love interest. The rest of the supporting cast does good work filling in the background characters. Techs are good with lenser Peter Sova giving appropriate noir to “Slevin” and production design and set design well done. Unfortunately, the script, Jason Smilovac, loses its dark and funny edge as Slevin’s real agenda unfolds. I started out really liking it but, in the end, it falls flat.