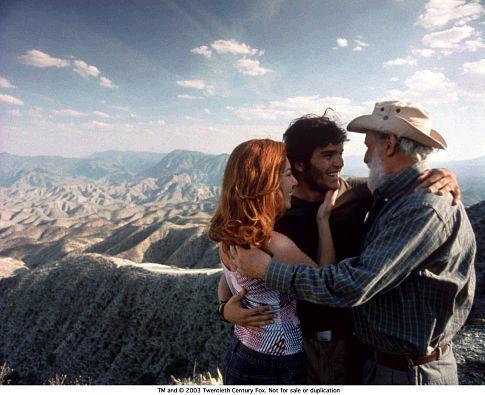 Lucia (Cecilia Roth, "All About My Mother") is excited to be spending New Year's at Rio's Copacabana beach but when her husband Ramon disappears into a men's room at Mexico City's airport Lucia spends the holidays and ensuing months having a far different kind of adventure in "Lucia, Lucia."

Writer/director Antonio Serrano, adapting the novel by Homónima de Rosa Montero, has created a multi-generational madcap lark that attempts to address a middle aged woman's rebirth, marriage, kidnapping, revolutionaries and government corruption within a children's book author's whimsical framework that eventually overextends its welcome with its myriad detours. The journey is made less tiring, however, by Roth's luminous performance which is perfectly balanced between those of her wistful older and lusty younger costars. Lucia returns to her home and is offered assistance by Felix (Carlos Álvarez-Novoa, "Son of the Bride"), a 70 year old gentleman who lives downstairs. The duo return to the airport to look for clues and celebrate New Year's in the men's room with a sparkler (Lucia's propensity to storm men's rooms is a cute gag the filmmakers should have continued). After a ransom call from 'Workers' Pride' demanding more money than Lucia has, she receives flowers with a note from her husband directing her to a safe deposit box where he's stashed Aunt Antonia's inheritance unbeknownst to her. Lucia is astonished to discover 20 million pesos, but as she and Felix drag their overstuffed bag into their apartment building, they're mugged by three thugs. Felix shocks Lucia by drawing a gun (which jams, but effectively rids them of the intruders) while a young neighbor from upstairs, Adrián (Kuno Becker, a cutie to give Gael García Bernal a run for his money), is concussed trying to assist. Now that the trio has been assembled, we learn that Felix is a leftist idealist who trained with Castro in Cuba and fought against Franco in the Spanish Civil War. Lucia has relit a sparkle in the recent widower's eyes. Adrián is a violinist and gorgeous young stud who takes every opportunity to whisk off his shirt in the seduction of Lucia, who resists on the basis of both trust and age difference. Adrián comments on the action by quoting philosophers, one of the film's more charming running gags, and voices the movie's leitmotif ('A true journey of discovery isn't about changing our surroundings but about the way we see.'). After an attempted ransom delivery in a shopping mall is bungled due to the incompetence of Inspector García (Javier Díaz Dueñas) and his police, the threesome begin their own investigation and take to the road (á la "Y Tu Mama") where they'll have run-ins with arms dealers, murderers and the coke-snorting Blanco (Jorge Zárate, "The Crime of Father Amaro," in a highly-caffeinated, amusing performance). Lucia realizes she doesn't want Ramon to return even before she learns that he's been embezzling money in his job with the Treasury, in cahoots with the very group who claim to have kidnapped him. I haven't even mentioned the killing of a dog, police corruption and appearance of Lucia's squabbling soap star parents, Amparo (Margarita Isabel, "Chronos") and Pablo (Héctor Ortega), the 'cannibal' of the film's original title - whew! "Lucia, Lucia" would have benefited greatly from a story re-edit and streamlined running time. Unlike the mysteries of the recent "Swimming Pool," Lucia informs us up front that 'My apartment doesn't really look like that. Neither do I.' While this device allows for an exaggerated style of filmmaking that verges on magical realism, it lends little else to the story except for a final reveal of the 'real' Lucia. The film does has many moments that shimmer, beautifully visualized by Serrano. Adrián whispers 'Te amo' in Lucia's ear as she holds his hand during an earthquake in a supermarket that sets its Valentine's Day heart decorations all a flutter. Lucia and Adrián's romance finally gets physical as we see them amidst a huge group of line dancers in a C&W club while Felix graciously retreats. Little visual flourishes, such as having Felix, Lucia and Adrián riding a store's up escalator be reflected by a trio of costumed Wise Men on the down escalator behind them, add to the fantastical nature of Lucia's world. "Lucia, Lucia" keeps rolling along after it's run out of gas, but Roth, Álvarez-Novoa and newcomer Becker are always interesting travelling companions.

Based on the play and adapted to the screen by J.C. Lee (with director Julius Onah), the story centers on the remarkable young man, Luce Edgar (Kelvin Harrison Jr.), who, in a few short years, rose from being a refugee to the level of honor, both intellectually and athletically. Luce’s response to a class assignment from Mrs., Wilson – write a paper using the voice of a historical figure. Luce’s choice – West Indies revolutionary Franz Fanon – with his violent rhetoric against oppression, raises a red flag for his teacher. This prompts Wilson to do a pre-emptive search of Luce’s school locker. What she finds prompts the controversy that will shake the Edgar family to its very foundation of love and trust. Sharing Luce’s spotlight is Naomi Watts as his fiercely devoted mom, Amy, who, despite some doubts, stands by her son. Tim Roth fares less well as Luce’s doubting father, who seems too willing to side against him. Octavia Spencer does yeoman’s duty as Harriet Wilson, whose character is given more nuance and sympathy when her mentally ill sister, Rosemary, intrudes, again, in her life. Marsha Stephanie Blake gives a powerful, and notable, performance as Rose. Misunderstanding and suspicion of those different from us colors the story of “Luce,” which, I feel, is endemic in our society, right now.