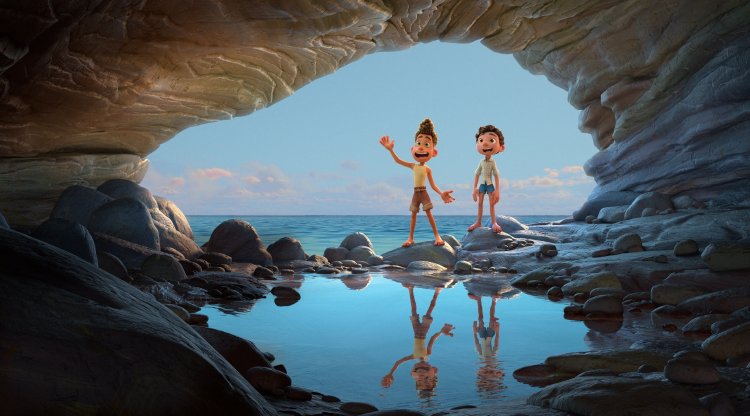 Two fishermen enjoying their phonograph just off the Italian coast are so startled by something they see in the water, their record player tips overboard and sinks to the bottom.  They think they’ve seen a sea monster.  And they have.  His name is “Luca.”

Director Enrico Casarosa of the Oscar nominated short animation "La Luna," makes his feature debut with this charming fish-out-of-water tale that celebrates acceptance along with all things peculiar to the Italian Riviera.   The film has echoes of Casarosa’s short, the over protective underwater parenting of “Finding Nemo,” “Aquaman” and even Justin Benson and Aaron Moorhead’s body horror “Spring,” yet its playful tone stands apart.  “Luca” should make you laugh.

Luca Paguro (voice of Jacob Tremblay) spends his days as a shepherd to a school of silly looking fish, his mother Daniela (voice of Maya Rudolph) keeping him under her watchful eye (dad Lorenzo (voice of Jim Gaffigan) is a lot less engaged, usually found behind his paper).  Luca’s heard about land adventures from his mischievous Grandma (voice of Sandy Martin, TV's 'Ray Donovan') but he always stops short of leaving the water.  Then one day as he gazes at the shore he’s pulled onto it by Alberto Scorfano (voice of Jack Dylan Grazer, "It"), a sea monster like himself.  When Luca’s mom finds out he’s ventured onto land, she decides he’ll spend the summer in the darkest depths with Uncle Ugo (voice of Sacha Baron Cohen), a creepy translucent bottom dweller.

Writers "Me and Earl and the Dying Girl's" Jesse Andrews and "Soul's" Mike Jones form a fast friendship between the boy kept under his mother’s thumb and the one who’s been abandoned by his dad and find them a new family on land with Giulia (voice of Emma Berman), the daughter of widowed, one-armed fisherman Massimo (voice of Marco Barricelli), who embraces the boys’ uncanny ability to find fish.  The lads, who look human as long as they remain dry, are intent on procuring a Vespa to ride their way to freedom, a goal that dovetails with Giulia’s desire to beat Portorosso’s five time triathlon winner Ercole Visconti (voice of Saverio Raimondo).  Giulia will tackle the swimming, Alberto the pasta eating and Luca the final bicycle ride up and down a steep hill.  Meanwhile Daniela and Lorenzo have come on land and begun throwing water on every young boy in town in order to identify their son and it isn’t lost on any of the Paguros that Portorosso’s monuments favor the slaying of sea monsters.

The animation is as bright as an Italian summer sky, the sea monsters’ transitions into and out of their human skins artistry in action.  The filmmakers incorporate everything from gelato to Leonardo’s flying machine, the soundtrack dotted with 60’s Italian pop, everything organic to the story.  Sight gags goosed by their abruptness abound.  The boys’ friendship encompasses risk taking (‘Silencio, Bruno!’ the mantra subduing internal fears), support and ultimately sacrifice.  “Luca” is a sweet summer treat.

Luca (Jacob Tremblay) is a young sea monster who tends his goatfish flock and dreams of adventures – though not to the surface where the human monsters rule. One day, he meets another venturesome mer-boy, Alberto (Jack Dylan Grazer), who convinces his new friend to join him in adventures – on the surface! – in “Luca.”

Having been a Pixar fan from the very beginning (I fondly remember seeing that little lamp for the first time), I am always delighted when they bring us a brand new story. Here, we have the adventures of Luca and Alberto as they emerge from the sea and spontaneously turn into human form, except they cannot get wet if they want to pass as people. While Alberto is an old hand on land, Luca has to learn how to walk and act human. Together, they head into Human Town to see what action they can find, especially in the form of a coveted Vespa motor scooter.

The best of Pixar studios are, arguably, “Toy Story,” “Finding Nemo” and “Monsters, Inc.” But, there is not a bad one in their copious output since that little goose-neck lamp shined its light into our lives way back when. The adventures and misadventures of Luca, Alberto and their new human friend Giulia (Emma Berman) make up the bulk of the story.

The trio has a plan – enter the famous Italian triathlon, the Portrosso Cup race, where the three challenges are biking, swimming and eating. (It is Italy after all.) But there is an obstacle – there are actually many for the three, but I digress – in the guise of Ercole (Saverio Raimondo), the local bully who likes to eat and plans to win the race himself. Oh yeah, and Luca’s dad (Jim Gaffigan) and protective mom (Maya Rudolph) come on land to find their boy.

There is more going on in this charming variation on a fish-out-of-water story that has obstacles, dangers, friendships, understanding others and, above all, love for one another. Pixar, once again, gives us a for-all-ages tale that is both thoughtful and fun.