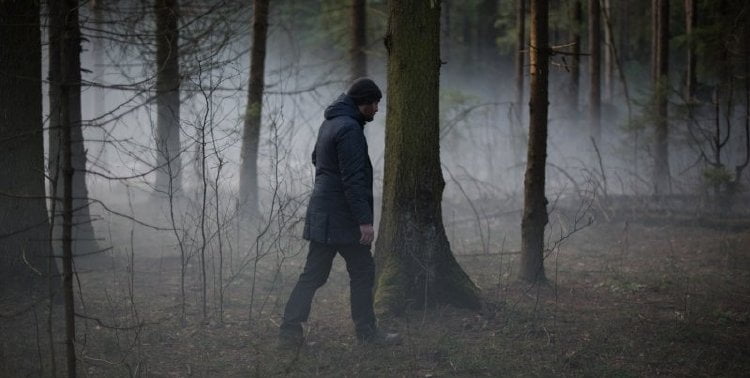 When Boris (Aleksey Rozin, "Elena," "Leviathan") gets home from work, Zhenya (Maryana Spivak) tells him about the showing of their large Moscow apartment. Both anxious to move on, their conversation turns vicious, neither wanting the responsibility of their 12 year-old son Alyosha (Matvey Novikov) who, unbeknownst to them, hears everything. After an evening spent with her older, wealthy lover Anton (Andris Keishs), Zhenya returns home to an empty apartment with no sign of Alyosha and a long search begins in "Loveless."

Cowriter (with "Leviathan's" Oleg Negin)/director Andrey Zvyagintsev's second Oscar foreign language nominee is another critique of Russian society, even more devastating than his last. Featuring stunningly bleak cinematography from Mikhail Krichman ("The Return," "Leviathan") complemented by Evgeniy and Sacha Galperin's ("The Family") stark score, "Loveless" offers a dark forecast for humanity. After we've observed her treating her son as nothing but an annoyance, we see Zhenya getting pampered at her salon, talking about Anton who, at 47, has a grown daughter away at school. The harried housewife, now sleekly stunning, enjoys fine dining with her lover, telling him her awful mother never cuddled her. When we see Anton Skype with his daughter, her resemblance to Zhenya is uncanny. Boris drives to the office listening to news of a prophesied apocalypse, depression, alcohol and suicide. At work, he questions a coworker about their Christian boss's outlook on divorce. Against company policy, he's told. But Boris has a solution in the wings, his heavily pregnant girlfriend Masha (Marina Vasileva). As Masha shops for baby clothes, she assures her mother that she is 'handling' Boris. When Zhenya calls Boris at work to tell him their son is missing, accusations fly. Aloysha's friend is questioned and tells of an abandoned building they often played in. Police inspector Ivan (Aleksey Fateev) instructs search party volunteers, the extras portraying them the only people showing concern for others. The building, once a beautiful apartment complex, is now as abandoned and neglected as the missing child. Boris finds his son's jacket. Later, called in by Ivan to identify a body, Zhenya's insistence that the mutilated corpse is not her son leaves us guessing, Zvyagintsev's four principals are excellent, Anton a confident, more successful version of the lost Boris, both consumers of dire newscasts. Zhenya and Masha alike look for happiness in men, Zhenya as sophisticated career woman, Masha as stay-at-home mom. A few years later, none appear happy, Boris plopping his new blond son into a playpen where the child wails, Zhenya alleviating her boredom on a balcony treadmill. For all their desired life changes, they are stuck in place. Krichman's camera observes the workers stripping the old apartment for renovations, then floats out of the window to where children play. An old missing poster featuring Alyosha has faded on a pole, the red and white tape he'd whipped into the branches of a tree in the film's opening minutes the only evidence of his presence. "Loveless" is elegant in its production, stern in its warning of an increasingly self absorbed society. This film will haunt you. Grade: