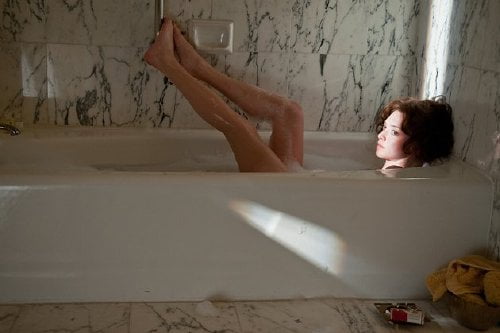 Except that that first statement isn't exactly true, it's just how it's depicted in screenwriter Andy Bellin's ("Trust") adaptation of Lovelace's book 'Ordeal.' Directors Rob Epstein & Jeffrey Friedman ("Howl") have attempted to make a 70's style film about the infamous porn actress turned anti-porn crusader, but instead cinematographer Eric Alan Edwards' ("Couples Retreat") Super 16mm lensing is inconsistent and the movie plays more like a made-for-Lifetime TV biopic than an artifact of the era. Seyfried's little girl lost performance is a symptom of a story that feels too black and white, whitewashed to present its subject as the ultimate victim. The filmmakers' best idea was to feature Eric Roberts in a cameo, but "Lovelace" is a far cry from "Star 80." After a cliched montage of media coverage of Lovelace (that ends with 'Who is Linda Lovelace?) the filmmakers plunk us down in Florida, circa 1970, where Linda is objecting to her friend Patsy's (Juno Temple, "Killer Joe") having undone the back of her bikini as she sunbathes, alone except for her friend in a private back yard. This Linda is apparently a super prude, but when she and Patsy go rollerskating and get invited to Go-go dance with the live band, Linda opens up, enjoys the attention and catches the eye of Traynor. The filmmakers' method is to present a straightforward version of events, then go back and show them again from an abusive context. The constant use of timeline titles almost becomes a joke (Seyfried's various wigs pinpoint the action anyway). The blissful honeymoon montage (scored with the upmteenth use of Norman Greenbaum's 'Spirit in the Sky') is revised with a scene of a forced, painful sexual act. The vigorous sex heard from the Traynors' room during the "Deep Throat" shoot turns into a beating. The high water mark of a celebrity-studded Hugh Hefner (James Franco, miscast) private screening takes on a predatory edge. The jump from Traynor's need for cash to the "Deep Throat" audition is filled in later with him selling coke and his wife to a conventioneer. So why is Linda still so naively wide-eyed and fresh-faced at that audition? Seyfried, who looks nothing like Lovelace, doesn't get any deeper into her role than the filmmakers' flawed vision, but Sarsgaard, all moustache and mutton chops, is able to convey Traynor's charm disintegrating into entitled opportunism. Still, the performance will do nothing to erase Roberts' rabid Paul Snider turn. Stone, harshly aged here, was perhaps hoping that alone would garner her notice. Cannavale and Hank Azaria ("Smurfs 2") are 'good guy' porn players (Azaria plays "Deep Throat" director Jerry Damiano) and Adam Brody ("Damsels in Distress") is a sweet and supportive Harry Reems. In another bit of confusion Wes Bentley ("The Hunger Games") is photographer Larry Marchiano, who pleases Linda by making her look beautiful, but Larry Marchiano was the cable installer Linda later married (and if that's Bentley playing him in later scenes, it's one hell of a makeup job). (Chris Noth, 'Sex and the City's' Mr. Big) is the film financier Anthony Romano who, according to this version, saved Lovelace from the husband who owed him thousands. The film talks more about sex than showing, the porn shoot a family affair (and to hear tell here, the only porn film Lovelace ever did). There's only a couple of scenes which really disturb (Traynor takes an envelope stuffed with cash and leaves Linda for a hotel gang bang; the police intercede on the couple fighting in the street and back off when they recognize her). The film ends with a forgiving family reunion which rings false before some ending titles which tells us Linda's cut from the $600 (a debated figure) million grosser ($1,250), relay the details of her and Chuck's deaths (romantically linked!) and the only truly astonishing fact (to me anyway) - that Traynor went on to marry "Behind the Green Door's" Marilyn Chambers.