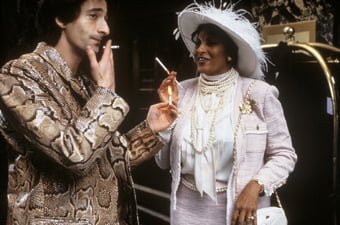 When con man Jack (Adrien Brody, "The Pianist") meets college student Claire (Charlotte Ayanna, "Kate & Leopold") there's an attraction, but their two distinctly different worlds will mean theirs will be a "Love the Hard Way."

German cowriter (with Marie Noelle)/director Peter Sehr gets points for trying something different, but his radical choices, incoherent storytelling and truly head-scratching ending add up to an intriguing failure. Star Adrien Brody has always been interesting to watch, while the lesser known Ayanna does as well as the script will allow her with its non- spiritual twist on "Breaking the Waves's" Bess McNeill. Jack sports a wild mane of black hair, wears a tan snakeskin jacket, fuels his chain smoking with a Mozart-playing lighter and claims to have slept with 200 women. He makes his living with his best buddy Charlie (Jon Seda, "Undisputed") masquerading as New York's finest and shaking down Asian businessman with planted 'hookers' in hotel rooms singled out by partner/hotel receptionist Jeff (August Diehl, "Anatomy 2"). Jack frequents films at a run down movie house where he has a confrontational first meeting with lovely Columbia student Claire. When he happens to be striding through that school's campus with Charlie, he runs into her and her friend Debbie (Katherine Moennig, "The Shipping News"), enthralling one and enraging the other. (Charlie defends himself and his friend from the irate Debbie with a line out of an old B movie - 'The only way you got out of our neighborhood was in a squad car, ambulance or hearse.') Jack pursues Claire into the school where the appearance of her preppy boyfriend inspires him to blurt out a time and place for a date. Of course, she shows up and all seems wonderful, including a lengthy lovemaking sequence that begins on a staircase and ends in Jack's bed. From this point on, Jack makes every effort to dump Claire, although he clearly seems to care for her. Director Sehr never gives any indication why this is so except for Claire's explanation to Debbie that he's shy, a quality the audience never sees in Jack. Claire begins to act like a stalker and briefly wins Jack back, but when she discovers him in bed with one of his working girls, she goes off the deep end and declares herself dead. A passing stranger asks Claire if she's looking for a date (the girl couldn't look less like a streetwalker) and she begins a descent that brings her below Jack's level. While Jack's actions are often inexplicable, Brody does a fine job balancing tenderness with the impish streak he unveiled while accepting his Pianist Oscar. There is a lovable being beneath the criminal wiseass. Ayanna has tougher obstacles and migrates from cheerful school kid to Emily Watson's clear-eyed faith to apathetic debauchery. Seda is a good sidekick, helping to soften Jack's character and Diehl provides an exotically decadent flavor with his bleached punk look and German accent. Sehr (and possibly controversial Chinese novelist Wang Shuo, whose book, "Fire and Ice," this film is based on) appears to be influenced by Lars von Triers' female martyrdom themes, but he never builds sufficient motivation for his characters actions. The film makes random shifts, creating an unsettled feeling. We see Jack in a storage unit decked out like an office several times before Sehr lets us know that Jack is writing a novel (perhaps a metaphor for Jack's boxed up emotions?) but it's not effectively integrated into the film. Debbie's character is around to warn Claire away from Jack, but when Claire's downfall truly begins, Debbie is nowhere in sight. An undercover cop played by Pam Grier keeps popping into and out of the film for no apparent reason other than to lend indie cred - her late interest in Jack's love life is a misguided attempt to reassert Claire's sacrifice while Jack pays his penance in the purgatory of Rikers. Editor Christian Nauheimer uses a flashforward-by- seconds editing technique twice to little effect other than artsy confusion. Dialogue is sometimes muffled and difficult to follow. Yet, "Love the Hard Way" is so damn weird in refusing to go where one expects that it maintains interest - too bad it missed a chance at last minute redemption with a satisfying conclusion. It's not a successful film, but it is a thought provoking one.

Jack (Adrien Brody) is a New York City con man plying his trade with his partners as fake cops busting unsuspecting johns for whatever they can rip off the marks. He is attracted to a pretty young woman, Claire (Charlotte Ayanna), a biology grad student, and they begin dating. But, their very different lives will prove to be a major obstacle for the couple when they try to find "Love the Hard Way." German director Peter Sehr comes to New York City with his adaptation (with Marie Noelle) of Chinese novelist Wang Shuo's book Fire and Ice. It is a black and white world, with Jack's life representing the dark side of things and Claire's depicting the innocence of an ivory tower naïf. But, when these two worlds come together, the nebulous gray area between them grows and the lives of the two change forever. Jack is always looking for a con. He and his friend, Charlie (John Seda), have a good thing going with their patented technique for scamming foreign johns looking for action in the Big Apple. The pair set up their marks with a couple of faux hookers and, just when the deed is about to consummate, they break into the hotel room dressed as cops and roust their victims, taking money and watches in lieu of arrest. But, they are also under the watchful eye of vice detective Linda Fox (Pam Grier) and this soon poses problems for the grifters. Meanwhile, while leaving a movie theater, Jack banters with the pretty ticket taker, Claire, and a flirtatious liaison begins. Jack is not the commitment type but Claire's fresh innocence is too strong a draw for him to ignore. As the couple's life becomes more and more intertwined, Jack begins to soften his hard edge while Claire loses her cloak of virtue. When he finally tries to make a break with Claire, she does not handle the rejection well and slips into a life of prostitution to both spite and attract him back to her. Her new life style, however, drives him into despair. This is not a Cinderella story where everyone lives happily ever after. There is an edge of negativity to the film that leaves the viewer with a feeling of helplessness. You can't stop the disasters that are about to happen and, so it seem, neither can the players. I could never get my arms around the main characters in "Love the Hard Way" though I cannot fault the actors in their efforts. Brody gives a solid, mannered performance using the props of his ever-present cigarette and musical Zippo to develop what Jack is. Ayanna is too squeaky clean when we first meet Claire but the actress comes out as she sinks into her underworld life after being rejected by Jack. She gives a perf that is like a train wreck - you're stomach churns as her life spirals down but you can't stop watching. John Seda puts a good spin on his sidekick character, Charlie. Pam Grier is hamstrung in her role as the two-dimensional detective Fox. Helmer Sehr garners good perfs from his actors but his direction and the story (script?) is stilted and uneven. The film looks low budget and any box office will be made from those interested in seeing Brody in his post "Pianist" role (though "Love the Hard Way" preceded Brody's participation in the Polanski film). I could never empathize with the lead characters in "Love the Hard Way" and this is my problem with the film.