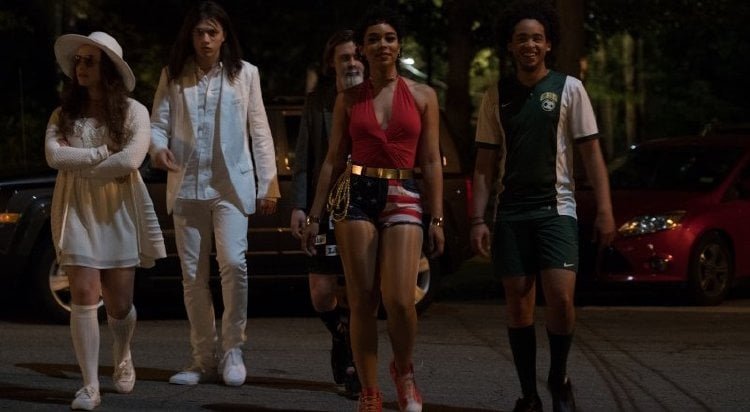 Simon Spier's (Nick Robinson, "Everything, Everything") father Jack (Josh Duhamel) was the high school quarterback who married the hot valedictorian Emily (Jennifer Garner) and created a beautiful family life. Simon even likes his little sister, aspiring chef Nora (Talitha Bateman, "Annabelle: Creation"). He's got a tight circle of friends, including BFF since forever, Leah (Katherine Langford, Netflix's '13 Reasons Why'). But Simon has a secret he hasn't told anyone, until he begins an anonymous correspondence with a fellow student that he's just dying to sign "Love, Simon."

This sweet high school rom-com follows the footsteps of many that have come before with one major exception - this is the first of its kind to feature a gay protagonist - yet anyone who's felt awkward exposing a truth about themselves will relate. Novelist Becky Albertalli and 'This Is Us' screenwriters Elizabeth Berger and Isaac Aptaker use the anonymous pen pal device from such films as "The Shop Around the Corner" and "You've Got Mail" as their obstacle and up the ante with a blackmail threat with all kinds of romantic fallout, but it is their finely tuned situations and sharp dialogue delivered by a thoroughly charming cast that makes this "Simon" something special. Simon starts his day sampling Nora's latest 'Top Chef' inspired breakfast experiment before picking up Leah, Nick (Jorge Lendeborg Jr., "Brigsby Bear") and their newest pal Abby (Alexandra Shipp, "X-Men: Apocalypse") and their a.m. iced coffee order. They're greeted by Creekwood High School's overly exuberant vice principal Mr. Worth (Tony Hale, HBO's 'Veep'), eat lunch together and rehearse Cabaret with comically exasperated drama teacher Ms. Albright (Natasha Rothwell, HBO's 'Insecure'). But everything changes when Leah calls Simon and tells him about the latest Creek Secrets blog post, an anonymous entry by a gay student using the moniker Blue describing life as the ups and downs of a Ferris Wheel. As Leah's wondering who he might be, Simon's creating the email handle Jacques to reach out. The next day, Simon looks everywhere for Blue clues, but when he hastily leaves a library PC, Martin (Logan Miller, "Before I Fall") discovers his open Jacques account. Pulling Simon aside, Martin, an overly confident social oddity, asks Simon to help him woo Abby lest he tell everyone Simon's secret. Simon reluctantly agrees, but in trying to maintain his status quo, he upsets everyone else's, his friends' secret passions all thwarted in his quest to find his own. The film maintains its mystery to the end, the filmmakers suggesting we may know who Blue is, only to pull the rug out from under us at tale's end. "Love, Simon" exists, as too many of these films do, in upper middle class neighborhoods and everyone is so unrelentingly nice (even Martin is a sweetie, if a desperately demented one) it's a bit much to take at first, but then there is Ethan (Clark Moore), Creekwood's flamboyant 'out' teen who, although always surrounded by friends, is peppered with passing jibes (quickly twisted and returned), and Abby, the lone apartment dweller, who eventually reveals a painful past. We can see the longing in Leah's eyes even if Simon never recognizes it for what it is, instead pushing her towards Nick whose chemistry with Abby is there for all to see. And Simon's struggle with coming out, his fear of changing his 'perfect' world, is all too relatable for any teen on the verge of graduating high school. Director Greg Berlanti stages many wonderful moments. Martin makes two grand gestures to Abby, the first successful, the second distressingly - and publicly - not (he gets a third chance, but not with Abby and it's a beaut). The kids attend Bram's (Keiynan Lonsdale, "Insurgent") Halloween party in character-defining costumes, Simon and Leah as John and Yoko, Abby as Wonder Woman, Martin as a 'Freudian slip.' Simon makes a grand gesture of his own at the holiday carnival Ferris Wheel and it's a winner, the entire school cheering on the now outed teen's brave stance for love. The advance screening audience did too. Grade: