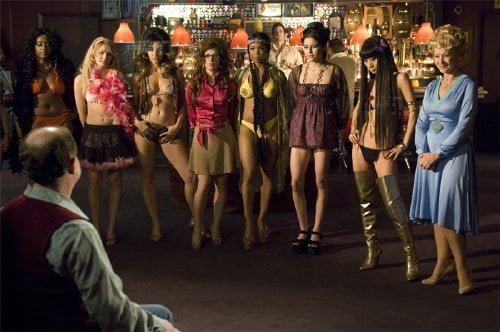 Grace and Charlie Botempo (Helen Mirren and Joe Pesci) are ground breaking entrepreneurs in the Biggest Little City in the World, Reno Nevada. They are the first to open a legalized brothel and business is booming. When Charlie, without consulting Grace, buys the contract of an Argentine heavyweight boxer, Armando Bruzo (Sergio Peris-Mencheta), their lives will change forever at the “Love Ranch.”

Shortly after ringing in the new year of 1976, brothel owner Grace Botempo (Helen Mirren, "The Queen") quickly learns two things - that she's dying of cancer and that her husband Charlie (Joe Pesci, "Goodfellas") has purchased the contract of Argentinean heavyweight boxer Armando Bruza (Sergio Peris-Mencheta, "Toi et Moi") that she's to be his manager and that the hunky charmer will be training on site at "Love Ranch." I'm sure there are lots of fascinating stories to be told about Joe and Sally Conforte and their Mustang Ranch, the first legal brothel in the U.s., but Sally's rumored affair with Argentinean boxer Oscar Bonavena isn't one of them. What was director Taylor Hackford ("An Officer and a Gentleman," "Ray"), husband of star Mirren, thinking? This is a misguided effort, written by Mark Jacobson ("American Gangster") with fictional emphasis in all the wrong places. We already know Mirren is one sexy sixtysomething, so there's no need to give her a May/December romance to prove it. Furthermore, Jacobson seems intent on contradicting his own characters. Grace runs the day to day operation of Love Ranch and is one tough cookie, but the minute she damages her husband's ego, she turns all conciliatory, stroking his ego. Bruza's a washed up boxer intent on using the Bontempos to weasel his way into their lucrative business, until Grace recognizes him for what he is so he can turn all sincere and tragic and romantic. We learn little of the workings of the bordello, but the twenty-five girls Grace manages are played by such relatively high profile actresses as Gina Gershon ("Showgirls") (Grace's confidente), Scout Taylor-Compton (2009's "Halloween II") (Charlie's latest favorite), Taryn Manning ("Hustle & Flow"), (Charlie's earlier favorite) and Ling Bai ("Crank: High Voltage"), sporting lots of eyeliner and little dialogue. We see Charlie acting badly, roughing up those who would stand in his way, and Grace acting fairly, pushing a hooker with kids into a real job, but there's little interaction between the two until the film's end. Instead, there's lots of Grace and Bruza, first circling each other, then acting like two lovesick teenagers. The actors do what they can with the lots they've been dealt and Spanish star Peris-Mencheta could cross over. Mirren's always interesting and she's believable as the brothel mom until she goes all starry eyed. Production values are OK, with occasional scenes feeling like they've been lit for television rather than the big screen. Production design and costume feel authentic. But "Love Ranch just doesn't work. You can't take such sleazy surroundings and try to make it the setting of true love, especially after turning an opportunist into a tortured lover. A documentary on the Confortes and Mustang Ranch would be much more welcome.

Another “based on true events” story, this time directed by Taylor Hackford from a script by Mark Jacobson, “Love Ranch” mirrors the real life story of Joe and Sally Conforte and their Mustang Ranch, the first legalized brothel in modern America. The film, in an unusual bit of casting, pairs the always fine Helen Mirren and two-note (funny or menacing) Joe Pesci. Here, the pairing mostly works but “Love Ranch” centers on Grace, her troubles and passions, as she copes, silently, with her cancer (Charlie always talks over her when she tries to tell him), and falling in love with Armando. Pesci’s Charlie is her foil, both funny and menacing, and the reason for most of her problems, which, of course include his frequent peccadilloes with their girls. Mirren is such an actor of passion that her relationship with Armando is touching and believable. Sergio Peris-Mencheta is extremely likable as Bruzo, a fighter that Charlie hopes to match up with Mohammed Ali. Armando’s introduction brings a house-of-cards tone to “Love Ranch” that makes the results predictable and violent, but with a pleasant twist in its prologue. Hackford and company capture the frigid desolation of wintertime Nevada with its clear skies and cold sunlight. Period attention to early 1970’s is well handled and the production is solid. The story is lopsided in Helen Mirren’s favor and this creates an unbalance.