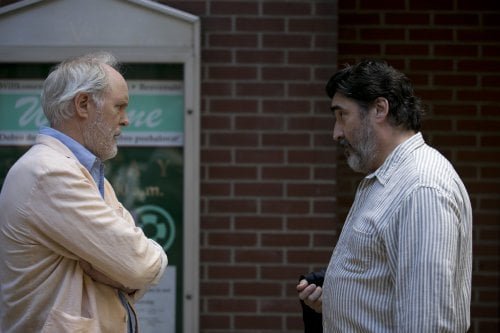 Ben (John Lithgow) and George (Alfred Molina) have a joyous wedding celebration after 39 years together but are almost immediately forced apart when George is fired from his job as a Catholic school teacher and they can no longer afford their apartment in "Love Is Strange."

Cowriter (with Mauricio Zacharias)/director Ira Sachs leaps a generation from his last film about a gay couple ("Keep the Lights On") to look at a senior couple who find that today's more accepting views on homosexuality and gay marriage doesn't mean there isn't still plenty of heartbreak in the pursuit of happiness. Lithgow and especially Molina create a lived-in relationship shared by two very different people, both actors very moving in their separate journeys back into one another's arms. But Sachs's film also ventures into the lives of those who offer them temporary shelter and the most important of these, that of Ben's teenaged grandnephew Joey (Charlie Tahan, "Life of Crime"), is confusingly told. 71 year old Ben is a retired working artist still awaiting discovery. George is a choir instructor beloved by all at the school he's worked at for over a decade. As they prepare to leave for their wedding their differing natures and personal styles are evident, one a bit dithery in striped pastels and bow tie, the other more organized, black suited. Surrounded by family and friends as they make their vows and later, celebrating in their apartment, an outpouring of love can be felt. Ben's nephew's wife Kate (Marisa Tomei) makes a toast in which she tells how she realized her husband Elliot's (Darren Burrows, "Forty Shades of Blue") introduction to them was his way of proposing, Ben and George's relationship an example for anyone. George is stunned when returning to work he's informed by Father Raymond (John Cullum, "Kill Your Darlings") that his marriage has cost him his job even though the school, students and parents all knew about his long standing partner, citing a standards document he signed years ago. Apparently a picture on Facebook made its way to some hard line Bishop. With his income gone, Ben and George can no longer afford their beloved coop. As no one has room for both men, Ben moves in with nephew Elliott to share a bunk bed with Elliot's son while George stays with their gay cop buddies Ted (Cheyenne Jackson, "Behind the Candelabra") and Roberto (Manny Perez, "Pride and Glory") who live a floor below. Gentle Ben finds himself an object of annoyance as he chatters away to Kate, who's trying to work at home, and with Joey, who's having a hard time finding study space with his Russian school friend Vlad (Eric Tabach). Ben finds sanctuary painting on the building's roof, but when he uses Vlad as a model, Joey blows up. There are intimations that maybe Joey's gay, then some convoluted twist about him having stolen French language classics with Vlad, but Ben's one thoughtful nighttime question apparently changes the boy's life. While Sachs easily articulates the difficulty of maintaining private space in a familial living situation, Kate's dramatic flip flop and Joey's vague torments are a distraction (other hinted at extended family discord is played in more minor keys to greater effect). George has the opposite problem in that Ted and Roberto's small place is party central, he's not one for crowds and their couch is his bed. In the film's most moving scene, George, overwhelmed, arrives in the pouring rain and collapses into Ben's bewildered embrace (Elliott and Kate, who've been creating their own privacy bubbles, recognize their guest's need for one). And of course the film's biggest irony is that the men who've waited 39 years to marry have been forced to retreat back into dating. While Sachs's handling of Joey's teenaged angst is awkward, his forward jump conclusion in which the young man recognizes his attachment to Ben is a lovely bit of work, right down to the scene's art direction, prominently featuring Ben's painting of Elliott and son. The Chopin piano score, both fore and backgrounded, lends just the right tone of classical melancholy. In addition to its central theme, the search for new living space pairs "Love Is Strange" with Nicole Holofcener's 2009 "Please Give" as essays on the convolutions of Manhattan real estate.