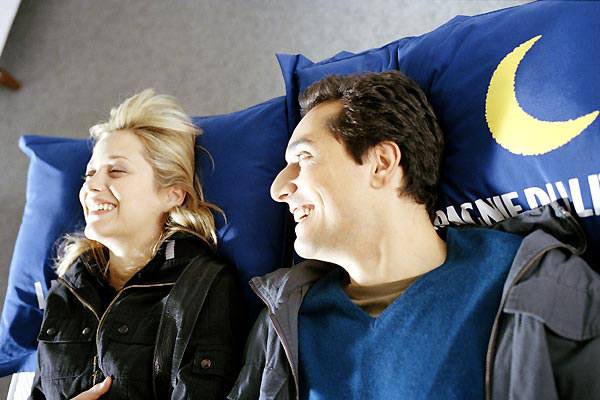 Yann Kerbec’s traumatic birth took place on an airliner in the skies over the Pacific Ocean. His mother died during the birth and Yann (Vincent Elbaz) has not flown since. Not once, not even with the free fly-for-life offer from the airline. Now, he is the simulator trainer for the pilots of an large airline company but still refuses to fly. That is, until he meets Alice and learns that “Love Is In the Air.”

This light, romantic comedy has the right stuff as 20-ish Yann falls for Charlotte (Elsa Kikoine). The romance is short-lived, though, when she tells him that she is leaving for Australia for a year. Though he is deathly afraid of flying, the aviophobe vows that he will fly halfway around the world to visit her. His heart may be in the right place, however, his head is not and he leaves the plane just before take off. He goes home where his best friend, Ludo (Gilles Lellouche), a true stoner, asks to stay for “just a couple of days.” Ten years later, Yann is the head pilot trainer for Sabina Airlines, but only in a flight simulator firmly attached to the ground, and Ludo is still sleeping on his couch. Charlotte is apparently forgotten when Yann meets Alice (Marion Cotillard). Things seem to have found their level for Yann and his time with Alice is wonderful - until he hears that Charlotte, single, has returned to Paris. Life gets sticky for the hapless romantic when he lets his feelings for his former love, old and no longer real feelings, intrude in his relationship with Alice. The love triangle pairs with Yann’s career and we join him at work where he evaluates Sabina pilots. The most amusing has Castelot (Didier Bezace) repeatedly tested by the instructor – and not doing too well. Then you find out he is a working airline captain. Fear not, director/writer Remi Bezancon ties this side plot together with humor and a tense but happy conclusion. The shrift given this well-developed and amusing bit shows the deftness of the scribe in telling an intricate story. Love Is In the Air” is a frothy little comedy populated with likable characters and a well structured, entertaining story. It will not win any Academy Awards but should easily draw international audiences with its humor, romance and one of the best stoner buddies who would easily fit in with those goofy, stoned-out roommates in “Knocked Up.” Love Is In the Air” is a pleasant surprise as a well-conceived, well-crafted, well-acted romantic comedy that has lots of both.