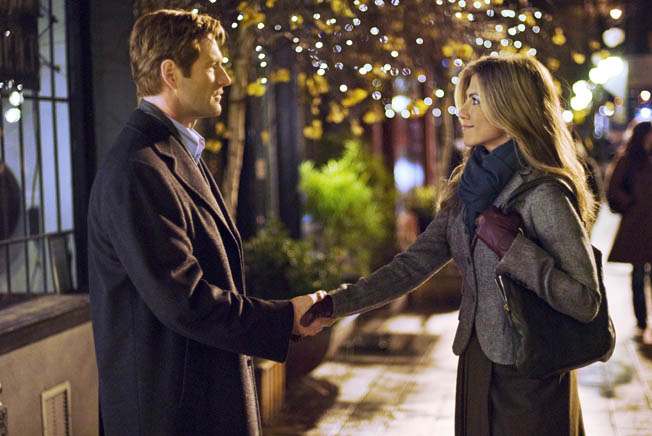 Eloise Chandler (Jennifer Aniston, "Marley & Me") has decided that the only romance in her life for the time being will be her floral business. Dr. Burke Ryan (Aaron Eckhart, "Thank You for Smoking," "The Dark Knight") is a self-help author on the verge of a multi-media deal who cannot take his own advice. When Eloise and Burke cross paths at the hotel where he is giving a seminar, will they be able to admit that sometimes you must ditch your plans when "Love Happens"?

This may be far from the worst movie Hollywood has released this year, but it certainly illustrates everything that's wrong with the Hollywood machine. A prefab package in every sense, "Love Happens" is a coma-inducing collection of unimaginative sermons, tasteless symbolism and one of the most crass uses of product placement to come down the pike in some time. Aaron Eckhart tries to do some heavy lifting here, but he has no chemistry with Aniston, whose crinkly faced comic and stoic stare reactions have worn mighty thin. Oh, and a tropical bird is let loose in woods outside of cool, rainy Seattle as a ‘healing exercise.’ 'When life gives us lemons,' we hear in voice over narration from Burke, quoting his own book, if not his own words. Here is a rising self-help guru who uses this sorry cliche to describe the death of a loved one. In real life, he'd be pelted with them, but in "Love Happens" those self-same lemons appear symbolically in a hotel oil painting and later again in his father-in-law's (Martin Sheen, TV's "The West Wing") kitchen, piled on a woodblock counter as if a food stylist had just run out the back door. And why do they keep showing up? Well to remind us of Burke’s deceased wife! Or something. Who knew the writers of the sappy "Dragonfly" (Mike Thompson and Brandon Camp, making his directorial debut) could rehash their own material and make it more tasteless. The self-help guru is also one of those occupations which show up at a proportionally high rate in movies (Terrance Stamp in “Yes Man,” Tom Cruise in “Magnolia,” Greg Kinnear in “Little Miss Sunshine…”), not unlike serial killers. Burke puts on his fakey face in the hallway as his agent, Lane (Dan Fogler, "Balls of Fury," "Taking Woodstock") introduces him to a hotel conference room, then bounds in to assure his paid audience that he will help them through their grief. But Burke’s confidence is a lie as he has yet to get over the death of his wife in a car accident three years prior. Just call him “Griefless in Seattle.” Meanwhile Eloise, who has just caught her musician boyfriend cheating yet again, is hiding behind her flowers (florists being another one of those occupations which bloom frequently in romcoms) and doing wacky things like writing unusual words on the wall behind hotel paintings. Burke is intrigued, but rusty. He finally connects with Eloise when she realizes his pain. One of the very best character actors in the business, John Carroll Lynch ("Zodiac," "Gran Torino"), plays Walter, a grief-paralyzed parent who will require more work from Burke than the rest. The former contractor who has lost his business since the death of his young son is taken to Home Depot shopping excursion in order to 'move on.’ This scene also becomes one of the film’s many montages (like the Seattle tourism one!), ending with Walter and his shopping cart leading Burke’s entire group through the store. Even Lynch can't conceal the deal-making behind this sorry story development. At least Qwest Communications provides the means for a cutesy date, but even that turns into the typical plug-new-indie band moment and the band, Rogue Wave, couldn't be more forgettable and generic. Technically, the film looks nice and takes advantage of inner and suburban Seattle locations. It is also of interest to watch Fogler stepping away from the frat boy roles of “Balls of Fury” and aspire to more of an Oliver Platt-like career – he’s pretty good in this. Rocky the Cockatoo is a crowd pleaser as well. But be forewarned – the words the movie leaves us with? ‘When one thing ends, another begins.’ Thank God – hopefully a different movie.