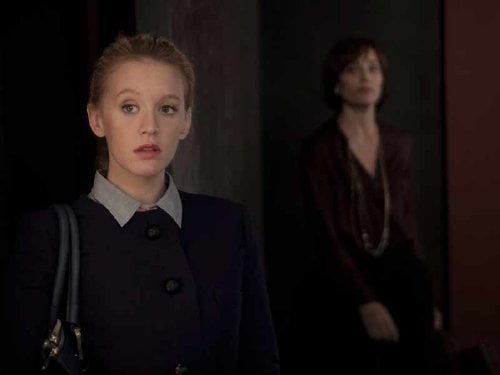 Isabelle Guérin (Ludivine Sagnier, "Swimming Pool," "The Devil's Double") is totally committed to her work. Not only is she extremely good at what she does, she's just about in love with her boss, Christine (Kristin Scott Thomas, "Sarah's Key," jumping back and forth between English and French language productions). But when Isabelle's own assistant, Daniel (Guillaume Marquet), points out that Christine gives Isabelle no credit for her ideas and hard work, she becomes so focused on their power games she plans and executes a shocking "Love Crime."

Cowriter (with Nathalie Carter)/director Alain Corneau ("Tous les matins du monde") once again looks at female friendship between mentor and protege in the workplace, where power struggles become all, but unlike "Fear and Trembling," which was an East/West film with fantasy elements, "Love Crime" is a cross between a Chabrolian murder mystery and "All About Eve." Its layers of complex psychological ambiguity harken back to the earlier film in its first half, but the second half makes a distinct shift in tone and style, rounding back to a capper that closes the loop. We're introduced to the two women in Christine's luxurious home as Isabelle works to prep her for an important meeting in Cairo. When Isabelle admires Christine's scarf, it immediately becomes a gift (and a symbol throughout the rest of the film). While Christine stretches out on a sofa, her lover Philippe (Patrick Mille) comes to give her a foot rub. Isabelle crisply takes her leave with her laptop, returning to her stark, orderly home. She has an idea that she hopes to 'surprise' Christine with, but to her astonishment, after doubts about Christine's loyalties, she's offered the trip in her stead. And she's to go with Philippe. She's triumphant in Cairo and seduced by her boss's lover, something which seems preordained. Is he a substitute for Christine herself? On the way to a reception, Christine suggests Isabelle try her lipstick, a type of blood brother bonding. But once there, Isabelle once again has the rug pulled out from beneath her about Christine's motivations. Then a panicked Philippe tells her they can no longer see each other. Isabelle's reaction is shocking, the film's midpoint sharply cut in two. Her behavior following is even more bizarre - is she trying to indict herself? Then we begin to see just how Machiavellian her intelligence is, her understanding of human behavior revealed in flash backs. Corneau, his production designer and cinematographer have styled his film to a fault. At her most stressed, Isabelle is presented against blank slates - the shell pink of a bathroom, the large windows of an office rendering it almost not there. Where Isabelle is cool, Christine is warm, but is she? Scott Thomas makes her a bit of a cipher, a power player who likes to pull strings, but one who also shows emotional investment in those she plays. Sagnier is equally good, insecurities where there should be none, a keen intellect vying with a need for love. And yet the film should have been more cohesive. The second half, while a tantalizing bit of plotting, has had Christine's presence all but excised when she should be pervasive. The international business world in which all this plays out is too make believe an environment, a lot of meaningless blather about local subcontractors and market research from America. We don't know what business these people are in. Still, "Love Crime" is compelling from the get go, a twisty ride with a conflicted heroine of fascinating, if sometimes perplexing, psyche.