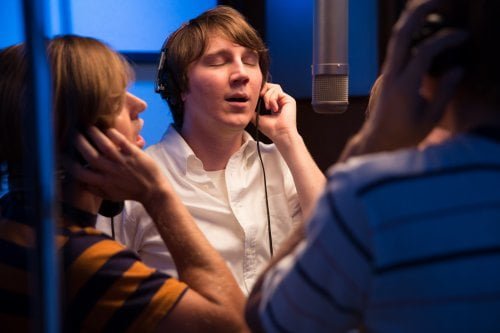 Brian Wilson was an icon of rock music during the 60s and 70s and an innovator not just writing music but designing it in his own style. But Wilson was also troubled by his own inner demons, demons that would plague him throughout his life. His story is told and his music is played in the biopic, “Love & Mercy.”

Brian Wilson (Paul Dano, "Prisoners"), the cofounder singer/songwriter of The Beach Boys, is a musical genius, his production of Pet Sounds considered one of the greatest pop albums of all times. But few people know of the mental breakdown that kept him in his bed for years or his decade long treatment under Dr. Eugene Landy (Paul Giamatti, "San Andreas") which evolved into a virtual hostage situation. During this time, he (John Cusack) went to buy a Cadillac and met saleswoman Melinda Ledbetter (Elizabeth Banks, "Pitch Perfect 2"), the woman who finally gave him what he had always been looking for, "Love & Mercy." A montage of the sounds and images that equated The Beach Boys with California and surfing segues into a scene of a strange man sitting barefoot in showroom car, his bodyguards and psychotherapist hovering in the background. Right off the bat, producer/director Bill Pohlad signals that this will be no standard biopic. Using two actors to portray an artist at his creative peak (Dano) and the wreckage that was left behind (Cusack) was an inspired idea, and the script by Oren Moverman ("The Messenger," "Rampart") and Michael Alan Lerner shuttles between these two eras, the 60's foreshadowing the ruinous 80's, which, in turn, informs the former's artistic stimuli. A cautious but intrigued Melinda begins to suss out her potential customer, who begins to talk of his brother's death - three years prior. As he's herded out of her showroom, Melinda's told just who he is, and that she's made her sale. She agrees to a date, only to find herself one of a group at a Moody Blues concert, Landy demanding to know every word exchanged between herself and Brian. Later, he meets with her privately, laying down his laws. Melinda immediately senses something very wrong and it's not with Brian. As she gets to know the gentle but troubled soul, we slip back in time to see the pivotal moment when Brian decided he no longer wanted to tour (an extreme anxiety attack on a plane), instead wanting to devote himself to the studio. Working at EastWest Studios with the Wrecking Crew, Brian's innovative use of non-traditional musical instruments (bobby pins and barking dogs) and off beat harmonies (two bass lines in different chords) win the highest respect from the experienced studio musicians, but the resultant album has disappointing sales. Abusive, alcoholic dad Murry Wilson (Bill Camp, "Aloha") dismisses his son's greatest work and cousin Mike Love (Jake Abel, "Good Kill") just wants to get back to the already proven Beach Boys sound. But Brian can't go back to 'summer, sun and fun' stating that 'surfers don't like our music anyway.' Having begun to experiment with drugs, Brian climbs into his literal living room sandbox with its grand piano and disappears into his own head. Pohlad coils the two story strands into a crescendo, accompanied by composer Atticus Ross's ("The Social Network") interior aural headscapes. As the Beach Boys lose their relevence leaving the 60's, Brian fights his way back in the 80's and as he does so, Pohlad reaches farther back, shedding light on Wilson's formative years, his 90% hearing loss in one year attributed to a wallop from dear old dad. Dano, who gained 30 pounds for the role, is brilliant conveying the joy reproducing the music in his head brings to his fragile being. He bounces about the studio like a puppy, accepting praise from a musician as if getting a pat on the head. But the real world and his own family elude him, as evidenced by a dinner party (attended by an unnamed Charlie Manson) where the clink of cutlery turns into a cacophonous din. Cusack shows more actorly tics in his performance, yet he embodies Wilson's frail, loving spirit. When he encourages Melinda to swim for the shore off a boat piloted by Landy's watchdog son, one wants to cheer and the tender post lovemaking scene which follows is the perfect illustration of just what Melinda set out to save. Banks is fine as well, a toughened 80's glamazon (costume design by Danny Glicker) whose fight for love is fueled by maternal instincts. Giamatti's psychotropic-dispensing Svengali is the successor to Brian's paternal abuser, a two-faced con man calming tough love qualms with cooing assurances. Cinematographer Robert D. Yeoman ("The Grand Budapest Hotel") working in 16 and 35mm and production designer Keith P. Cunningham ("Enough Said") achieve separate looks, the 60s all sunny grains and candy colors, the 80s cooler whites and blues. The Wilson/Ledbetter approved project is also chockabloc with Beach Boys originals, Dano doing his own singing while composing. If there's a problem with "Love & Mercy" (the title song is performed by the real Brian Wilson during closing credits), it's that the rest of the band, especially brothers Dennis (Kenny Wormald, 2011's "Footloose") and Carl (Brett Davern), are given exceedingly shallow portraits with no indication how they felt about their elder sibling. "Love & Mercy" is an insightful look at the fine line between art and madness. It will be an eye-opener for those who don't know what was behind all those Good Vibrations. Grade:

Producer-turned-director Bill Pohlad tells the story of the life of the music legend in two parts. The film begins in the early 80s with a haggard Brian Wilson (John Cusack) trying to buy a Cadillac from pretty model-turned-saleswoman Melinda Ledbetter (Elizabeth Banks). The sale is interrupted by Dr. Eugene Gandy (Paul Giamatti, chewing scenery), Brian’s psychiatrist and watchdog, who warns Melinda that his ward is in a delicate and vulnerable state of mind. He permits her to date Brian but with very strict rules. The film follows Brian’s life during these turbulent days. Flashback 20 years to 60s. The Beach Boys fly home from a concert tour and Brian (Paul Dano) suffers from an anxiety attack in the extreme. The experience causes Wilson to decide that he does not want to tour with the band anymore. Instead, he wants to work in the study and develop his ideas to innovate the music for the Beach Boys. The creative process – shown from Brian’s mind as he designs the sounds he wants to include in his music and then implements it with a plethora of musicians and instruments – is the keynote to “Love & Music.” As the story jumps back and forth between its referenced decades, the other side of Brian Wilson unfolds: his extreme bouts with mental illness, drug and alcohol abuse and addiction are shown vividly and with a punch. Credit to both Dano and Cusack in showing the ravages of a lifestyle that stay with the troubled Wilson for a lifetime. The flash forwards to Brian’s romance with Melinda offer hope for the man who is under the “care” of a physician. Cusack and Banks have nice chemistry and you root for them, especially when she learns of Landy’s shady deals and control over Wilson. Giamatti should have been given a handlebar moustache as he telegraphs his not-so-noble intentions early on. Paul Dano is simply terrific depicting younger Wilson and all his foibles. Biopics are a tough thing to get right, but when they do, it is a real treat. “Love & Music” will attract Beach Boys fans for sure, but director Pohlad has created a work that will appeal to a much broader audience – like, anyone who loves music.