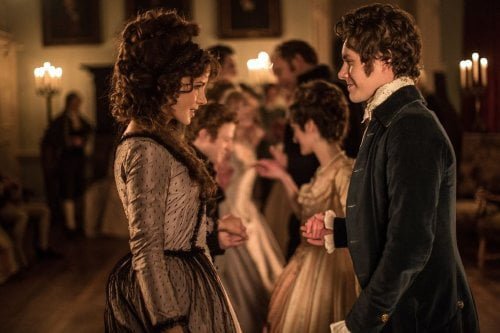 When recently widowed Lady Susan Vernon (Kate Beckinsale, "The Last Days of Disco"), who has been getting by with Jane Austen-era couch surfing, must leave the Manwaring home of Langford, she absconds to Churchill, the home of sister-in-law Catherine Vernon (Emma Greenwell, "Pride and Prejudice and Zombies") to let scandalous gossip die down. Lady Susan is a known flirt and Catherine is horrified when she sets her cap for her brother Reginald DeCourcy (Xavier Samuel, "Twilight Saga: Eclipse") in "Love & Friendship."

Writer/director Whit Stillman ("The Last Days of Disco," "Damsels in Distress") continues his cinema of social mores, but instead of his contemporary settings, this time he tackles a little known Jane Austen novella. 'Lady Susan' was Austen's first attempt at writing and was not published until after her death. It is unusual in that it features an unsympathetic heroine who, while not getting what she wants, achieves something that is perhaps even better. This is not your usual Austen adaptation, Stillman instilling it with an American forthrightness. While Catherine is the first to admit to Susan's beauty, intelligence and charm, she also recognizes neglect of her late husband and encouragement of other men. Reginald, who has also heard of the lady's notoriety, is anxious to meet her and quickly comes to the conclusion that she has been misjudged. But as Lady Susan plots her conquest with American confidante Alicia Johnson (Chloë Sevigny, "The Last Days of Disco"), her plans are unsettled when word arrives that her daughter Frederica (Morfydd Clark, "Pride and Prejudice and Zombies") has run away from boarding school and will not be welcomed back (we may assume due to unpaid bills). The miserable young woman arrives at Churchill quickly followed by the man who mother has chosen as her intended, the embarrassingly silly but very rich Sir James Martin (Tom Bennett, HBO's 'Family Tree'). Frederica turns to Reginald in her dismay, but Lady Susan is adept at turning favorable opinion. Then Alicia shares the delicious news that Lord Manwaring (Lochlainn O Mearáinn) is in London. Lady Susan's juggling act becomes built on a house of cards. Beckinsale displays all the attributes her sister-in-law's character lays out along with a strong sense of Lady Susan's confidence. As Catherine astutely notes, 'Only clever tradesmen can see through her manipulations,' money being the great equalizer. Austen's feminist themes of sexual politics amidst the monied classes finds the women - here Susan, Catherine, Alicia, Frederica and Catherine's mother, Lady DeCourcy (Jemma Redgrave, "Howard's End") - the scheming protagonists, only Lady Lucy Manwaring (Jenn Murray, "Brooklyn"), the former ward of Alicia's husband Mr. Johnson (Stephen Fry), unable to secure a male champion to further her cause. Samuel is appealing as the object of contention, but it is Bennett who surprises, deftly combining flinch-inducing social awkwardness with such a sunny, kind disposition we fear for his happiness. He's like 'War and Peace's' Pierre minus the intellect. Catherine's husband Charles Vernon (Justin Edwards, "Paddington") has good will towards all while her father Sir Reginald DeCourcy (James Fleet, "Sense & Sensibility") is more concerned about whether Frederica's singing talent deems her a Kentish nightingale or Surrey songbird. Whitman's production is what one would expect from the material with its lush locations and costumes while the adaptation is bold in its treatment of more provocative elements. "Love & Friendship" may be the oddest of Austens with its open ideas about sex and a 'happy' ending that leaves likeable characters holding baggage thrust upon them. Grade: