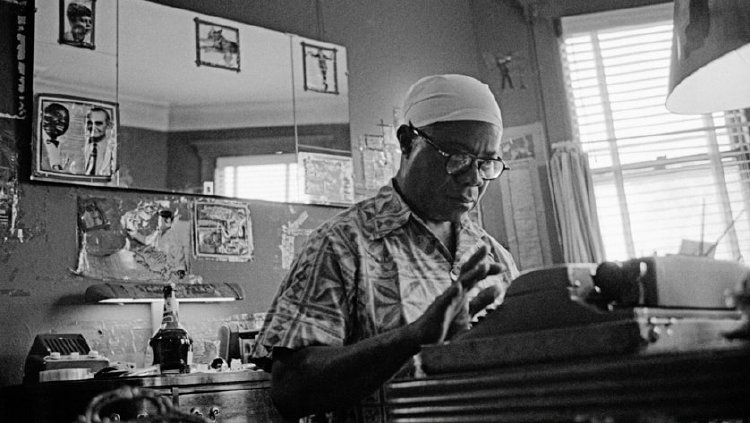 How would it end? Ain't got a friend
My only sin is in my skin
What did I do to be so black and blue?  ‘Black and Blue’ Fats Waller

His trumpet playing was considered the best jazz has to offer.  He invented scat and changed the way people sang.  He was the first black star to have his name above a movie title.  He was beloved around the globe, but dealt with racism at home that wouldn’t allow him to sit at a table in a club he was headlining.  Yet many of his own race considered the man whose eyes bugged out and whose wide, toothy smile was compared to piano keys to be an Uncle Tom.  The man’s own words in recordings from his archive define a complex life in “Louis Armstrong’s Black & Blues.”

With access to Armstrong’s voluminous archives comprised of audio tapes, clippings and letters, director Sacha Jenkins ("Bitchin': The Sound and Fury of Rick James") sketches a picture of a man who was far more complicated than his public image.  The man who rarely offered his opinions in public had a lot more to say in private, much of it recorded in audio diaries laced with salty dialogue one wouldn’t expect from Satchmo (his letters are read by Nas).

The film traces Armstrong’s life from his poor roots in New Orleans, where his mother made delicious dinners with fifteen cents worth of fish heads and where he landed in an orphanage for firing a gun on July 4th.  This is where he learned to play the trumpet and soon he was playing professionally with King Davis, who, recognizing Armstrong was better than him, kept him in the back.  It was Louis’s first wife, Lil Hardin, who gave him a much needed nudge by telling him she wouldn’t marry a second trumpet player.

The man’s musical genius is analyzed by folks like Bobby Hackett, Wynston Marsalis and Miles Davis.  Leonard Bernstein pops up to define the quarter tone that was Armstrong’s signature, informing us that it came from Africa.  There are of course, many examples of the man’s music, his playing of ‘The Star Spangled Banner’ a point of pride well before Hendrix graced the stage at Woodstock (James Baldwin is quoted as saying hearing Armstrong play it was the first time he ever liked the song).

When Armstrong believes he’s being contractually cheated, he changes management, exposing gangster ties.  We learn he swore by Swiss Kriss laxative while on the road and enjoyed smoking weed.  We see the gregarious Armstrong on talk shows wtih Johnny Carson, Steve Allen, Dick Cavett and David Frost, but while he was often criticized for not speaking up more strongly during the Civil Rights era, he was the first black entertainer to crack the ‘white hotel code.’  His relationship with white jazz trombonist and singer Jack Teagarden was considered a model of race relations and clips of the two sharing a mike make them seem like brothers.

The film, which animates pieces of Armstrong’s scrapbooks like kidnapping notes, comes to a climax with his dream of being King of the Zulus in his home town’s Mardi Gras parade in 1949 and the recollections of his fourth wife, Lucille (his second and third are never mentioned).  We see his modest brick home in Queens where his interactions with three generations in his neighborhood were some of his life’s great joys.  And then one of Armstrong’s early detractors, Ossie Davis, explains how his experience with the man during the filming of 1966’s “A Man Called Adam” made him completely reevaluate his earlier stance.  “Louis Armstrong’s Black & Blues” may leave us with one too many questions, but we also learn more than we thought about the man disappointed by his own country time and time again who could still sing ‘It’s a Wonderful World.’

Jazz trumpeter Louis “Satchmo” Armstrong is one of the best known American musicians in the world, even 50 years after his death. Musician and jazz historian Sacha Jenkins accesses the music icon’s vast personal and professional documents, music and film resources to tell the life story, in detail, of “Louis Armstrong’s Black and Blues.”

Sacha Jenkins’s beautifully crafted biodoc masterfully tells the complete, as far as I can tell, story of the life, times, music and influence Louis brought us for over 50 years. We follow his copious music career, which also includes an extensive Hollywood filmography, and hear the many praises from the people he crossed paths with and influenced greatly. The list of jazz greats singing Satchmo’s praises are many and diverse.

As I watch this well crafted homage (though light on his personal life) to a great American music icon, I was impressed by the sheer scope of his work, the influence he had on music as the “father of modern jazz” and his role as American ambassador to the world. One side note pointedly made is the story of Louis receiving the key to the city of New Orleans, but that key did not open many doors for the African-American music phenomenon.

Apple TV+ releases "Louis Armstrong’s Black & Blues" in select theaters and on its streaming service on 10/28/22.