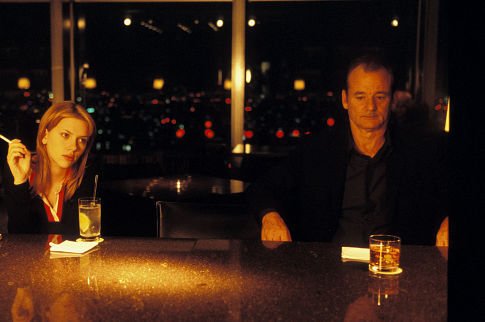 Bob Harris (Bill Murray) is a movie star making easy money for a Japanese whiskey commercial. Charlotte (Scarlett Johansson, "Eight Legged Freaks") is alone in Tokyo, a grass widow to her workaholic photographer husband (Giovanni Ribisi, "Heaven"). Late night insomnia in a strange landscape causes these two ships to pass in the night, forming a strange but beautiful bond that will never be "Lost in Translation."

Writer/director Sofia Coppola has crafted a mood poem about isolation in a strange environment and the temporary relationships that linger in memory that can be born there. Bill Murray puts a wry twist on his "Rushmore" persona to make Bob Harris an alienated middle aged crisis. Scarlett Johansson is his opposite, a just forming personality full of intelligence and curiosity, but unsure of her direction in life and a new marriage. Bob and Charlotte fully understand each other from their differing perspectives and a nonsexual romance blooms between the two. Coppola based her original screenplay on her own experiences, including stays at the Park Hyatt Tokyo prominently featured in the film and evenings out with local buddy Charlie Brown (Sofia's real friend Fumihiro Hayashi), a fashion magazine owner. Bob wants to get out of Tokyo as soon as he arrives. Lines of Japanese hotel workers and Suntori executives attend to his needs - when he can make them understood. He is a true fish out of water, his experience made more surreal by the lack of sleep compounded by faxes which arrive at 4:20 a.m. During his Suntori whiskey commercial shoot, the director (Yutaka Tadokoro) rambles strings of instructions which are translated to Harris as 'look at camera,' then makes suggestions such as 'Lat Pack' and '007' which Harris reacts to sardonically. The hilarity escalates when Bob opens his hotel door to be greeted by a 'premium fantasy' (Nao Asuka) sent by Suntori who commands him to 'Lip my stockings!' Bob's twenty year marriage is represented by abbreviated phone calls to consult over carpet samples his wife has Fedexed to his hotel room and a hesitant 'I love you' spoken to a dial tone. Meanwhile Charlotte is the picture of calm contemplation amidst her husband John's hectic comings and goings. Her inquisitive nature is exemplified when she wanders into a flower arranging class in the hotel, appreciating the beauty of the Japanese art. John is greeted rapturously by a young starlet Kelly (Anna Faris, "Scary Movie") and the division between his circles and his wife's is sorely evident. Wanting to get away from the shallow chattering of Kelly in the Hyatt's cocktail lounge, Charlotte approaches Bob. The two continue to run into each other with the awkwardness of those who have no history, but when John leaves Tokyo and Charlotte for several days, she briefly cries over the strangeness of her relationship, then takes the opportunity to invite Bob to go out with her local friends. "Lost in Translation" captures that bittersweet feeling of lonely anonymity one can experience in the midst of a friendly crowd. Coppola paces her film with long stretches where nothing seems to be happening, yet all the while she's building a strong mood which floats the comedy and quiet romance. Cinematographer Lance Acord ("Buffalo '66") used high speed film and no artificial lighting which casts the film in a a shadowy, twilight dream state. He finds that peculiar light so endemic to hotel rooms, where dust particles always punctuate the sunlight to create an interior gloom, as well as the crisp gray of a city freshened by a rainshower. Sound ranges from the staccato of tens of arcade machines being played to the vacuum of the carpeted hallway Bob finds himself alone in after shutting Charlotte's door. Music producer Brian Reitzell of My Bloody Valentine ("The Virgin Suicides") is particularly adept at matching characters to their karaoke selections. Murray is moving with two very different performances - Elvis Costello's "(What’s So Funny ‘Bout) Peace, Love And Understanding" has a hint of his old SNL lounge lizard while his flat arrangement of Roxy Music's "More Than This" bleeds melancholy. Anna Faris gamely massacres “Nobody Does It Better” in the cocktail lounge after house band Sausolito's singer (Catherine Lambert) takes a break from overdramatizing standards like "Scarborough Fair." "Lost in Translation" epitomizes the cultural clash of East and West, but the May/September romance of the outsiders at its core is clearly spoken and Coppola leaves us with one of the most romantic partings in movie memory.

Bob Harris (Bill Murray) is a formerly famous movie star who is now relegated to endorsing the Japanese whiskey, Suntori. He is in Japan to make TV commercials and photo shoots for the product and he is suffering from a severe, jet lag-induced case of insomnia. Charlotte (Scarlett Johansson) is a young woman tagging along with her photographer husband on assignment in Tokyo. Both Bob and Charlotte spend their sleepless evenings in the hotel’s bar and they eventually cross paths, forming a gentle and kind friendship in “Lost in Translation.” Sofia Coppola made a critically acclaimed debut with her teen angst film “Virgin Suicides.” For her sophomore effort, which she also wrote, she takes us to Japan and focuses on the two main characters, Bob and Charlotte. Bob, a cynical actor who is on the climb down the mountain of fame, is in the country earning $2 million for the commercial venture but should be, in his own mind, performing in a play somewhere. Instead, he spends all of the time in the hotel, not sleeping and drinking too much. Charlotte thought it would be a good idea to come along with her husband John (Giovanni Rabisi) on his photo assignment but he leaves her, most of the time, alone. Neither the actor nor the left-alone wife is sleeping and both spend their late eves in the bar. Of course, they meet, two lonely ships in the night, and they begin to spend their many waking hours in each other’s company. A warm, often funny friendship blooms. I was not a fan of “Virgin Suicides” but, with Bill Murray as the lead, I anticipated “Lost in Translation,” at least to see the wonderfully droll comic actor perform – I always believed that his terrific performance in “Rushmore” was one of that year’s most overlooked. Bob Harris is almost a blank cipher as we see him arrive after a long, sleepless flight from the States. An international celebrity, he is greeted by a phalanx of representatives from his sponsor and he is ushered to his room where he, in vain, tries to get some shuteye. Bob shuns the foreign culture before him and moves like an automaton from commercial set to photo shoot and onto a TV show with “the Johnny Carson of Japan.” His only concessions to taking in the foreign culture are to watch Japanese television to shoot a solo round of golf, at dawn, with Mt. Suribachi as the backdrop. Murray’s deadpan, bland acceptance of everything is perfectly suited to the character of Bob Harris. Charlotte awakens a spark of life in Bob as they use their mutual insomnia as a bond and she gets the grumpy actor to enjoy the foreign culture. Each is experiencing marital problems as Bob carries on his long-distance marriage with his increasingly uncaring wife who tells him, at one point, that his kids are getting used to his being away. Charlotte, on the other hand, feels abandoned by her workaholic photographer husband who leaves her alone for days at a time. These common bonds of loneliness and insomnia draw Bob and Charlotte together and her youthful vigor and wonder wear down his entrenched cynicism. The chemistry between these unlikely friends makes you want to see their relationship to continue when, in the end, they finally part. Sofia Coppola does a solid job with her minimalist cast and exotic backdrop of Japan. The sweet and chaste romance between the middle-aged actor and the photographer’s young wife has a natural feel and does not strain credibility. That these two very different people would draw together, as lonely strangers in a strange land, is believable. Murray, especially, makes this plausible and Johansson does her share to convince us, too. The inherent satire of these two fish out of water could have been explored more deftly in an experienced directors hands but Coppola does well enough immersing us into the Japanese culture. Although there is much Japanese spoken – in one scene, during the commercial shoot, the director rambles on in his native language on how he wants Bob to react to the camera with the translator boiling the lengthy instruction down to “be more intense” to the incredulous and tired Harris – there are no subtitles. You, the viewer, are as confused as to what is going on as the exhausted movie star. “Lost in Translation” is a slighter film than I expected but Bill Murray keeps it entertaining and does a fine job of emoting the exhaustion and frustration of being so far from home and helpless in what seems to be a failing marriage. Scarlett Johansson plays well off of the veteran comedy star and the resulting friendship does not feel false.