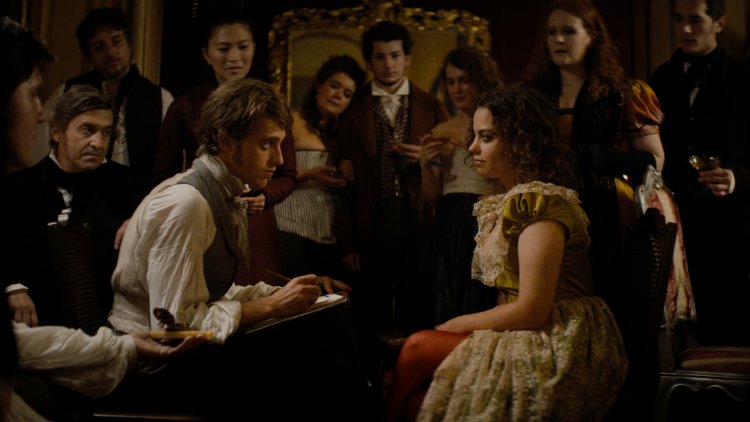 In the provincial town of Angoulême, Lucien Chardon (Benjamin Voisin, "Summer of '85") attracts the attention of its high society when, taken with a poem printed in the local gazette, Baroness Louise de Bargeton (Cécile de France, "Haute Tension")          invites him to read in her salon.  She becomes infatuated with the handsome young man, risking scandal when she brings him along to Paris in her coach.  But when her influential cousin Marquise d'Espard (Jeanne Balibar, "Cold War") disapproves, Lucien, who has introduced himself into society using the aristocratic name of his mother, de Rubempré, is cut loose.  Scrambling to earn his keep, Lucien learns the devious ways of 19th century yellow journalism, but his life will become one of “Lost Illusions.”

Cowriter (with Jacques Fieschi)/director Xavier Giannoli’s ("Marguerite") adaptation of Honoré de Balzac's serial novel is at once a dense historical period ‘rise and fall’ tale and a story about capitalism driven media that reverberates today.  The film won 7 César awards, including Best Picture, yet an over reliance on narration holds the film back from achieving true greatness.  That is not to say this isn’t a film to luxuriate in, its intricate plot and large and talented ensemble something to settle in with like a lush visualization of a well structured audiobook.

After tumbling about in the fields with his married lover, Lucien is determined to impress her in Paris, spending way beyond his means outfitting himself for the opera.  But his hair draws a frown even from Louise and d’Espard clearly views him as a rube.  The two-faced Baron du Châtelet (André Marcon, "Marguerite") further poisons the well, then pays the young man off to return to the country.

Instead Lucien finds a cheap room and begins to hunt for work, falling in with Etienne Lousteau (Vincent Lacoste, "Sorry Angel"), a ‘journalist’ who teaches him that everything’s for sale.  He’s given an immediate lesson when Lousteau suddenly dashes off after catching wind that Singali (Jean-François Stévenin, "The Limits of Control") has been paid off to destroy the stage debut of Lousteau’s mistress Florine (Candice Bouchet), arriving at the theater in time to make a counter offer.  Lucien learns that while Singali can be paid to sway audiences by seeding them with paid professionals, people like Lousteau sell reviews to the highest bidder.  Challenged to write his own about the performance of Boulevard actress Coralie (Salomé Dewaels) as a job tryout, he impresses Lousteau’s boss Finot (Louis-Do de Lencquesaing) and wins Coralie’s heart in the process.

Lucien rises to the top of his profession as Coralie wins a role in a National Theater production, unheard of for an actress of her humble origins, the two celebrating their success with lavish spending.  But Lucien still dances around Dauriat (Gérard Depardieu), the publisher who refused his poetry, looking for literary validation.  That combined with the potential to have the King officially recognize him as a de Rubempré catches Lucien between the liberals and the royalists in a bit of backstabbing he never sees coming and a conclusion that takes him full circle.

Voisin, who won the Most Promising Actor César for this role, holds his own amidst a seasoned cast.  As his mentor, Best Supporting Actor winner Lacoste is deliciously amoral.  French Canadian filmmaker Xavier Dolan ("Boy Erased") weights the other side of the scale as the ethical Royalist Nathan d'Anastazio whose novel impresses Lucien, just as de France is the Royalist victim alongside Lucien.  Breakout status must be granted to Salomé Dewaels, introduced as opportunistic hussy before revealing a pure heart and genuine talent.

The production is faultless, contrasting high Parisian society events with street theater and lowly taverns.  “Lost Illusions” is most startling, though, in its timeless depiction of ambition corrupting the high-minded.

Lucien de Rubempre (Benjamin Voison) lives in a rural province of France but has big dreams to move to Paris and pursue a successful writer’s life. But, when he makes the move, it is to find out that he is a very little fish in a great big pond in “Lost Illusions.”

Director Xavier Giannoli adapts Honore de Balzac’s early 19th century novel, Illusions Perdues, and brings it to the big screen in interesting ways. While the writer’s core story of ambition and corruption is obvious and apparent, there is a fascinating history of literature, journalism, modern theater and changing society in Bourbon Restoration France – when the French people turned away from democracy and brought the royalty, and all of its corruption, back into power.

If you want to see a movie about the birth of the free press in France, the beginning of payola in literature, the start of theater for the masses and the subjugation of that free press by an oppressive government wrapped up in a story of ambition and greed, “Lost Illusions” is the film for you.

Once the history lesson on the Bourbon Restoration is laid out – succinctly told, I might add, in voiceover narration which, unfortunately, is used throughout the film to excess – Lucien’s tale of ambition, his rise in Parisian literary circles, his utter corruption and greed and his fall from the power he so fervently sought plays out.

I cannot say that Lucien is particularly likable, he is often not, and I found it hard to sympathize with the man. Those closest to him, his friends and colleagues Nathan (Xavier Dolan) and Etienne (Vincent Lacoste) were far more appealing. Salome Dewaels, as Lucien’s ingénue and wife Coralie, makes a striking introduction.

I like the history lesson more than I do Lucien’s story, but that story is told with great skill, from direction and acting to production, cinematography and costume. I would have liked to have the main character a bit more appealing than he is, but that is more due to Balzac than it is to director Xavier Giannoli and the story adaptation (by Giannoli and Jacques Fieschi). It is a good look into a time and place I knew little about.