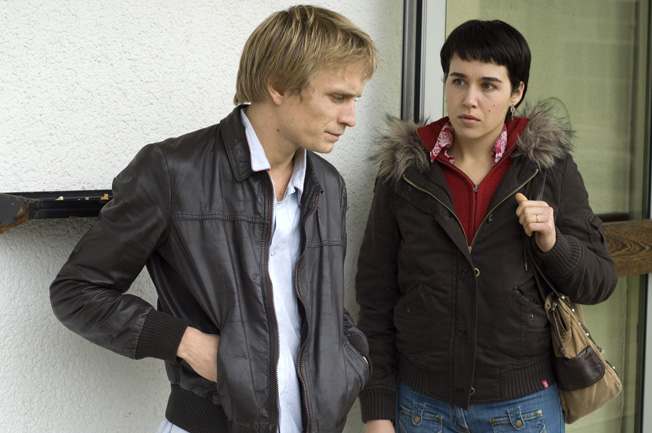 Lorna (Arta Dobroshi), an Albanian dreaming of opening a snack bar with her boyfriend, Sokol (Alban Ukaj, "Fuse"), is on the verge of obtaining her Belgian citizen card which will ensure them a $14,000 Euro loan from a local bank. That will enhance the thousands Lorna has already procured by marrying heroin junkie Claudy Moreau (Jérémie Renier, "L'enfant," "In Bruges") to obtain that citizenship in order to earn even more money by divorcing him and marrying a Russian. But the architect of this plan, Fabio (Fabrizio Rongione, "Rosetta"), has something more permanent than divorce in mind and he is counting on "Lorna's Silence."

Bressonian Belgian cowriter/director brothers Jean-Pierre and Luc Dardenne ("Rosetta," "The Son," "L'enfant") won the screenwriting award at the 2009 edition of the Cannes film festival, yet their film, arguably their best to date, was met with tepid reception. Maybe that reception sets one with lowered expectations, yet the Dardennes have moved to a new place with "Lorna's Silence." They are still pointing their camera at people living on the edges of society, but that camera is no longer the over-the-shoulder shakycam of previous films. This time around, they are more still, but with a psychological depth and metaphorical arc that harkens back to their "The Son" (Morgan Marinne, the 'son' of "The Son," appears here as Fabio's thug). Lorna's circumstance is defined by monetary transactions. In addition to the deals she is involved in to build a new life (Sokol travels around continental Europe acquiring work that adds to the pot), there is a focus on day to day transactions - the tab to use a pay phone, the payback for picking up Claudy's groceries, the money she doles out to him from an envelope when he decides to kick his drug habit. Our initial impression of Lorna is of a hard working, focused individual who is emotionally cold with everyone but Sokol (she is immensely pleased to see him during a brief meeting at a station as he passes through and later she is happy to be checking out vacant commercial spaces with him, making a home as it were). She rebuffs Claudy's pathetic cries for help, locking herself in her bedroom demanding silence so she can sleep and she refuses to 'help' him by locking him in during the day because she is afraid she will be inconvenienced should he decide he needs to get out. Claudy persists, however, and uses Lorna as a beacon, begging her to estimate when she will be home from work to give him something to hang onto. He even tries to cook dinner, but when Lorna is called away, she returns to find him with his drug dealer and Lorna snaps, throwing the dealer out, throwing her key out the window and using sex, the first between the married couple, to distract Claudy. It works, but later when withdrawal pains become too intense, Lorna helps Claudy to a hospital and now that she has begun to help him her humanity gains traction. She meets with Fabio and tries to convince him she can obtain a quickie divorce from Claudy. When Claudy refuses to punch her, Lorna beats her arms, later her forehead, into door frames and goes to the police (which Fabio frowns upon). Lorna succeeds and Fabio tells her he's spoken to the Russian who has agreed to wait, but this is a ruse to keep Lorna calm and she is stunned to find herself identifying Claudy at the morgue. From this point, it seems like everything with Lorna becomes an anti-transaction. Fabio offers a 'bonus' of 1,000 Euros for her having 'taken care of' Claudy, but she ignores it (she can't even get Claudy's mother to accept the remainder of his money). She retains a tie to Claudy that becomes a sticking point with everything she and Sokol have been building towards. The love she thought she shared with Sokol turns out to be more like the relationship she has with Fabio than she'd imagined. Lorna continues to divest herself of everything, slipping into a fairy tale world of cabins in the woods where children are threatened but for the promise of friendly peasants. Arta Dobroshi was nominated for Best Actress at the European Film Awards for this and her reactions to her situation are enthralling. The cold Lorna whom we first meet changes before our eyes as she begins to lift her silence. The gaunt Renier continues to haunt the film long after we last see him, riding away on his newly acquired bicycle. The Dardennes contrast harsh, urban realities in cold, antiseptic settings where money equals survival against family and nature and the kindness of strangers. "Lorna's Silence" is a strong character study set within a compelling morality tale.