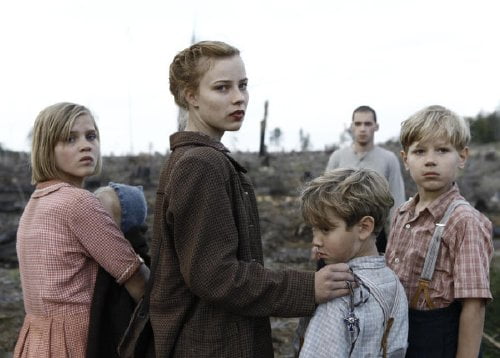 As World War II draws to a close and the enemies of Nazi Germany surge across its borders, a married couple, harboring a horrific secret, must leave their home immediately. They abandon their five children to cross the war-torn country, alone, to find their Omi (Grandma) in Hamburg. Responsibility for the children is borne on the slender shoulders of the eldest child, 14-year old “Lore.”

Germany, 1945. The family of a Nazi officer prepares to run, its five children pacified with vague stories. The eldest, a 14 year-old, sees her parents burning Jewish records and knows that her father has shot the family dog, but still hangs onto Der Fuhrer's words of glory. Until, that is, her mother deserts the children with a hostile farmer, telling her to make their way to their grandmother's hundreds of miles north. Everything she has ever known is about to change for "Lore." Australian cowriter (with Robin Mukherjee)/director Cate Shortland ("Somersault") has done something I no longer thought possible - made a film about the Holocaust with a fresh angle. This brilliantly directed and shot (cinematography by Adam Arkapaw "Animal Kingdom," "Snowtown") film is coming of age as loss of innocence - ironic given that the innocent is a member of the Hitler Youth - and the whole rests comfortably on newcomer Saskia Rosendahl's shoulders. Shortland is a master of tone here, beginning with a nightmarish, chaotic flight which grows darker during the journey and, perhaps darkest of all, at its final destination. We stay within Lore's (a nickname, short for Hannelore) point of view, nothing spelled out, many things not what they seem. The film's most enigmatic character is Thomas (Kai Malina, "The White Ribbon," perfectly cast), a young man of few words whom Lore first spies in an abandoned house, upstairs from a horrific scene of rape and murder. Thomas reappears at a refugee camp and tries to help the young girl trying to keep things together for her younger sister Liesel, twin brothers Günther and Jürgen and a squalling, hungry baby. The younger siblings take to him, but Lore remains suspicious, especially when she sees the papers which identify him as a Jew. Having heard tales of tortured children and worse about the American troops in the area, Thomas's papers represent an advantage. Lore and many older Germans don't know what to make of the photographs being posted showing the horrors of concentration camps. Many believe the Americans have manufactured everything. But clearly, American sympathies lie with the Jews and then there is the officer Lore spots in one of those pictures - could it be? Despite the horrible words Lore parrots, Rosendahl and her director maintain sympathy for this young girl thrust into huge responsibility. The film is like a Grimm Brothers story, beginning with a seemingly drunk and inappropriate father figure who leads them onto a road into the forest like a dark tunnel into a black void. Before her mother leaves, Lore witnesses her, bruised and bloodied about the thighs, just like the dead woman she will encounter many days later. In the film's most eerie scene, the children seek food from an older German farm woman, who has the boy twins sing a nationalistic folk song (the shot composition recalls "The Shining's" twins) before pleading to be left baby Peter, the better to barter for food with. It's 'Hansel & Gretel' made all too real and it is horrific. Lore and Thomas dance around each other, Lore growing closer yet continually withdrawing, until a tragedy changes everything. And yet the children find their idyllic end at the story book home of Omi, complete with her singing and dancing housekeeper. But Lore finally learns the bitter truth and the film's symbol of innocence is literally stamped to smithereens.

Based on Rachel Seiffert’s novel The Dark Room, director Cate Shortland and Robin Mukherjee’s adaptation gives a fresh spin on a subject that has always focused on the downtrodden victims of Nazi tyranny and their need to survive. “Lore” is a survival film, a coming-of-age story, a family drama and a history lesson, all rolled into one. It is also a journey of enlightenment as Lore, a girl brought up by her fanatical Nazi parents to hate Jews, learns that people are people, some good and some bad. 19-year old Saskia Rosendahl does an excellent job making you believe she is fourteen year old child forced to grow up too fast. It is a solid character study by a newcomer to the big screen. There is an organic feel to the film as Lore and her little family fight adversity and danger to make the harrowing journey to Hamburg. As they travel by whatever means they can, they are joined by a young mystery man who saves Lore and the kids from dangers and helps feed them all, But, Thomas (Kai-Peter Malina) is a Jew and Lore is torn down the middle. On one side, she has always been taught that Jews are only a step up from the ape and should be loathed. On the other, without the kind assistance of this Jewish man, she and her siblings could have perished. This back and forth controversy and the confusion it causes, with Saskia Rosendahl giving excellent depth to Lore, makes this the center of the young woman’s story, with the frantic backdrop of the chaos of post-war Germany.