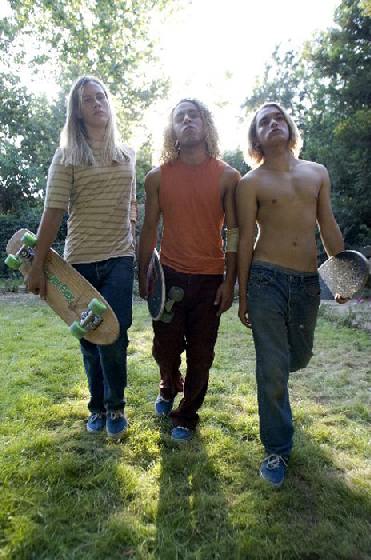 In the 1970’s riding the waves crashing against the wooden piers of Venice, California was the height of extreme sport, with the skateboard a mere tool for getting around town. Then, urethane wheels were invented and a devastating drought hit California, leaving a vast number of private swimming pools empty. Suddenly, the skaters have a whole new venue to test their board skills and a revolutionary breed of surfer is born in “The Lords of Dogtown.”

In 1975, Zephyr Surf Shop owner Skip Engblom (Heath Ledger, "The Order," "The Four Feathers") decreed who was cool enough to surf the Pacific Ocean Park Pier area of Venice Beach. The younger of his devotees looked to skateboards to maintain their surfing high on the ground. Two things would begin a cultural phenomenon - the invention of urethane wheels that would grip surfaces and 'boarder Jay Adams' (Emile Hirsch, "The Girl Next Door") idea of using abandoned swimming pools to push skating tricks to new heights. These young guys became the "Lords of Dogtown." Writer and preeminent Z-Boy Stacy Peralta follows up his award winning documentary "Dogtown and Z-Boys" with this feature film adaptation that expands upon the characters who created a subculture and the effects of fame upon their lives and it proves to be richer and more engrossing than his real life account. Maverick director Catherine Hardwicke ("Thirteen"), a Venice surfer herself, proves an ideal choice to bring this snapshot of a 1970's culture which still survives even if the place that birthed it has changed dramatically. When the kids who figured out how to keep on surfing after the morning waves diminished checked in with Skip, he began to manufacture their boards and formed a team, the Z-Boys, to promote them at the competitions which began to spring up. But Skip was a surfin' stoner, not a high-powered businessman, and one by one his 'stars' defected to the likes of Topper Burks (Johnny Knoxville, "Men in Black II") for big money deals. Tony Alva (Victor Rasuk, "Raising Victor Vargas") became the rock star of the sport while his ground breaking buddy Jay Adams is offered a $10,000 deal for a Slinky commercial. Stacy Peralta (John Robinson, "Elephant"), the clean cut longhair whom Skip denounced as not being 'a pirate,' also flew high on the corporate track until business overtook pleasure - a sponsored trip to Australia left him no time to surf. Business rivalry breaks friendships, until they are reunited over Sid (Michael Angarano, "Seabiscuit"), the fourth wheel who couldn't really skate well because of an undiagnosed brain tumor. "Dogtown" is recognizably a Hardwicke film, even though it is only her second. Cinematographer Elliot Davis ("A Love Song for Bobby Long," "Thirteen") achieves a look that seems part documentary, part animation with a wild color scheme emphasizing yellow and turquoise and day glo neons (particularly greens). Production Designer Chris Gorak, a long time collaborator of Hardwicke's, restored the look of the old Venice Beach in San Pedro. Original Music by Devo's Mark Mothersbaugh and a soundtrack supervised by Liza Richardson ("Y Tu Mama Tambien") creates the aural landscape. The three main actors are all believable and charismatic portraying the extreme athletes of their characters. Hirsch is almost unrecognizable with blond hair and proves he has the moves not only on the board but in a seductive dance he puts on for Peralta's girlfriend Kathy Alva (Nikki Reed, "Thirteen"). Victor Rasuk proves himself a star switching from the East Coast teen of "Victor Vargas" to the California vibe with the confidence of a rock star. Robinson, who made his debut in "Elephant," is the grounding force among the three, but just as intense on the boards. Ledger does the Val Kilmer role as Skip, a good performance hampered by what appears to be discomfort with a dental appliance. Rebecca De Mornay ("Identity") does the beat-up Kim Bassinger thing of "8 Mile" with equal veracity. "Lords of Dogtown" tells a common rise and fall story and may wrap with a sentimental cliche, but it does so with style and verve and delivers a historical place in a celluloid time capsule.

In 2001 the independent documentary, “Dogtown and Z-boys” hit the streets and chronicled the rise of the first players to make skateboarding the extreme sport that it still is today. Stacy Peralta, one of the original, influential members of Team Zephyr, brought their story to the screen, showing the beginnings of what would become a multi-billion dollar, worldwide industry. Filmmaker Catherine Hardwicke (“Thirteen”), utilizing Stacy Peralta’s original screenplay, brings us back to that highly-energized and radical time when skateboarding went from 360-degree spins and handstands to the revolutionary to the extreme methods of the Z-Boys. For the often-displaced kids of Venice, the Zephyr Surf Shop, owned by local legend Skip Engblom (Heath Ledger), is a second home. Skip is the first to see the business opportunities created by the radical skateboarding skills of the locals and puts together his Zephyr Skateboard Team. He recruits flashy Tony Alva (Victor Rasuk) and naturally talented Jay Adams (Emil Hirsch) as the core of his team and sets off to conquer new worlds. Skip leaves behind hardworking, responsible Stacy Peralta (John Robinson), a top skater, because he lacks a “pirate spirit” to be great. The film follows the members of the Zephyr Team as they, initially, wow the crowds at the skate competitions when they eschew the normal routines and introduce their many radical new moves. But, the judges likewise eschew the never-before-seen moves and disqualify the team members for not playing by the rules. But, it’s the audience that makes stars, not judges, and the Z-Boys become legends. The skateboarding skills of Alva, Adams and Peralta pave the way to fame, fortune and lucrative endorsement deals – or not. Rather than concentrate on the trappings of fame and influence, Catherine Hardwicke follows the lives of the principals of “Lords of Dogtown” and examines the effect their chosen lifestyle has upon each. Victor Rusak (“Raising Victor Vargas”) is cocky and ambitious as Tony Alva, the first of the Z-Boys to capitalize on his skills and newfound fame. He thrives on the money, women, fast cars and even faster lifestyle affording him by the burgeoning sport and is the first to leave the Zephyr Team nest for a better, richer life. John Robinson (“Elephant”), as Stacy, is the opposite of Tony and is more interested in the work ethic than in the fame his talent can bring. Jay Adams (Hirsch) is the Z-Boy with the raw, natural skateboarding talent but also has a single-minded radical streak that keeps him true to his own ideals but cause him to miss out on the financial opportunities afforded his friends. Hirsch (“The Girl Next Door”) puts the most dimensional spin on his character especially opposite Rebecca De Mornay as his free-spirited ex-hippy mother, Philaine. John Robinson gives a sincere, fresh-faced performance as underestimated Stacy Peralta who proves that a nice guy can come in first. Heath Ledger gives a likable, caricature rendition as the near-tragic Skip Engblom who had the bright idea of creating Team Zephyr but is left in the dust by his boys and the business they came to dominate. Slurring through prosthetic dentures, Ledger creates a sympathetic, laid back character in Skip. Recreating the dilapidated wooden pier of Venice CA, the place the Z-Boys got their start, and the Dogtown environs is accomplished nicely by production designer Chris Gorak and the location team. Lenser Elliot Davis keeps the action tight and fast as he helps to bring the viewer into the action-packed world of competitive skateboarding. Costume and makeup both contribute to giving the actors the period look and feel of the 1970’s. Catherine Hardwicke made an impressive directing bow with her hard-hitting, coming-of-age-too-fast film Thirteen.” She proves equal to the task, though without the confrontational angst of her first film, with “Lords of Dogtown” and lends an assured hand to her ensemble sophomore effort. The cast is good and acts well together. The screenplay is heartfelt and does justice in portraying the lives of those so affected by the extreme sport they created. If the number of skateboards I saw in the audience at Lords of Dogtown” is any indication, this is going to have a sizeable demographic showing extreme interest, especially if they can’t get in to see “Star Wars Episode 3: Revenge of the Sith.”