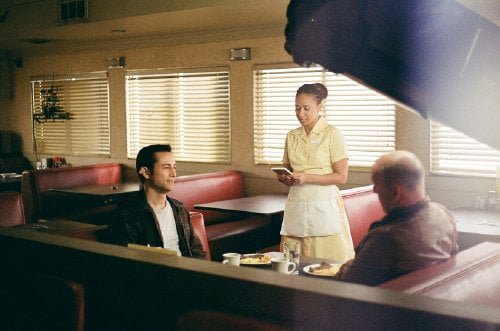 Joe (Joseph Gordon-Levitt) has an unusual job. It is the year 2042 and he waits in a remote, isolated spot, standing guard, with a blunderbuss, over a plastic tarp. Suddenly, a bound and hooded man appears and Joe guns him down with his hand cannon. This assassin of future victims has a problem when he is supposed to kill his 30-years older self (Bruce Willis) in “Looper”

In 2044, Joe (Joseph Gordon-Levitt, "Inception") is a junkie who works as an assassin, waiting for his big payday when he plans to move from Kansas City to France. It seems likely everything will go according to plan, because even though time travel hasn't been invented yet, it has 30 years in the future and the people he rubs out don't really exist in his world - they're sent back bound and bagged to a predetermined site for execution. Except that in 2074, time travel is illegal so Joe's payday will come in gold tied to his own thirty year older self who he is required to kill because he's a "Looper." Writer/director Rian Johnson ("Brick," "The Brothers Bloom") skips into a third genre for his third film (is he following in the footsteps of the Coen Brothers?), but while his sci-fi story idea is an intriguing one, something gets lost in its execution. The decision to make up star Gordon-Levitt to look like his 'future self' played by Bruce Willis was a bad one - it's a distraction and he looks more like Lou Diamond Phillips than he does Willis. Then there's the third act revelation that turns the whole enterprise into something that plays like "Memento" mashed up with one of Stephen King's telekinetic kid stories. There are several individual scenes that work, particularly one involving a future loop on the run in his past, but this film, highly praised coming out of festivals from Sundance to Toronto, loses its focus. Johnson is strong enough to come in with a great conceptual finish, one which links his loopers to a more universal 'cycle of vengeful violence.' Joe plugs his targets on a tarp stretched out beside a cornfield and disposes of them in an old abandoned warehouse before heading to a rural diner where he practices his French on Beatrix (Tracie Thoms, "Rent," "Descent"), the waitress. He lives in the city, hangs with fellow looper Seth (Paul Dano, "Ruby Sparks") and pays for sex with Suzie (Piper Perabo, "Coyote Ugly") at La Belle Aurore club, which is also the office of Abe (Gordon-Levitt's "The Lookout" costar Jeff Daniels), the local looper boss. When Seth lets his loop run, Joe is threatened with the loss of his silver stash if he doesn't give the guy up and after seeing how that all goes down, Joe's ready to close his own loop. But his future self has a strong motivation to stay alive - he intends to hunt down The Rainmaker, the head future loop man, as a child and kill him for having murdered his wife (Summer Qing) and when he shows up on that tarp he's loose and looking straight ahead and manages to make a run for it. At a diner meeting Old Joe explains to his younger self what went down during those thirty years, but young Joe decides to stay his course. His older self has three possible kids to dispatch and so he hunkers down at what he's sure will be the last location, a farm owned by single mom Sara (Emily Blunt, "Salmon Fishing on the Yemen") and her strange kid Cid (Pierce Gagnon, TV's 'One Tree Hill'). While Johnson's injected his script with all kinds of cool concepts (his references to gat men recall "Brick's" noir), he pretty much gets away from his loopers in the second half of the film, which seems like something else entirely. Now we have Joe trying to connect with Sara as we gradually learn what Cid's all about and what he's about is something like Stephen King's 'Firestarter.' If the first half is all futuristic cool crime stuff, the second is all about adding emotional heft and it only partially works. And while the ending is smart, it also leaves us begging the question if its finality was entirely necessary. The film looks cool, its Kansas locations often invoking Edward Hopper with a touch of Grant Wood. Special effects are OK, although a flying cycle is unconvincing and one effect is too "Take Shelter." The simple jump cut of a man appearing where there was previously nothing is more effective. As previously noted, the makeup on Joseph Gordon-Levitt should never have gotten a pass, but the actor himself is fine. Willis doesn't bring anything we haven't seen before, so why his particular visage was deemed so integral is a mystery. Blunt creates a more sympathetic character than either of them. The film also features Nick Gomez and Garret Dillahunt as looper lawmen. "Looper" is a stew of ideas where no single flavor sings.

I love science fiction, particularly anything that deals with time travel, so “Looper” had an immediate hook for me. Writer-director Rian Johnson puts his own spin on the consequences of travelling in time and meeting yourself. It has been the subject of countless sci-fi novels and movies (my absolute favorite is Isaac Asimov’s The End of Eternity) and, since no one has done it, yet, any interpretations and assumption made of what can happen is (sort of) valid. I like Johnson’s take on meeting and killing yourself in time and the idea of the title. A looper is the old self sent back 30 years to be assassinated by the young self, thus closing the loop. The problem is the story gets repetitive and is too long at 118 minutes. Efforts are made to change Joseph Gordon-Levitt’s looks to be more in line with older self Willis and the actor tries to mimic his senior’s manners and ways. Instead, it calls attention to the fact that no matter how much makeup and mannerism are used; Young Joe does not look like Old Joe. This restricts Gordon-Levitt to being so conscious of his mimicry, he fails to be his own character in “Looper.”. It makes me wonder what Young Joe would be like if the actor was not burdened by the restrictions imposed and allowed to do what he does best: act. Bruce Willis is OK in the senior veteran character role but it is not a stretch for the long time action star. Emily Blunt is charming as a single mom who knows something that we do not as she takes in fugitive Young Joe. But, the character and story line for her Sara feels added on to allow for an “Omen” style closing. Sara enters the film quite a ways through and there is little time to develop sympathy, especially after you meet her young son, Cid (Pierce Gagnon). The subplot revolving around Cid takes away from the sci-fi and time travel yarn, taking me out of the loop, so to speak.