Looney Tunes: Back in Action 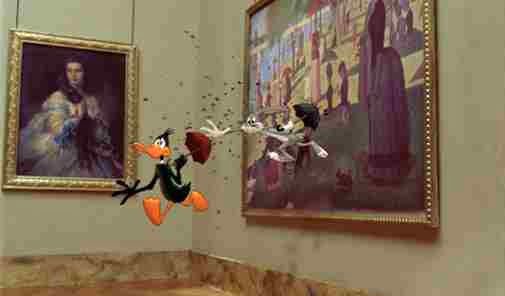 Bugs Bunny and Daffy Duck are back into their old feuding ways as the feathered fowl, once again, demands top billing with the universally loved rabbit and not suffer the indignity of being second banana anymore – or else. Warner VP of Comedy, Kate Houghton (Jenna Elfman) helps him with the “or else” and orders security guard DJ Drake (Brendan Fraser) to toss the errant duck out on his tail feathers. Daffy wreaks havoc on the studio lot and DJ loses his job, too. But, a nefarious scheme by Mr. Chairman (Steve Martin), the head honcho of the notorious ACME corporation, force Bugs, Daffy, DJ and Kate to join forces and save the world in “Looney Tunes: Back In Action.”

Daffy Duck is fired by Vice President of Comedy, Kate Houghton (Jenna Elfman, TV's "Dharma and Greg") for having demographics limited to fat guys in basements while Bugs draws laughs from the Brothers Warner meeting for belching on his carrot. Daffy's followed out the door by security guard DJ Drake (Brendan Fraser, "George of the Jungle"), an aspiring stunt man whose dad, unbeknownst to Houghton, is Warner's biggest star, Damien Drake (Timothy Dalton). Drake Sr. also turns out to be a real spy whose knowledge of the Blue Monkey diamond has made him the target of Acme head Mr. Chairman (Steve Martin, "Bringing Down the House"). DJ and Daffy set out to save the elder Drake, Houghton's in pursuit with Bugs to rehire the duck and it's the "Looney Tunes: Back in Action." After 1996's truly awful live action/Looney combination, "Space Jam," "Back in Action" is a big step in the right direction. It's got enough of the subversive humor that made the shorts so special that it probably requires multiple viewings to catch them all. However, despite the inspired casting of such human cartoons as Fraser, Martin and Cusack, the live action segments drag the Tunes down. Warner Brothers should bite the bullet and make a completely animated Looney feature. The dual chase (screenplay by Larry Doyle, "Duplex") clearly stamp Daffy as the underdog hero and Bugs as the corporate star by their pairings with DJ and Kate, who are obviously meant to end up together after a whirlwind tour which takes them through the bright lights of Las Vegas, the top tourist attractions of Paris, back to Area 52 (Area 51 was invented to hide it) and into outer space. However, the Blue Monkey diamond plot, which the evil Acme Chairman wants because of its ability to turn people into monkeys (cheap labor) and back again (consumers), borrows too many references from "The Powerpuff Girls Movie." The fun to be had here is almost always, with a few exceptions, in the asides and the Tunes themselves. The real diamond in "Looney Tunes: Back in Action" is a scene set in the Louvre, where Daffy and Bugs are chased by Elmer Fudd through a melting Dali painting which disables Fudd's gun. They're into Edvard Munch's The Scream before Fudd reacts and Daffy's pixilated exiting from Georges Seurat's A Sunday Afternoon on the Island of Le Grande Jatte" ends the chase on an 'educational' note. This montage is entirely animated and has the wit and smarts of the original cartoons. Perhaps inspired by this, the following live action sequence, in which DJ rescues Kate hanging from a helicopter hovering about the top of the Eiffel Tower, is the film's best - Fraser swings across the frame grabbing flowers and chocolates along the way. However, another brilliant bit of animation, a black and white recreation of "Psycho's" shower scene with Bugs, has its punch pulled when it's incorporated back into a live action 'joke' that falls flat. Meanwhile, the ultimate bad guy has little interaction with animation. Steve Martin, whose performance is entirely guided by his three-sizes-too-small suit jacket, is surrounded by silent (and wasted) advisors - Vice President Rhetorical Questions (Robert Picardo), V.P. Bad Ideas (Mary Woronov), V.P. Never Learning (Ron Perlman), V.P. Stating the Obvious (Marc Lawrence), V.P. Child Labor (Vernon G. Wells), V.P. Nitpicking (Bill McKinney), V.P. Clawing Way to Top (Leo Rossi), and finally, V.P. Unfairly Promoted (George Murdock). Perlman gets one line and Woronov is like the cat to Mr. Chairman's Le Pew. After starting off with a bunch of Warner Brothers lot in-jokes (a commissary scene features Scooby Doo and Shaggy critiquing Matthew Lillard, Daffy commandeers the real Batmobile), the bright lights of Vegas are used to showcase Fraser's stunt inabilities (he crash lands onto a table where dogs playing poker bark furiously at him) and the charms of Yosemite Sam's club singer Dusty Trails (Heather Locklear, "Uptown Girls"). The Fremont Street Experience is an almost too-dazzling backdrop for the colorful toons. After an ingenious use of product placement (Walmart allows for a costume change), the group discovers that the mysteriously mentioned 'Mother' is Joan Cusack ("The School of Rock"), head of Area 52 who has predicted that the day would come where the aliens housed there (Robby the Robot, the Metaluna Mutant, the Man From Planet X and Robot Monster) would revolt (led of course, by Marvin Martian). Enter Duck Dodgers (and one of the film's funniest visual gags involving the diamond and an orbiting satellite) to save the day. When Dodgers and the rabbit crash land back at Acme, Daffy frets over the scratched spaceship. 'Don't worry, it's a rental,' replies Bugs. Despite flashes of brilliance, unfortunately the hare's right by a hair.