Looking for Comedy in the Muslim World 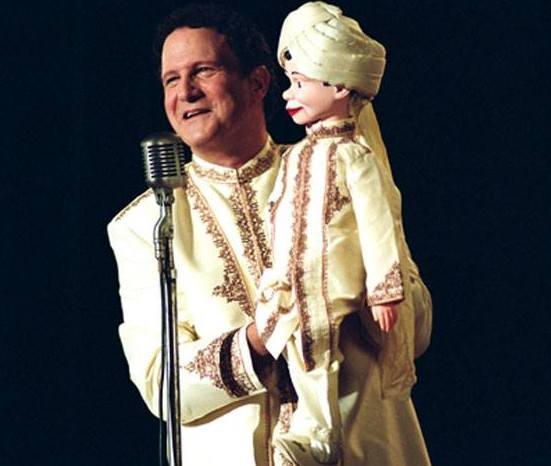 Out of work comedian Albert Brooks is game for anything when a United States Commission proposes a most unusual assignment. In order to better understand our Middle Eastern brethren, particularly the Muslims, they ask him to go "Looking for Comedy in the Muslim World."

Writer/director/star Albert Brooks ("The Muse") has slapped an attention grabbing title on his lamest piece of work to date. Rather than its intriguing titular idea, "Looking for Comedy," which he does in India, not Iraq or Iran or Saudi Arabia by the by, is more about the tender ego of a comedian who needs to feel the love of an audience. There are a few softballs lobbed at the bureaucracy of the U.S. Government and Indian outsourced support hotlines, but the film is only intermittently funny. Very intermittently. Giving him the benefit of the doubt, Brooks has perhaps made his points too subtly. After flunking an audition with Penny Marshall (herself) for her remake of "Harvey," Brooks's wife Emily (Amy Ryan, "Capote") guides him towards the U.S. State Department's unusual proposal. Senator/actor Fred Dalton Thompson (himself) opens with 'The president has a pretty god sense of humor, as you know,' securing Brooks's funniest reaction, then outlines the assignment - two weeks each in India and Pakistan and a 500-page report on what makes their Muslim people laugh. The lure of a Medal of Freedom ('That's the nice one.') and the offer of help with the report writing seal the deal. Brooks frets (as usual) over being bumped into Economy, then the size of the New Delhi office procured by the State Department flunkies, Stewart (John Carroll Lynch, "Gothika") and Mark (Jon Tenney, "You Can Count on Me"), who've accompanied him. He secures the services of Maya (Sheetal Sheth, "American Chai") as his assistant after a succession of women who cannot type and want to work with Mel Gibson. After a series of on-the-street interviews provides little material, Brooks decides to put on a stand-up comedy show in a city that has no comedy clubs. His painfully unfunny material yields no laughs. Grasping at straws, Brooks makes an illegal foray over the border at Lahore in order to meet with budding Pakistani comics, where the same material slays them. With his report bulked up to three pages, Brooks's skin is saved when he's pulled out two weeks early due to the Indian Level 3 Alert he's inadvertently caused. Instead of being relieved, Albert moans some more when his six page report yields nothing in return. There are three types of comedy in "Muslim World." First there are the semi-amusing ideas that are done to death. Down the hall from his New Delhi office, we hear phones being answered for Harry and David, The Gap, The White House, and the William Morris Agency. Mark continually begins conversations with an unseen caller on a minuscule earphone which Brooks believes are directed at him. Secondly there are the actual funny bits. Brooks is repeatedly referred to as 'the fish cartoon guy,' a recognized role that gets him pitched a sitcom, "That Darn Jew!," by the Al Jezeera network. The Pakistani comics enjoy their own laughs with a practical joke that panics their already panicky guest. Thirdly and most frequently are the bits that just don't work. A yoga club that uses laughter perplexes its American visitor. Brooks obsesses over Maya's decision to also print directions to his show in Hindi in case non-English speakers show up (they don't). Brooks's act, which includes a botched ventriloquist act and a sabotaged piece of audience-fed improv, is supposed to be satirically self-aware, but it just comes across as inept. One can imagine that "Looking for Comedy in the Muslim World" must have been a logistical challenge, filming in mosques and at the Taj Mahal (which Brooks' failure to see is supposed to be a comical insight into his Western shortsightedness), but the film has an amateurish quality that's present even on home turf. Brooks is drawn into the romantic tribulations of his assistant Maya and agrees to meet with her Iranian boyfriend Majeed (Home Doroodian, "The North End"), but the young man, who was present at his show, just wants to know what happens in the U.S. after a disastrous act. 'You're allowed to bomb, it's not the end of the world. Jesus!' Brooks tells him. Good to know he's got a shot a redemption.