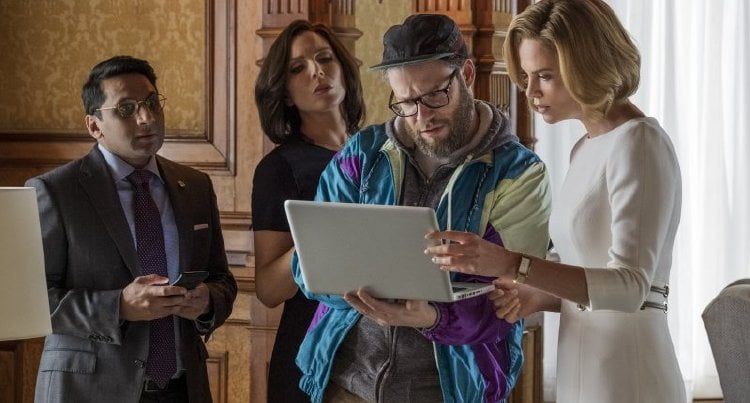 We meet Brooklyn Advocate investigative journalist Fred Flarsky (Seth Rogen) undercover recording the meeting of a white supremacist group. The Jewish reporter is in the process of getting a Swastika tattoo when he’s outed. He gets away, only to learn that his paper is being acquired by the Rupert Murdochesque Parker Wembley (Andy Serkis). Flarsky quits on principle and turns to his rich best friend Lance (O’Shea Jackson Jr.) for some cheering up. The next thing he knows, he’s rubbing elbows at a fundraiser with Secretary of State Charlotte Field (Charlize Theron), his former crush and babysitter, now an unannounced presidential “Long Shot.”

From the director (Jonathan Levine) and costar (Rogen) who matched an NPR radio host diagnosed with a rare form of cancer with his therapist in the charming, thought-provoking 2011 romcom “50/50” comes another unlikely pairing you will find yourself rooting for as they navigate today’s political landscape. Rogen’s hotness quotient may never be on the same level as Theron’s, but these two actors click so completely it is never in doubt that their characters are made for one another. The combination of writers Liz Hannah (“The Post”) and Dan Sterling’s (‘The Sarah Silverman Show’) past credits may seem as off kilter as the casting, but their mix of political story telling and comedy writing meshes just as successfully. We meet the adult Charlotte before Fred does. She’s called to the Oval by President Chambers (Bob Odenkirk) who she finds watching a rerun of himself playing the president on the series which presumably got him elected. He confides that he is not going to seek reelection, instead using his new level of fame for a shot at the big screen. Charlotte seizes the opportunity to manipulate him into an endorsement. He also suggests she milk press response her flirtatious pairing with good looking Canadian Prime Minister James Steward (Alexander Skarsgård) by cementing the relationship. It is quite clear who has the smarts in the room and it is not the President. After Fred and Charlotte bond over Boyz II Men and old memories, Fred makes a splash by coming to her defense by subverting Wembley’s attempt to get a one-on-one before sliding down a staircase on his belly in full view of everyone. Charlotte’s charmed enough to ask her Chief of Staff Maggie (June Diane Raphael) to interview him for a speechwriting position. Maggie’s dead set against it, but she’s overruled. Fred’s thrilled with the idea of Maggie’s Global Rehabilitation Initiative, the ‘seas, bees and trees’ project she’s intent on getting 100 countries to sign onto while circumventing the President. But as Fred is drawn into the international diplomatic scene, he’s disturbed by the political compromises Charlotte, so idealistic in her youth, is forced to make. The reason the sophisticated beauty and the schlubby journalist (although Rogen’s never looked trimmer) work so well is because beneath the surface, they’re both smart and nerdy with a shared sense of irreverent humor and musical tastes. Simply put, he gets her and in the circles she travels in that doesn’t happen. Charlotte would never share a story about her ‘Delhi belly’ with Steward, let alone suggest busting stress by ‘smoking molly.’ And while at first Charlotte’s team works against Fred (he’s made to look ridiculous in a ‘traditional Swedish gentleman’s costume’ at an event), they gradually come around, Agent M (Tristan D. Lalla) a particularly trusted ally after spying Fred leaving Charlotte’s hotel room. The two face both danger and international incidents together, the latter giving Theron’s comedy chops a real workout. Smartly, the physical mismatch is worked right into the script, Maggie continually pointing at ‘E scores’ comparing Fred to Steward (Skarsgård nimbly takes him from flirtatious mystery to off-putting creep). Even more impressive is how Hannah and Sterling anticipate the Jeff Bezos/National Enquirer scandal with their climactic romcom obstacle. The film has a bit of a bumpy landing, a character’s party affiliation coming too far from left field, the conclusion rushed. Still, make no mistake, “Long Shot” will be anything but when it comes to pleasing crowds at the multiplex. Grade: