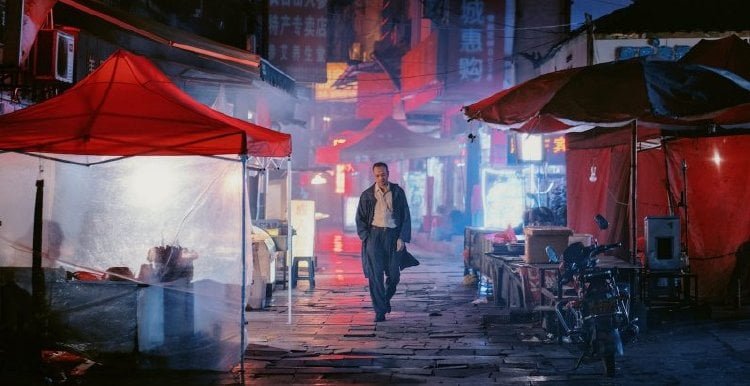 Luo (Jue Huang) fled his home in Kaili 12 years ago. Since then, he has been haunted by the memory of the woman he loved and lost and returns home to find her in “Long Day’s Journey into Night.”

Three years ago, a young Chinese filmmaker from the Guizhou province broke through with an extraordinary debut. “Kaili Blues” played with time and memory as a doctor went on a search for his nephew that included a jaw-dropping forty plus minute handheld single take. Bi Gan’s second film, named after but having nothing to do with Eugene O’Neill’s “Long Day’s Journey Into Night,” is a neo-noir split into two pieces which also plays with time and memory as Luo Hongwu (played by Huang Jue) returns to Kaili after the death of his father to search for the woman he cannot forget, Wan Qiwen (Tang Wei, “Lust, Caution”). The film’s last hour is another single sequence take, this time in 3D (the film available for review was in 2D). Gan’s film has been compared to the work of Wong Kar-Wai for its humid, sultry atmosphere (southwestern China’s Guizhou is subtropical), but I also see much of David Lynch’s “Blue Velvet” here, albeit a less perverse one - a sultry singer, a singing gangster, a mysterious woman who maybe has a double or maybe not, dreams colliding with memories, prominent light sources and shadowy underworlds. The film’s sound design is striking, all dripping water, twangy guitar, maracas and unearthly choir. ‘Any time I saw her, I started thinking about dreams.’ Luo tells us as we watch long takes of him traveling (a constant theme with trains, scooters, cable cars and even unassisted flight). He also tells us that ‘Everything seemed to begin with death,’ his friend Wildcat’s (Lee Hong-chi) murder his impetus for leaving Kaili. At the family restaurant, Luo tells his stepmother to keep its name, Feng’s, as that was the name of his mother. She tells him his father sat drinking under a broken clock. Luo takes this clock, later finding a photograph inside, the face of a woman obscured with a cigarette burn, the name Tai Zhaomei and a telephone number written on it. That telephone number leads him to Tai in a women’s prison, her almost direct address to the camera full of regret for a life not well lived. She gives him the name of a famous singer in the province. An ex-husband, an old dog, a karaoke bar on the brink of destruction and Luo is no closer to his goal. As Luo takes on the guise of detective looking for Wan Qiwen, Gan frequently returns to memories of 2000. Wan Qiwen talks about an aborted baby boy and that Zuo, her gangster boyfriend is returning to Kaili. Luo wishes for them to leave Kaili. An eerie scene with Zuo portends he didn’t leave soon enough. The film’s title comes up at its midpoint and we enter that 3D dream, Luo hand pumping a mining car. Dream logic finds an accomplice in a 12 year-old boy who suggests he be called ‘Ping Pong Supercat,’ but whom Luo calls Wildcat. Luo recognizes the owner of a gaming parlor, but Kaizhen (also played by Wei Tang, her hair styled differently) insists she is not the woman he thinks she is as she walks away from the sound of her coin hitting a jackpot. A swirling camera will capture a kiss between the two before floating into the heavens, just the way Luo says Wan Qiwen made him feel. ‘Films are always false. Memories are a mix of truth and lies.’ Luo tells us. In Gan’s lush and lovely film, cinematic devices tie memories to dreams. Luo’s mother once told him people are less likely to lie when they are distracted by eating, apples a tie between Luo and Wildcat, pomelos Wan’s favorite. Kaizhen speaks of infertility with words open to interpretation. Even Wan Qiwen’s name hangs in the air like Zuo’s cigarette smoke, her identity alternately Luo’s love, a famous singer or a movie star. “Long Day’s Journey Into Night” is like a fever dream which breaks into the light of dawn. You may have trouble navigating its plot, but if ever there was a movie to get lost in, this is it. Grade:

This is the second feature for director Gan Bi. His first, “Kaili Blues (2015),” tells the story of a doctor who journeys to his home town in search of his nephew. The helmer uses the theme again, but this time there is a lost love to find as Luo treks back into his past life. Flash backs, flash back within flash backs and jumps to the present are a part of the story’s mystical fabric. As Luo searches for his mystery lady, lines blur between what is real and what is the product of flawed memories. This is a very personal film for its creator, Gan Bi, and, to me, it feels like we are seeing aspects of his personal life and its losses. The story is about a journey, both linear and metaphysical, and I felt like I was being taken along on the trek.