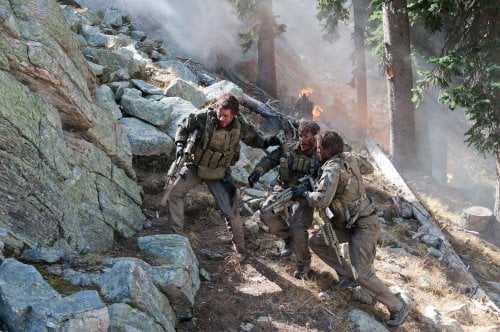 Late on the night of 27 June 2005, a pair of MH-47 helicopters dropped members of SEAL Team 10 a mile and a half from a Named Area of Interest to search for a high-ranking Taliban leader. What started as a quick in and out mission turns into a battle for survival for the four-man team as they are surrounded and attacked by a small army of heavily-armed Taliban fighters. The men fight brilliantly against enormous odds but, when the dust of battle settles, there will be one “Lone Survivor.”

Writer/director Peter Berg ("The Kingdom," "Battleship") and his coproducer/star Mark Wahlberg have adapted Marcus Luttrell's book with an eye towards martyrdom. While this story of four Navy Seals (Wahlberg as Lutrrell, Taylor Kitsch as Captain Michael Murphy, Emile Hirsch as Danny Dietz and Ben Foster as Matt 'Axe' Axelson) whose mission of 'many moving parts' is tense, Berg's fetishizing of every bullet and body blow during his extensive firefight is tasteless. The logistics of the situation holds enough drama, but the filmmaker indulges in slo mo splatter, multiple angles of kill shots and bone crunching tumbles down rocky slopes, glorying in the violence done to these men. It's "The Passion of the Christ" missing the self-sacrificial will. Berg also can't resist heroic cliches, and so we have the men walking abreast before they're blown into the air. Dialogue is often too neatly punctuated with gun shots. Foster makes the strongest impression as the guy with the strongest survival instinct who keeps on fighting well past imaginable human endurance. The film also stars Eric Bana as the base Lieutenant Commander and "The Hunger Games's" Alexander Ludwig as Shane Patton, the rookie whose indecision impacts the men in the field. (And if you think Ron Burgundy's been everywhere lately, well he even makes an appearance here.)

This is a labor of love by Peter Berg and co-producer Mark Wahlberg, both of whom worked at a discount to make “Lone Survivor.” The project took the filmmakers five years to bring to fruition and you can see their commitment to show the tragic story as realistically as possible. This is done in a matter of fact manner as the mission begins with the briefing that would change the team’s destiny. The aim of the mission, named Operation Redwing, is for SEAL Team 10 kill to capture, if possible, or kill the high-ranking Ahmad Shah and his chief lieutenant Taraq who, intelligence says, are in the NAI with only a few Taliban fighters around them. When the team rappels down from their helicopter, they set up in a camouflaged spot near the village. Very soon, though, they learn that the intelligence was wrong and many more than a few fighters are there. Team commander Mike Murphy (Taylor Kitsch) n to abort the mission but two things happen that makes things go totally wrong. Even if you already know the story from Marcus Luttrell’s account in his book Lone Survivor, the film brings to life the violence and brutality of battle. There is tension from the start as SEAL Team 10’s leader, Lt. Commander Erik Kristensen (Eric Bana), briefs his four-man squad on there capture/kill mission. This tension ramps up when the team, once on the ground, realizes their assignment has gone terribly wrong and they have to fight for their lives. Some may find the battle sequences to be over done, but the filmmakers use their over-the-top action to accentuate the desperation of the team members – Mike Murphy, Marcus Luttrell (Mark Wahlberg), Danny Dietz (Emile Hirsch) and Matt “Axe” Axelson (Ben Foster) – in trying to survive. The actors all do a good job in giving their characters life and you really sympathize with their plight. The battle scenes, and there are many, are tightly edited to show the confusion of the fight as both sides get all shot to hell. Be aware that the violence of that day is not downplayed. “Lone Survivor” does a solid job in depicting true events but is not of the caliber of such films as Kathryn Bigelow’s terrific “The Hurt Locker.” It is, though, an honest film about survival during war.