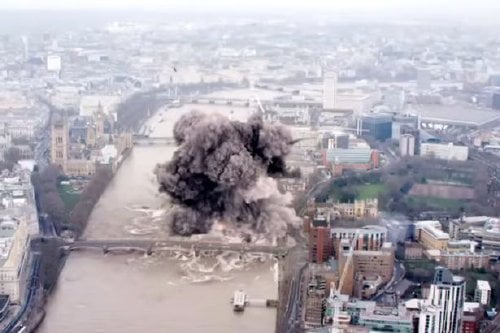 It has been a few years since Secret Service agent Mike Banning (Gerard Butler) saved President Benjamin Asher (Aaron Eckhart) from North Korean terrorists. Now, the British Prime Minister has died and the heads of the world’s nations journey to a locked down London for the funeral. Unknown, though, is a massive terrorist plot to kill the heads of state, including and especially the president, when “London Has Fallen.”

I eventually watched “Olympus Has Fallen” about the same time I caught “White House Down.” I liked the latter film much more than the generic original “Fallen.” “London Has Fallen” is a mere extension of the original shoot ‘em up thriller, with a greater body count, more non-stop action and lots and lots of bullets. This time, it is not just the White House under siege, it is the entire city of London. Here is the story: dead British prime minister, heads of state gather to pay honor, terrorists come out of the woodwork and blow the crap out of historic landmarks and people, all to capture and behead the American president as revenge for the killing of the daughter of terrorist leader Aamir Barkawi (Alon Aboutboul) in a drone strike. Once the story line is set up, “London Has Fallen” switches gears to the aforementioned body count and bullets. The bad guys are disguised as police and other official types as they unleash mayhem upon London. But, stalwart Mike Banning has the superhero ability to always kill the bad guys (and there are many) to protect the president and never a real cop or soldier. All of this goes on, of course, as Mike and President Ben banter good naturedly amidst the chaos. Basically, leave your brain outside the theater and let the games begin! “London Has Fallen” requires little thought, if any. It is an action thriller that is squarely aimed at the same audience that made the first a middling success. More is better in the minds of the filmmakers responsible for this repetitive kill fest. They never heard that less is more, I guess.