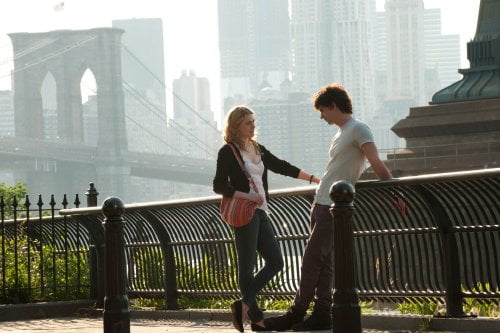 Lola (Greta Gerwig) is approaching her 30th birthday and is just three weeks away from her wedding to Luke (Joel Kinnaman) when he drops THE bombshell: he is breaking up with her. She begins a spiral downward with meaningless sex, over-imbibing in booze and pot and sleeping way too much in “Lola Versus.”

When she turns twenty-nine, everything seems go be going right for Lola (Greta Gerwig, "Damsels in Distress"). She lives with her good looking artist boyfriend Luke (Joel Kinnaman, AMC's 'The Killing,' "Safe House") in a sizable Lower East Side loft and he's just proposed. But once she's immersed in wedding plans with only a few weeks to go, her world comes crashing down and on just about every front, it's "Lola Versus." Cowriter (with his "Breaking Upwards" partner/star Zoe Lister Jones )/director Daryl Wein moves from micro-budgeted relationship indie to a starrier studio distributed romcom and the strain is evident. "Lola versus" plays like a Lena Dunham wannabe crossed with a cutesy commercial chick flick and the usually spot-on Gerwig wears out her welcome. The first warning signal is when we learn that Luke, who lives in a huge NYC loft, is an artist who paints pictures culled from celebrity sex tapes. Lola never has any visible means of support except for waitressing at her mother's cafe. She's able to move back into her own sublet apartment with ease because her subletter has just gotten engaged - cue the waterworks (oh the irony!). Lola leans most heavily on her and Luke's mutual friend Henry (Hamish Linklater, "Battleship"), who is clearly the right match for Lola, but she's determined to torpedo every relationship in her path wallowing in her misery. She meets a real weirdo, Nick Oyster (Ebon Moss-Bachrach, "Higher Ground"), at Russ & Daughters deli, but then again, Lola's the one eating smoked salmon not because she likes fish (she doesn't) but because she needs something salty. Come again? Oh, and so of course she ends up bedding Nick in a scene that induces skin crawl. There's the painfully abstract off-off-off Broadway play cliche starring Lola's friend Alice (Lister Jones) ('It was a metaphor for genital mutilation - you didn't get that?'). Alice is actually a pretty interesting character and Lister Jones is better than much of the material she's written for herself (like having herself turn up at Henry's gig tanning bed orange), just like Linklater makes Henry immensely decent, funny and likable (*and* believable fronting a band). The filmmakers have also cast actors as Lola's parents who actually look like they could have conceived her (Debra Winger, "Rachel Getting Married" and Bill Pullman, "Lost Highway," "Bottle Shock"). But neither they nor Gerwig can make Lola someone worth routing for - a thesis subject on 'silence in French literature' inadequately linked back to the story and a quirk of always having the clasp of her necklace centered at her throat do not flesh someone out. The filmmakers often seem uncertain, throwing in a few, randomly placed fantastical reveries that feel like a device which should either have been committed to or abandoned altogether. In the end, we get Lola reuniting everyone for her 30th birthday. You won't believe what she has learned.

Lola is not a likable person. She betrays friends, is thoroughly self-absorbed, sleeps around and indulges herself at the expense of others, including her friends, Hank (Hamish Linklater) and Alice (Zoe Lister-Jones, who also co-wrote the screenplay, giving herself the best funny lines). Lacking an empathetic, or even a little sympathetic, character is a real problem for “Lola Versus.” Everyone else – Hank, Alice, Luke and the rest – are OK but who would let her treat them so badly? Or, even call her a friend? Sophomore feature director (and co-writer) Daryl Wein shows little sense for romantic comedy. The story is merely a series of Lola’s screw ups, which in a normal world would result with her being stoned to death by the angry mob of the many people she hurts. I cannot tell if the problem is the character, the actress (Gerwig) or the director, all three or a combination but the result is still a story of an unlikable person doing wrong to those around her. This is hardly a drawing card for a movie, especially a romantic comedy.