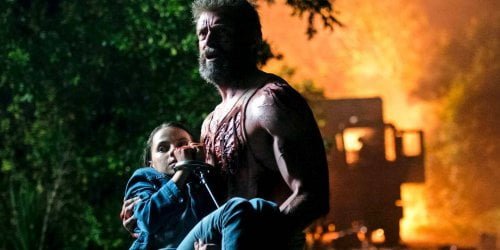 In 2024, a decimated mutant population is no longer a force. The weakened Wolverine (Hugh Jackson) is working as a chauffeur and caring for Professor X (Patrick Stewart) when he's asked to drive a child named Laura (Dafne Keen) to the Canadian border. At first, he declines, but Professor X has been waiting for this girl, whose DNA ties her to "Logan."

Seeing an endless stream of superhero movies takes a toll. They all tend to meld together after a while. Of all the DC and Marvel movies, the "X-Men" series has been the best at bucking that trend, but Wolverine was never a favorite of mine. Well darned if Hugh Jackman hasn't changed my mind as he exits the franchise with the third of the standalone Wolverine films. Cowriter (with "Green Lantern's" Michael Green and "The Wolverine's" Scott Frank)/director James Mangold ("Walk the Line," "The Wolverine") has wrapped the trilogy with R-rated violence and gore while also giving his protagonist that which has always eluded him. Blessedly, there is little in the way of CGI at work in what can best be described as a road movie actioner, the film's central conflict a very human one. The film's prologue establishes Logan's current state. He awakens from a drunken stupor in the back of his limo as thugs are stealing his rims. His claws come out, but he's weakened, almost bettered in the ensuing fight. When he returns home, it really sinks in how bad things have gotten. In the abandoned metal husk of a smelting plant on the Mexican border, Caliban (Stephen Merchant, HBO's 'Hello Ladies'), the albino mutant who cannot be exposed to the sun, acts as housekeeper and caretaker of Xavier when Logan's not around. Xavier is locked in, drugged to prevent the earth-rattling seizures which are overtaking the old man. Xavier's coming in and out of lucidity, but no matter how much he talks about a young girl, Logan insists there are no new mutants. When Logan gets a call from the Liberty Motel (we've already seen a battered Statue of Liberty, a visual symbol of the film's themes), he finds devastation, Gabriela (Elizabeth Rodriguez, "The Drop"), the women whose earlier pleas he'd ignored, dead. But although he returns to home base with Laura in tow, Alkali's Donald Pierce (Boyd Holbrook, "Gone Girl") and his cyborg Reavers arrive in no time. Outnumbered, Logan is astonished when Laura wields her weapons - metal claws just like his on both her hands and feet. Having barely gotten away, Logan learns that his mute charge dreams of reuniting with the other child mutants created by Dr. Zander Rice (Richard E. Grant) and saved from euthanasia by nurses like Gabriela, but he scoffs at her idea of Eden, found, in of all places, in an X-Men comic. But what's so refreshing about "Logan" is how divorced it is from the genre that spawned it. Mangold's made a film about family, from Xavier and Logan's father/son relationship to Logan and Caliban's prickly brotherhood to Logan's relationship with Laura and Laura's to the maternal Gabriela and her fellow lab-created mutants (another idea for weaponry gone wrong). There's even a regular family, the Munsons (Eriq La Salle, Elise Neal and Quincy Fouse), who reciprocate Logan's roadside assistance with their horses with a home cooked meal and bed for the evening, something which Xavier exults in. The scruffed up Jackman speaking with Dirty Harry gravel has never been better as this character, tired and hopeless, struggling to fulfill his duty, reluctant to take on more, his better nature always coming through when things are at their bleakest. 11 year-old newcomer Dafne Keen is a real find, her gymnastics and aerial arts experience in Spain allowing her to perform most of her own stunts. She's ferocious and feral, but she's also a natural actress who takes Laura through a story arc which changes her. Stewart, too, shines here, his paternal wisdom an enveloping love. Grade: