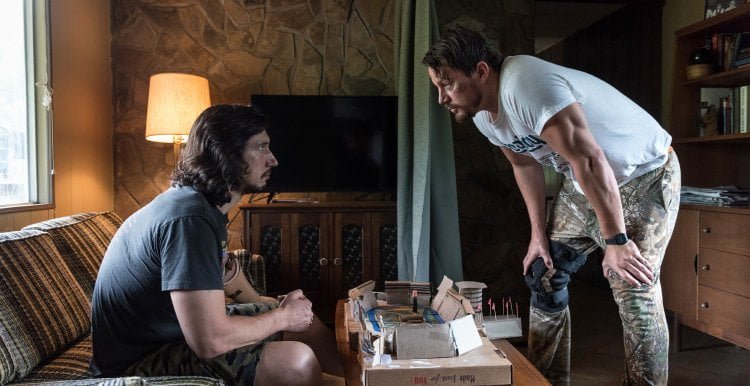 Jimmy Logan (Channing Tatum) had hopes of being the big football star until he blew out his knee in a game. An official for the mining company he works for tells him, because he was seen limping on the job, that he is being let go for having a “pre-existing condition.” Broke and desperate, he makes a plan with his one-armed brother, Clyde (Adam Driver), to rob the vault during the NASCAR’s Coca Cola 600 and change the family’s perpetual bad fortune in “Logan Lucky.”

Former West Virginian coal miner Jimmy Logan (Channing Tatum) is struggling to pay child support for the daughter, Sadie (Farrah Mackenzie), he adores when he loses his job repairing a sinkhole at North Carolina’s Charlotte Motor Speedway for a preexisting injury. The former high school football star presents an idea to his brother Clyde (Adam Driver), a bartender who lost an arm fighting in Iraq, who reminds him of the 'Logan family curse.' But Jimmy is undeterred and the brothers enlist demolition expert Joe Bang (Daniel Craig), who they will have to spring from prison to pull off the Speedway heist Jimmy has envisioned in "Logan Lucky." Writer/cinematographer/director Steven Soderbergh abandons his movie retirement with this southern gearhead spin on his "Ocean's Eleven" reboot, a project he hopes may pave a new path in film distribution that skirts major studios. With a charmingly relatable cast of quirky losers (Craig, playing comically against type with a bleached buzzcut, southern drawl and decidedly unusual blasting methods, is the cherry on top) and a plot that unfolds like a Rube Goldberg construction, "Logan Lucky" is ideal summer entertainment. The Logan brothers have also enlisted their sister Mellie (Riley Keough, "It Comes at Night"), a beautician with a need for speed. She 'borrows' Jimmy's ex-wife Bobbie Jo's (Katie Holmes) new husband's midlife crisis muscle car to transport the jail birds, Clyde's arrest part of their elaborate plan which includes returning the men to their cells before Warden Burns (Dwight Yoakam) catches on. It all involves the Speedway's underground pneumatic tube system that feeds vendor cash into a mail vault, a path they trace by delivering a birthday cake, staging a parking lot accident and letting loose nail polish coded cockroaches. There are so many working pieces, trying to fit them all together eventually proves futile, but it doesn't really matter as we're having so much fun. The mix also contains Joe's born again dimwit brothers Fish and Sam Bang (Jack Quaid and Brian Gleeson, "Snow White and the Huntsman") and obstacles like obnoxious British race-team owner Max Chilblain (Seth MacFarlane) and the health conscious driver Dayton White (Sebastian Stan, "Captain America: Civil War") who bucks at shilling his energy drinks (for good reason as it turns out). Jimmy may think he's triumphant, but he's got a few problems dogging him after the deed is done, like the fact that Clyde's artificial arm's been sucked into the tube system, the FBI agent, Sarah Grayson (Hilary Swank), who isn't convinced by official conclusions and the old high school classmate, Sylvia Harrison (Katherine Waterson, "Fantastic Beasts and Where to Find Them") who's recognized a Robin Hood. Will the Logan family take another turn around the track? If they do, I'll be watching. Grade:

Steven Soderbergh claimed retirement from feature filmmaking after he wrapped “Behind the Candelabra” in 2013. Sure, he directed episodes of “The Knick” for TV, but I do not think that is enough for the old filmmaking fire horse. He dons his harness once again to give us a grunge, blue-collar version of “Ocean’s 11 (2001),” with a dash of Stanley Kubrick’s “The Killing (1956)” thrown in. Channing Tatum, as Jimmy, leads a diverse ensemble cast in a heist caper that begins slowly and picks up steam as we are introduced to Jimmy’s robbery team, along with their individual quirks and foibles. The boys’ free-spirited sister and getaway driver, Mellie is, often, the brains in the gang. Katie Holmes, Connie’s disappointed ex, Bobbie Jo, wants to stop him from seeing his daughter, Sadie (Farrah Mackenzie). But, stealing the show is Daniel Craig as incarcerated safe cracker, Joe Bang, and his born-again brothers, Sam (Brian Gleeson) and Fish (Jack Quaid). There are too may others to mention but all are effective in their characters. Steven Soderbergh, with his mysterious screenwriter Rebecca Blunt (reportedly the pseudonym of the director), and a great cast have fun in creating a twisty heist thriller with a sense of humor. It is a case where, as the intricate plot unfolds, you invest in their quirky blue collar characters and root for them all.