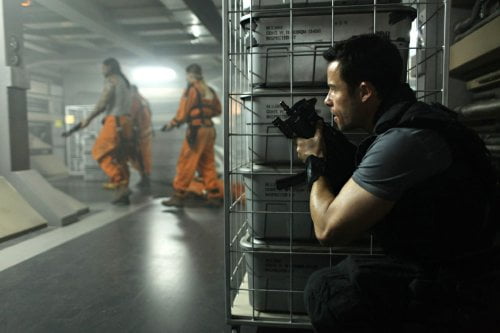 When the president's daughter Emilie Warnock (Maggie Grace, "Taken," TV's 'Lost') is held hostage after a violent riot in the experimental space prison MS One, he sends Agent Snow (Guy Pearce, "Animal Kingdom," HBO's 'Mildred Pierce'), a man seeking his own freedom, in to rescue her in "Lockout."

Cowriter/directors Stephen St. Leger & James Mather make their feature debut courtesy of French producer/director Luc Besson who claims an 'original idea' credit here for what is a clearly unoriginal mashup of genre films, most notably "Escape from New York," "Demolition Man" and "Die Hard." The filmmakers were lauded for their short, 'Prey Alone,' but what appears on the big screen is dreary looking cheese, complete with a CGI motorcycle chase that looks like it was literally ripped from a videogame. The film only works at all because of its cast, most notably Guy Pearce, having a ball as an 80's era action hero tossing out one liners. Is Pearce about to follow the Liam Neeson guide to career makeovers? The film begins with a very muddled scene involving Snow being set up for the killing of another agent, his friend Frank, but it's impossible to tell how or why. He's grilled by Langral (Peter Stormare, "Fargo," "Henry's Crime"), who insists he saw Snow shoot Frank with his own eyes, but secretly provides a name, Mace, to Shaw (Lennie James, HBO's 'Hung') a friendly insider, to assist in finding revealing evidence. Meanwhile, Emilie interviews prisoner Hydell (Joseph Gilgun, "Harry Brown") to try and determine if the process used to sedate them in long term states of unconsciousness is causing rumored side effects, but Hydell's got a hidden gun and quickly overpowers her guard, Hock (Jacky Ido, "Inglourious Basterds"). How an inmate could have smuggled a weapon in his boot into a room with the president's daughter in such a highly secured environment is just one of many bothersome details the filmmakers never bother to address. It just is, like the monitor to communicate with the control room conveniently located in an unlikely place when the script demands (wouldn't hand held devices make more sense in the future?) or the way Hydell's brother Alex (Vincent Regan, "300," "Clash of the Titans") has already taken charge of the entire station's uprising the first time we see him (the two brothers have heavy Scottish accents, an odd choice from Irish/French filmmakers). Almost everything about the execution appears random except for the romantic comedy throughline that exists between the cocky hero and his reluctant rescue. Who would have expected to see Guy Pearce go the wisecracking action hero route a la Bruce Willis? (He even has an African American 'man on the ground' working outside the rest of his organization.) The guy's just really enjoyable to watch in this, though, a compact tough guy with just enough upper arm musculature and more than enough attitude to make it work. Grace holds her own as the woman who turns out to be a lot tougher than Snow gives her credit for. Stormare serves enjoyable ham. As the bad guy brothers, Regan's cool collectedness is frustrated by Gilgun's hair trigger derangement. Tim Plester ("Kick-Ass") actually evokes something approaching sorrow as Mace, the guy Snow finds hoping for redemption but discovers reduced to dementia on MS One. "Lockout" isn't a good movie, but it's entertaining. It's the kind of movie you'll come across channel surfing and decide to linger with for a while.