Lo and Behold, Reveries of the Connected World 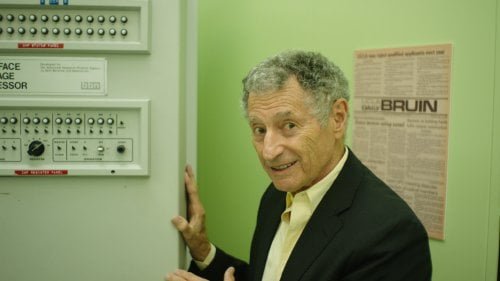 It seems like the Internet has been around forever. Our lives revolve around it and, for many, it rules (and, sometimes, ruins) their lives. But, this whole, massive World Wide Web had its humble start in 1969 when two computers, one at Stanford Univerit and the other at UCLA, communicated just two letters between each other - LO. Werner Herzog tells the story from those not so early beginnings to the present and into the future in “Lo and Behold, Reveries of the Connected World.”

In October, 1969, at UCLA, a computer scientist was on the phone with a colleague at Stanford to get verbal confirmation that the letters he was typing were appearing at the other end. 'LOG' was supposed to be the first transmission, but Stanford's end crashed before the 'G' arrived, something Professor Leonard Kleinrock finds most fitting, as 'Lo' was the greeting to a new world. Werner Herzog ("Fitzcarraldo," "Grizzly Man") begins here before branching out into an essay on various aspects of the Internet in "Lo and Behold, Reveries of the Connected World." Herzog immediately puts his signature stamp on his latest, his commentary as Kleinrock heads down a hall 'The corridors here look repulsive...' This isn't some soup to nuts documentary on how the Internet came into being and developed as much as it is Herzog's curiosity leading him to various technological marvels - and pitfalls - of the Internet age. After some initial history with Kleinrock and DARPA's Vint Cerf and Bob Kahan (that first machine Kleinrock shows us is a Bolt Beranek and Newman IMP or Interface Message Processor, a nostalgic bit of history for this critic, who worked at BBN for twenty-five years beginning in 1978, using email and dial-up modems on the old ARPAnet), Herzog begins his reveries. As we're shown an old ARPAnet 'phone book,' listing all the Internet users of the day, Werner surmises that the same thing today would be 72 miles thick, that the data passing through the Internet in one day now, if burned to CD, would stack all the way to Mars and back. He visits Ted Nelson, the man who had a revelation about interconnectedness at the age of five when he trailed his hand in the water from a boat. Nelson gives us a very good idea of the type of minds behind the Internet, almost akin to space travelers. Nelson's concept of hypertext, a term he coined, were elegant, but like Beta to VHS, were left behind in the wake of Tim Berners-Lee's creation of the world wide web (it's most amusing to watch Nelson go off on a pet peeve about the changed meaning behind his idea of 'cut and paste'). The surprising democracy of the web is revealed in the telling of Carnegie Mellon's EteRNA game, where users solve puzzles relating to the folding of molecules, users who included everyone from kids to non-technical seniors. A Stanford professor was amazed when his class was offered online, 210,000 signed up, and none of the top 412, the size of his original class, were Stanford students. From robotic soccer to self driving cars, Herzog explores many wonders, but he also goes to darker places. The Catsouras family suffered horribly as one of the early victims of the web when graphic photos of their daughter's decapitation in a car crash got online and began arriving in their inboxes with horrible messages. There are people who suffer from sensitivity to electromagnetic transmissions (hello 'Better Call Saul's' Chuck McGill!) and those who become addicted to the web (the notorious South Korean case of the parents who let their baby starve while out playing a game in which they nurtured a child is offered, as well as gamers who wear diapers so as not to disrupt their play). We hear about the mid-nineteenth century Carrington Event, a solar flare so large it caused telegraph paper to combust, and consider the looming, next event in a time when even home appliances rely on the net. Perhaps most fascinating is the time Herzog spends with hacker celeb Kevin Mitnick, who gives a hair raising example of how people, not technology, are the weakest link in security (spam and viruses weren't even a consideration back in the early days). Herzog, who doesn't carry a cell phone nor use social media, proves his own technological creativity when he suggests developing an app to 'read' women's signals to two senior techheads obviously thrilled by the idea (he also volunteers to go to Mars). "Lo and Behold, Reveries of the Connected World" jumps about following Herzog's thought train. It's far from all encompassing, but delightful in its playfulness. And 'The corridors here look repulsive' may be my favorite movie line of 2016. (Herzog fans will note the use of 'Das Rheingold,' previously used in his "Nosferatu.") Grade:

I love it when Werner Herzog makes a documentary (and his fiction films are no slouch either). The filmmaker always chooses fascinating subjects and issues that include “Lessons of Darkness (1992),” about the Kuwaiti oil field fires following the first Iraq war, “My Best Fiend (1999),” about his muse Klaus Kinski, and “Grizzly Man (2005)” about the life and death grizzly bear activist Timothy Treadwell. “Lo and Behold” is another such interesting project examining the connected world. Werner’s latest is, personally, near and dear to my heart. It begins, as I said, with the introduction of the first inter-computer communication. The machine on display, a ruggedized Honeywell 516 computer at Stanford University called a packet switch, was one of the nodes on the US government’s Advance Research Projects Agency (ARPA) network – the world’s first. I was one of the operators who were responsible to monitor and support these machines and the network way back in the early 1970s, thus the near and dear. It was a kick for me to see the faces and hear the voices of the pioneering founders of the Internet, some of whom I actually met. Herzog divides up his history of modern communications into ten chapters with such subjects as, I. The Early Days, III. The Dark Side, IV. Life without the Internet and VII. The Net on Mars. He discusses the birth of “going viral” and the problems that can cause. He also talks about Internet addiction and tells the story of a husband and wife so obsessed with gaming that they let their infant child die of starvation. Herzog ends his informative and entertaining tome with “The wonderful thing about the future is we don’t know where it will go.” For many, “Lo and Behold” will be an interesting history lesson and look into the future of the Internet, including the colonization of Mars. For me, it was a nostalgic walk through my past life and memories and I give Herzog and A for that. But,