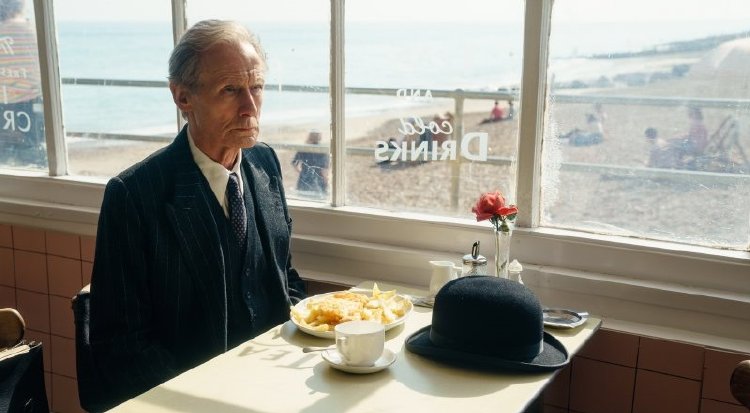 In 1953 post-war London, Williams (Bill Nighy) is a respected bureaucrat running a small public works office.  Widowed for decades, Williams leads a life mummified in reserve until a dire medical diagnosis forces him to face his own mortality.  He does the unthinkable, not showing up for work to mess about at a seaside resort then returning to London and striking up a friendship with Margaret Harris (Aimee Lou Wood, Netflix's 'Sex Education'), the young woman who just left his employ to pursue her ambitions.  It is Margaret who convinces her former boss to return to the office where pushing a playground project out of its red tape mire becomes the very definition of “Living.”

It was during a dinner with fellow 50’s film buff producer Stephen Woolley that writer Kazuo Ishiguro ("The Remains of the Day") decided he wanted to adapt Akira Kurosawa's "Ikiru" setting it during the same post-war period in another country known for its reserve, England.  Luckily Bill Nighy stopped by to say hello, perfect casting for their lead, and a film project was launched, “Moffie’s” Oliver Hermanus brought on board to direct the production.

Director of Photography Jamie Ramsay ("Moffie") envelops us in nostalgia from the outset, his academy ratio introduction to London looking like a 1950’s travelogue film, rich in reds and double deckers.  It is not Williams who we meet first but Peter Wakeling (Alex Sharp, "How to Talk to Girls at Parties"), a new young employee outfitted in requisite suit (its blue color draws stares up and down, one measure of costume designer Sandy Powell’s contributions) and derby trying to make jolly small talk at the train station with his coworkers before being cautioned by Mr. Rusbridger (Hubert Burton, "Testament of Youth") against ‘too much fun and laughter.’  Wakeling will be our entrance into Williams’s ‘after,’ a hopeful break from stodgy propriety.

In the office (production designer Helen Scott ("Lovers Rock") secured County Hall, the actual seat of local government during this time period), Williams sits facing his workers, arranged in parallel rows before him, their paper ‘skyscrapers’ badges of honor.  On this day, he will formally deputize his right hand, Mr. Middleton (Adrian Rawlins, "Harry Potter and the Goblet of Fire"), as he has to leave early.  While he’s at the doctor’s getting bad news, Miss Harris, the lone female in the group, will be asked if it is true she is leaving and Wakeling will sing the bureaucratic blues after attempting to shepherd three women petitioning to turn a blighted block into a playground and ending up back where he started.

We’ll check in back at the office occasionally, where Williams’ absence is both scandalous and barely commented upon, but “Living” is all about Williams’ realization that he has let his life slip away into meaningless monotony and his journey back.  His first inclination is to go on holiday and enjoy himself a little.  Eating breakfast at a seaside café, he meets Sutherland (Tom Burke, "The Souvenir Part 1"), a writer of potboilers that support his drunken, bawdy lifestyle.  Unfortunately this sequence is as unfulfilling for us as it is for Williams, who soon realizes its shallow pleasures bring little joy, but who does emerge from the experience with a fedora replacing his bowler.

The film comes to life when Williams returns to London and begins inviting Miss Harris out for lunch at Fortnum & Mason and Cary Grant movies, the young woman surprised to find herself enjoying his company but distressed that he is shirking his responsibilities.  It will be Wakeling’s stalled playground project that inspires Williams, the young man in tow as Middleton, Rusbridger and Hart (Oliver Chris, 2020's "Emma.") feel the earth shift beneath their feet.

Nighy never overplays, his character’s reserved behavior and quiet speech patterns barely changing.  Instead, the actor ups his physical energy level just as Williams’ health begins to drain it.  Nighy gives us a subtle attitudinal shift, the interests Williams always had drawn out through friendship with a vibrant younger woman.  Ishiguro has added a little romance between Harris and Wakeling, hope for the future forged by Williams nicely shaded in the background by Wood and Sharp.  And Sharp, accompanied by Thomas Coombes’ police constable, caps the film off in snow-laden poignancy, Williams’ presence felt in an empty swing.