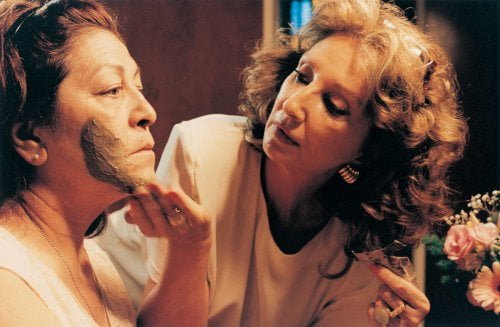 Beba Pujol (Norma Aleandro, "The Official Story," "Son of the Bride") is a proud, once wealthy woman struggling to accept the downturn of her financial situation in an economically depressed Buenos Aires. The whisky she drinks too much of only temporarily masks the problem. Her real support comes from the endurance of her thirty year relationship with her "Live In Maid."

Writer/director Jorge Gaggero has created a complex, emotionally true, two handed character study with riveting performances from the much heralded and Oscar nominated veteran Aleandro and first timer Norma Argentina as Dora, the stoic maid. The contrast between the always dignified Dora, who is beginning to chafe against her unpaid wages, and Beba, crumbling inside while trying to maintain her own perceived persona exemplifies the changes in relationships when the power base shifts. Dora, whose expression rarely flickers, goes about her daily grind, which includes surreptitiously filling imported whisky bottles with the local stuff, yet becomes more vocal about her wages. Beba makes elaborate excuses, then, hidden behind giant sunglasses, tries to pawn a teapot. A new job selling cosmetic facial masques provides initial hope, but her desperation becomes more apparent when her sales pitches fall on folks much like herself. A low point finds her trading product for a cheap meal in a Chinese restaurant. Beba is further alienated by her family - the daughter, Guillermina, who goes to school in Madrid and times her telephone calls when only Dora will be home, and the ex-husband Víctor (Marcos Mundstock), who is kind but firm about his inability to support her. (In fact, a family photo shows a young Guillermina standing with her hands placed on the seated shoulders of Victor and Dora, which, when combined with failings learned later about Dora's character, make one question just whose daughter she is.) Dora eventually decides she has no option but to leave her unpaid position and so heads to the country where she has been building a small home with the boyfriend her boss disparages, Miguel (Raul Panguinao) (Beba prefers her own building's janitor, Luisito, for Dora, but her motives seem transparent. Gaggero's writing is not so obvious, however.) The seven months wages she has finally received (Victor had convinced Beba to sell her cherished gold earrings) will buy the 'classy' flooring she covets. But Dora's life without Beba is not what she anticipated and when Beba finally moves to humbler lodging in the city, a kindly act suggests a new situation for them both. From the rooms and spaces which house the two women to the slow unraveling of their history together, "Live In Maid" is a wonder of economic storytelling. In a mere 83 minutes, Gaggero not only unfurls two complete lives before us but shows us the intricate ties that bind them. What a find in Norma Argentina, whose strength of character is shown in her bearing, who conveys a range of emotion with a facial expression that never changes (one which is Gaggero plays with comic subtlety when Beba's application of mud masque makes Dora look like a native warrior), except for the hint of a smile as she dances with Miguel. Aleandro is a coil of jittery anxiety, a somewhat unlikable woman at first who makes us warm up to her as she tries what she can to survive. That she holds up charade to the end is endearing in Aleandro's hands. "Live In Maid" is proof that the simple stuff of life can make for great drama in the right hands. Jorge Gaggero's small film has great heart and humanity without ever slipping into sentimentality.

Locally shot in New Hampshire (famous for its Live Free or Die motto on that state’s license plates) by newcomer feature helmers Gregg Kavet and Andy Robin, the film focuses on the petty exploits of Rugged. The big crime wannabe makes his living with his rebate coupon scams and selling supposedly “hot” stereo speakers. When he meets his high school friend, Jeff, the small-time crook persuades his not-to-bright buddy that he is a criminal kingpin and security expert. Rugged’s plan is to take over Jeff’s U-Lock business and live the life of Riley. Cheryl sees things different. Things go wrong with Rugged’s plans for greatness when he is picked on by a local tough, Gazaniga (Ebon Moss-Bachrach), at a neighborhood watering hole. Embarrassed by the encounter, Rugged plans revenge by tainting the guy’s well with DOT-3 brake fluid. Thinking that this will just make his foe very sick, he is shocked to learn the guy has died (but from bad clams, not automotive fluid poisoning). This begins a crime comedy of errors as Rugged tries to cover his tracks – he paid for the brake fluid with a rebate check emblazoned with his name and address. He plans to rob the store where he bought the DOT-3 to get back the incriminating check and the crime sinks him deeper into a hole. This crime light comedy has a few laughs was Rugged proves, time and again, that he is a legend in his own mind and nothing more. Aaron Stanford, best known for his role as Pyro in the “X-Men” franchise, impressed me more as the eldest son in the family drama “Winter Solstice. His Rugged reminded me of a guy I knew in my younger days, also named John, who drove a beat up VW Beetle (Rugged drives an equally beat up pick up truck) and acted like was the coolest, toughest thing since Al Capone. He wasn’t and neither is Rugged but Stanford gives his character a believable feel. The supporting cast is topped by an amusing perf by Paul Schneider as the naïve Jeff. Schneider, who debuted in the solid little indie film, “George Washington (2000),” is most amusing as the without-a-clue character, Lagrand. Michael Rapaport plays it straight as Lt. Putney, a man with a terrible secret. Kevin Dunn is solid as Putney’s boss but the usually charismatic Zooey Deschanel just goes through her paces. The rest of the cast is sprinkle with sometimes amusing characters. Live Free or Die” may have some regional appeal for New Englanders with its New Hampshire locales – I used to shop at the Lambert’s Hardware store that is a central location in the film – but national attraction may be sketchy at best. It is a mildly entertaining little flick but is a slight effort.