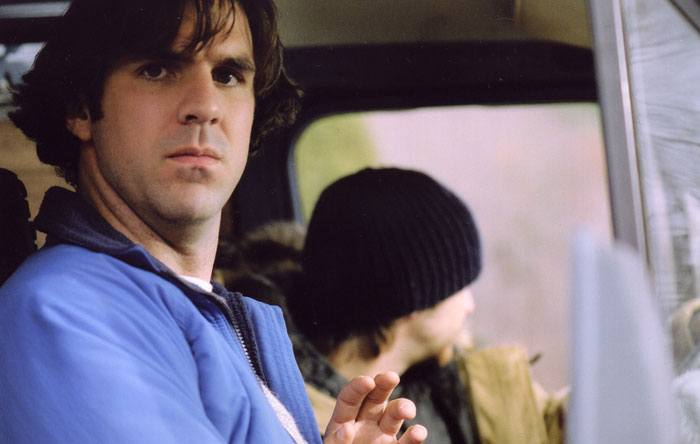 Wannabe criminal John “Rugged “ Rudgate (Aaron Stanford) thinks he is a genius at crime but the tough acting guy is all talk and no action. He convinces an old friend, Jeff Lagrand (Paul Schneider), inheritor of a lucrative self-storage business with his sister Cheryl (Zooey Deschanel), to make him a partner in the business, hoping to finally make it big. But, his plans at making big bucks will be thwarted by a local cop (Michael Rapaport) in “Live Free or Die.”

Seinfield writers and former New Englanders Gregg Kavet and Andy Robin celebrate the fringe of New Hampshire losers in the form of John "Rugged" Rudgate (Aaron Stanford, "Tadpole," 2006's "The Hills Have Eyes"), a self-proclaimed hardened criminal who makes a living by forging rebates and duping the customers who buy speakers from the back of his decrepit van into thinking they've gotten a 'hot' deal. Only his younger former clam shack colleague Marcus (Peter Anthony Tambakis, "Igby Goes Down") is impressed with Rugged's showboating claims, but even his is disillusioned when the thousands promised him for dealing stolen certificates from the Andover Tractor Trailer Trucking School turns into sixty bucks because Rugged is intimidated by the big guys who buy them. Until, that is, Rugged runs into old schoolmate Lagrand (Paul Schneider, "All the Real Girls," "The Family Stone"), a slow-witted dweeb who has just inherited his dad's storage rental business along with his much savvier sister (Schneider's "Real Girls" costar Zooey Deschanel). Lagrand is eager to impress Rugged and tries to figure out how to work around Cheryl's refusal to stake his new buddy in the business, but Rugged's efforts to appear tough draw the attentions of the town's Chief and his disturbed deputy (Michael Rappaport, TV's 'The War at Home'). "Live Free or Die" is a lightweight film, sort of a less gruesome, slacker take on 2005's "The Ice Harvest" crossed with a common man's "Garden State," that is elevated by a cast that maintains interest when the plot lags. Kavet and Robin provide nice little dustings of local flavor and quirky behavior, but their story starts to sputter and stall at its mid point. Aaron Stanford does a great job as the weasely braggart, always promoting himself to whoever will listen while looking over his shoulder for those who know better. It is Paul Schneider who is the film's real shining star, though, a clueless doofus housed in utter awkwardness, whose blank incomprehension is hilarious. Other supporting players lend color, particularly Kevin Dunn ("The Black Dahlia," "Gridiron Gang") as Rutland's Chief and Stanford's "Winter Solstice" costar Ebon Moss-Bachrach as a more intimidating version of his own character. Zooey Deschanel is wasted with a thoroughly humorless role and Judah Friedlander's ("Feast") ugly hardware store owner, while initially amusing, becomes wearying, at least until the reprieve of a last act punchline.

Locally shot in New Hampshire (famous for its Live Free or Die motto on that state’s license plates) by newcomer feature helmers Gregg Kavet and Andy Robin, the film focuses on the petty exploits of Rugged. The big crime wannabe makes his living with his rebate coupon scams and selling supposedly “hot” stereo speakers. When he meets his high school friend, Jeff, the small-time crook persuades his not-to-bright buddy that he is a criminal kingpin and security expert. Rugged’s plan is to take over Jeff’s U-Lock business and live the life of Riley. Cheryl sees things different. Things go wrong with Rugged’s plans for greatness when he is picked on by a local tough, Gazaniga (Ebon Moss-Bachrach), at a neighborhood watering hole. Embarrassed by the encounter, Rugged plans revenge by tainting the guy’s well with DOT-3 brake fluid. Thinking that this will just make his foe very sick, he is shocked to learn the guy has died (but from bad clams, not automotive fluid poisoning). This begins a crime comedy of errors as Rugged tries to cover his tracks – he paid for the brake fluid with a rebate check emblazoned with his name and address. He plans to rob the store where he bought the DOT-3 to get back the incriminating check and the crime sinks him deeper into a hole. This crime light comedy has a few laughs was Rugged proves, time and again, that he is a legend in his own mind and nothing more. Aaron Stanford, best known for his role as Pyro in the “X-Men” franchise, impressed me more as the eldest son in the family drama “Winter Solstice. His Rugged reminded me of a guy I knew in my younger days, also named John, who drove a beat up VW Beetle (Rugged drives an equally beat up pick up truck) and acted like was the coolest, toughest thing since Al Capone. He wasn’t and neither is Rugged but Stanford gives his character a believable feel. The supporting cast is topped by an amusing perf by Paul Schneider as the naïve Jeff. Schneider, who debuted in the solid little indie film, “George Washington (2000),” is most amusing as the without-a-clue character, Lagrand. Michael Rapaport plays it straight as Lt. Putney, a man with a terrible secret. Kevin Dunn is solid as Putney’s boss but the usually charismatic Zooey Deschanel just goes through her paces. The rest of the cast is sprinkle with sometimes amusing characters. Live Free or Die” may have some regional appeal for New Englanders with its New Hampshire locales – I used to shop at the Lambert’s Hardware store that is a central location in the film – but national attraction may be sketchy at best. It is a mildly entertaining little flick but is a slight effort.