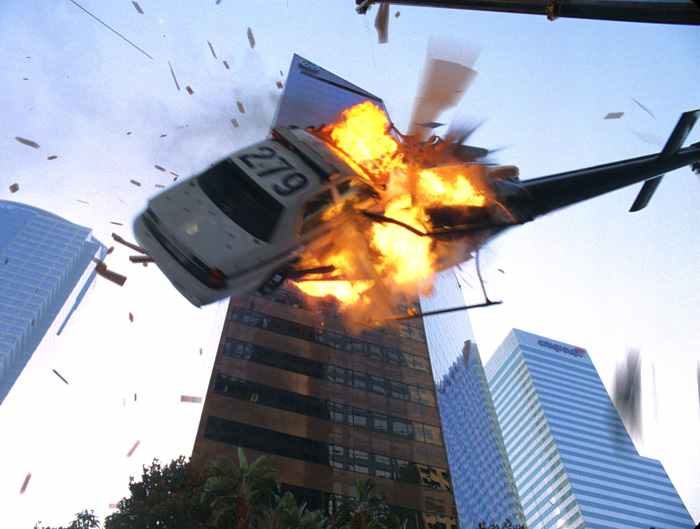 New York City Detective John McClane (Bruce Willis) is disgruntled with his low-key Fourth of July assignment to bring in young computer hacker, Matt Farrell (Justin Long, "Accepted," "Idiocracy"), for FBI questioning, but when the nation's infrastructure begins to shut down, his detainee proves invaluable as McClane matches wits with a digital terrorist and tries to "Live Free or Die Hard."

Summer 2007 so far has been one disappointing tent pole sequel after another, but suddenly one comes out of mothballs and really delivers. "Live Free or Die Hard" isn't a great, classic actioner like the first of the series, but it doesn't take itself too seriously and it's entertaining as hell. The old Willis charisma hasn't faded even if McClane's been a bit muzzled by a PG-13 rating and the stunts crafted by Brad Martin ("Underworld: Evolution," "Spider-Man 3") are truly astounding (and refreshingly restrained in the CGI department) even when we're laughing at how over the top they go. New to the series director Len Wiseman ("Underground") keeps things well paced and gets solid performances from a cast that includes Timothy Olyphant ("The Girl Next Door," HBO's "Deadwood") as a sleekly arrogant villain and Justin Long ("The Break-Up," "Accepted") as an appealing geek who has the unlikey looks of Keanu Reeves crossed with David Schwimmer. Seeing as how it has been twelve years since the last installment, McClane's prickly but strong female relationship now exists between him and his college age daughter, Lucy and as played by Mary Elizabeth Winstead ("Bobby," "Grindhouse") she's a perfect mix of her defiant mother Holly (whom we now learn is divorced from John) and her dad. John's over protective urges embarrass his daughter when he catches her making out with an even more uncomfortable date. A few minutes later, McClane's sussing out Farrell when the kid's apartment gets strafed. It's five heavily armed bad guys against a handicapped two, but John's instincts are still sharp even if he is 'a Timex watch in a digital world' and Wiseman builds a neatly escalating set piece out of the battle. Back at FBI HQ, Agent Bowman (Cliff Curtis, "The Fountain," "Fracture") is reacting to the beginning of what Matt will I.D. as a 'Fire Sale,' a theoretical terrorist ploy to bring a country to a halt by first taking out its transportation, then its economical infrastructure and finally its utilities - 'everything must go.' When John expresses doubt, Matt reminds him that it 'took FEMA five days to get water to the Superdome.' Sobered, McClane sets out with the hacker who is both a resource and a target, seeing as how Matt's unsuspecting role in the terrorists' wide scale plan has put him on their hit list (scores of other dupes have been taken out by the downloading of a virus that turned their PCs into bombs - say what?). Getting from point A to point B has never been trickier as McClane and his charge take on armed helicopters, a pitch black, high-speed traffic trap and the seemingly indestructible Mai Lihn (Maggie Q, "Mission: Impossible III "), Gabriel's right-hand girl. If the stunts get a little out of hand when Willis starts barebacking a Harrier jet after it shoots an elevated highway out from under him and Kevin Smith as a mouthy hacker smacks of stunt casting, things come full circle for a resolution that neatly mirrors that opening scene with McClane and his daughter. Yippee-kay-yae - this is what summer movies should be all about.