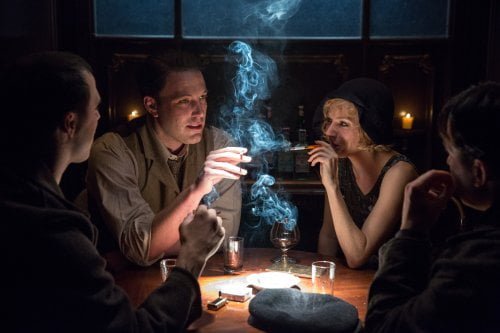 Joe Coughlin (Ben Affleck), during the Great War, “went in a soldier and came out an outlaw.” He started this outlaw life as a petty criminal with his friends, but Joe was smart and ambitious. It was the Prohibition era and he quickly moved up the mob ladder to become the number one illegal rum runner on the eastern seaboard in “Live by Night.”

When Joe Coughlin (Ben Affleck) robs a poker game it turns out to be a life changing event. He meets Emma Gould (Sienna Miller), the woman he believes is the love of his life, but the reason she's there is a problem. She's the girlfriend of notorious gangster Albert White (Robert Glenister, "Creation") and the goons Joe has robbed belong to him. Going for one big score before running away with Emma, Joe runs into more trouble when two cops are killed. With the help of his father, Boston Police Superintendent Thomas Coughlin (Brendan Gleeson, "Calvary"), Joe gets off lightly, signs his allegiance to White's enemy Maso Pescatore (Remo Girone, "Heaven") and heads to Florida to run rum and "Live by Night." With his second adaptation of a Dennis Lehane novel, writer/director Ben Affleck ("Argo") falters. The movie isn't bad, per se, so much as inert, themes which were shaky in Lehane's original text made murkier. The novel posited that successful fathers spawn sons who don't live up to their legacies, yet put forth its central character (19 in the book) as someone trying to live right while engaging in criminal activity, up to and including murder. Joe is almost a saint who sins against his better nature, an outlaw who builds an empire without the ruthlessness displayed by his mentors (including his own father). If the film plays, as it did to me, as one full season of 'Boardwalk Empire' crammed into two hours, note that Lehane was a writer for the HBO series. Been there, done that. The adaptation leaves out some of the book's more involving passages, like Joe's time spent in prison and the blowing up of a naval ship, instead concentrating on the woman, presumed dead, loved by two men, and the two women who shape Joe's following years. Graciela (Zoe Saldana, "Guardians of the Galaxy"), the black woman Joe falls in love and settles down with, is a composite of two characters in the book, here the sister and partner of Esteban Suarez (R&B singer Miguel J. Pimentel), the duo who import Tampa's sugar and molasses from their homeland, Cuba. Joe makes a pact with them to cut White out of their distribution in return for stealing guns for the Cuban revolution of 1933. Joe also comes to an agreement with Tampa's police Chief Figgis (Chris Cooper, "The Town") to keep his operation in the black and Hispanic region of town. Trouble brews when businessmen in the KKK begin to assault his clubs and distributors in the form of Figgis's brother-in-law, RD Pruitt (Matthew Maher, "Gone Baby Gone"), but Joe is victorious. Having expanded Pescatore's business tenfold, the one person Joe refuses to attack is Figgis's daughter, Loretta (a terrific Elle Fanning), a black and white representation of Joe's moral imbalance. After a sordid experience in Hollywood she's returned to her father via Joe's connections (a move that earns Figgis's hatred for Joe's affiliation with the men who degraded his daughter) and made to undergo repentance until she emerges a tent revival evangelist who vigorously decries Joe's plans to open a casino. This draws Pescatore's attention. The film's period production cannot be faulted. Art direction, costume and particularly director of photography Robert Richardson's ("Inglourious Basterds") work, which makes us feel Boston's cold and Tampa's heat, are first rate. But Affleck's adaptation weakens Lehane's story instead of strengthening it. A subplot involving loyalty and Joe's best friend Dion Bartolo (Chris Messina, "Argo") fades into the woodwork and the film would have been much better served had it ended, like the book, on Chief Figgis (Affleck offers us two more concluding sequences, blunting the impact). His decision to cast himself instead of a younger actor was also ill advised, a young man's confused morality more convincing than one twice his age. The film's best scene is due to Fanning, Loretta discussing sin with Joe in a cafe. The film also stars Affleck regular Titus Welliver and "Blue Jasmine's" Max Casella as Digger Pescatore. Grade:

Ben Affleck produces, directs, adapts the Dennis Lehane book and stars in the author’s first “crime novel” about the rise and falls of a young outlaw who, because of his chosen path in life, becomes the thing he vowed never to be – a gangster. One glaring difference from the source material is the character, Joe. In the original story, we meet him at age 19, a wet behind the ears but clear sighted mobster-in-the-making, despite how he thinks himself, and follow him through the years of the Prohibition – about a decade. Ben Affleck does not look like a twenty-something and this colors the character in a different way than a younger actor in the role, something I would prefer. I do not want to go into a synopsis of the Lehane story. Affleck adheres to the framing of the novel, omitting certain extended sequences from the book, which, it turns out, prove important to the film story but are excluded in the script. The result is a rags to riches tale during the Roaring Twenties that, while set much of the time in sultry Florida and Cuba, does not cover any new ground for the genre. The players are a talented collection of veteran character actors whose faces, if not names, you will recognize and they flesh out the background setting. “Live by Night” looks good with appropriate costumes, sets and props of the period – I have to check somewhere to see if Joe packs a Savage .32 in the film, as he does in the book. The story, though, feels too sparse, leaving me unsatisfied.