Little Nicholas – Happy As Can Be 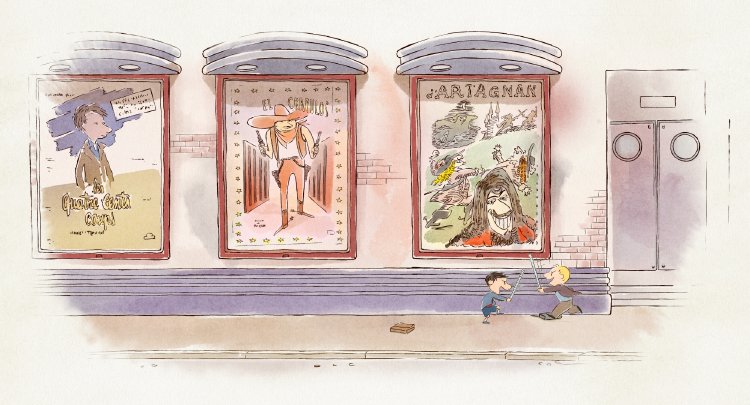 Jean-Jacques Sempé (voice of Laurent Lafitte) worked in unskilled jobs, his comical drawings a hobby that made his friends laugh.  When a local paper agreed to publish them, Sempé joined the Army, his only means of getting to Paris, but was turned down everywhere until the 22 year-old met the more established 27 year-old writer René Goscinny (voice of Alain Chabat), who not only encouraged him, but provided the stories that brought Sempé’s drawings to life in a series of children’s books.  Michel Fessler and Anne Goscinny, adapting the work of René Goscinny, tell the story of their friendship intertwined with their work about childhood in 1950’s Paris in “Little Nicholas – Happy As Can Be.”

Directors Amandine Fredon and Benjamin Massoubre and their animators present their story in the most delightful way, full screen, brightly colored animations depicting the ‘real’ world of the artist and author segueing into animated, pastel depictions of Petit Nicolas, negative space surrounding an oval frame.  Little Nicholas (the name is spelled with an ‘h’ in English) also jumps off the page to interact with Sempé and Goscinny in their individual work spaces, the artist in a typical Parisian garret, the author at a manual typewriter.  In a scant 82 minute running time, “Little Nicholas – Happy As Can Be” entertains with the subject’s exploits while adding the complexity of his creators’ artistic inspiration, collaboration and friendship.

Against a French inflected jazz score, Jean-Jacques races to meet René at Chez Michel.  It’s 1955 and after looking at the young man’s drawings, René begins to shape a story around them, reining in the artist’s extravagant visuals in search of more straightforward, everyday humor.  We are first treated to the arrival of a bulky television set, Maman (voice of Delphine Baril) torturing the delivery man as she considers where to put it.  Nicolas (voice of Simon Faliu) comes more into focus with the arrival of his maternal Nanna, the woman wrecking havoc by spoiling her grandchild while his father (voice of Serge Faliu) is powerless against her influence.  Other stories will see the young lad rejecting, then embracing girls like Louisette (voice of Mila Vincent) and Marie-Edwige (voice of Elisa Bardeau) while his school chums outdo each other showing off.  A day will be spent playing hooky with best friend Alceste (voice of Octave Bossuet).  Groups of young boys erupt into fisticuffs in a cloud which could have been left by Peanuts’ Pigpen in both the schoolyard and away at camp.

Interspersed among these adventures are the animated biographies of Sempé, who early on rues the 1977 death of his old friend, and Goscinny, who led the more worldly life with a father who worked for years in Argentina during his childhood  (Nicolas will pop up to admire the man’s life as a ‘cowboy’) and whose career writing the Asterix books gave him much more fame.  At one point, Goscinny recalls his favorite radio program and we are transported into it along with Nicolas, its bandleader singing ‘Happy As Can Be.’  Sempé and Goscinny reunite one week before the older man’s death, reflecting on their work together.  It is an unusually moving tribute delivered in an unusually creative way.

The hand drawn animation embraces nostalgia, using watercolor not simply as coloration, but as a medium to change a scene from daytime to evening by letting blue paint wash across the scene.  “Little Nicholas – Happy As Can Be” is just delightful on many levels.

In the 1950s, artist Jean-Jacques Sempe met and made friends with writer Rene Goscinny. In 1959, they collaborated on a character invented by Sempe to have some fun. The result is the little guy who would become world famous and live in the hearts of children everywhere as “Little Nicholas - Happy as Can Be.”

Co-directors Amandine Fredon and Benjamin Massoubre pay loving homage to the creators of the long-published Le Petit Nicholas children’s books and do it in a whimsical and entertaining way. The film’s animation team tells the story of how Sempe first created Nicholas and his invitation to Goscinny to collaborate in creating the back story of their titular little boy, all in anime.

Of course, this being an animation about creating an animation, we get to see the process from the POV of the authors as they breathe life into Nicholas, introducing his family and bevy of friends, each with his/her own unique talent or ability. It is a lovely journey into both the lives of the creators and the life of their creation, Nicholas. And, the animators deftly make distinct just whose POV we have – the authors are in full-framed, full color and the Nicholas parts are more ethereal and in lovely pastels.