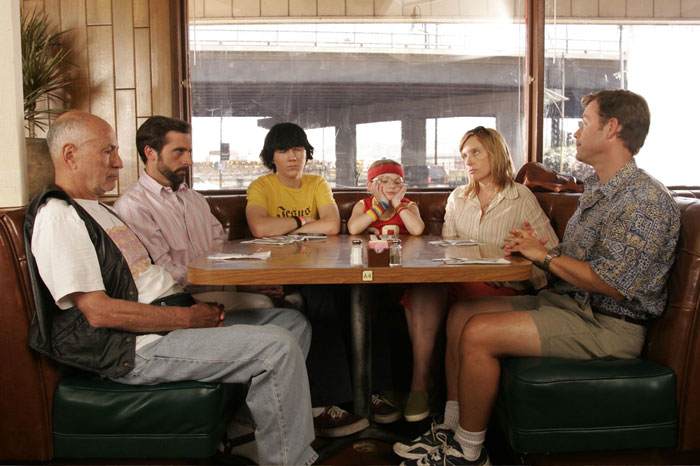 The Hoover family defines dysfunction. Dad Richard's attempt to launch his 9-step program for success is draining the family finances. Mom Sheryl is trying to hold the family together while incorporating her suicidal, gay brother Frank into the mix. Nietzsche worshipping son Dwayne has taken a vow of silence until he can get away by joining the Air Force Academy and grandad has been kicked out of a retirement home for snorting heroin. But everyone will rally round when the youngest family member, Olive, might achieve her dreams by competing in a beauty pageant called "Little Miss Sunshine."

This Sundance and L.A. Film Festival audience pleaser is that Indie brass ring so many try to grab, a solid comedy based on a well worn outline with an exceptional cast and direction that perfectly balances the tonal mismatch of black humor and sentiment. The husband and wife video directing team of Jonathan Dayton and Valerie Faris (MTV's "The Cutting Edge") make their feature debut with Michael Arndt's 'by the numbers plus quirks' screenplay and knock it out of the park. There's little new about the idea of assembling a dysfunctional family and putting them on a road trip, but Arndt sets up his conflicts well, pairing off family members in multiple confrontational and supportive configurations. There is the uptight, but irrepressibly upbeat, motivational speaker Richard (Greg Kinnear, "Bad News Bears," "The Matador"), whom the entire family spins off of, and his wildly unconventional, foul-mouthed, porn loving, heroin snorting dad (Alan Arkin, "Glengarry Glen Ross," "Thirteen Conversations About One Thing"). Richard is always making loud, irritatingly sunny proclamations as his son (Paul Dano, "L.I.E.," "The Ballad of Jack and Rose") quietly glowers and dad's idolization of 'winning' puts him at natural odds with the brother-in-law (Steve Carell, "The 40-Year Old Virgin") who wants to die after being dumped by his gay lover and losing his self-proclaimed title as the country's preeminent Proust scholar to his rival. Dwayne's downbeat world view piques the interest of Frank, who slowly emerges back into life coaching his nephew. Although she is clearly the apple of her parents' eyes, grandad is little Olive's (Abigail Breslin, "Signs," "Keane") biggest supporter, coaching her unseen routine planned for the pageant. Sheryl (Toni Collette, "In Her Shoes") hides her smoking habit and clashes with her husband over the wisdom of gambling their nest egg on his motivational program. She is also the one who figures out how to get Olive to Redondo Beach - the entire family will go (Frank cannot be left alone, etc.) in their old, beat-up VW bus. And so we have the squabbling parents, the resentful teen, the lovable old coot, the problematic uncle and the adorable little girl and along the way there will be run-ins with the law and even the dead body gag from "National Lampoon's Vacation." Of course, everyone will be drastically changed by this trip. The father who is all about winning (and in actuality is a loser) will be the one who wants to withdraw from competition while the mother stands firm in the face of insurmountable odds. Dwayne regains his voice in the face of a cruel blow, but also finds hope in the strangest place - the words and caring of his Uncle Frank. Grandad's philosophies come back to haunt them in very surprising and hilarious ways, particularly in Olive's talent entry, a gag that the entire film is a set up for and which proves a delicious parody of the professional kiddie contestants who make poor, unaware Olive look out of her league, homemade and unpolished. And when the VW's clutch gives out, this group will team together every time it needs starting, pushing it into ignition then individually running towards the door and jumping in one by one. Dayton and Faris skillfully blend parent participation in a scene which is whetting the appetite of a pedophile (Geoff Meed) and manage to make it funny, but clearly they understand the value of the dictum 'casting is everything.' "Little Miss Sunshine" boasts one of the best ensemble casts of the year. Greg Kinnear is ideal as the American Dreamer who cannot believe his program isn't a winner and he makes the draining of his optimism sympathetic even after that very optimism has been overbearingly annoying. Toni Collette gives us another American mom and while she doesn't get the chance to chop comedic as the rest, she grounds the group with heart. The great talent that is Alan Arkin adds yet another classic comedic interpretation to an impressive list ("The In-Laws," "Edward Scissorhands," "So I Married an Axe Murderer," "Slums of Beverly Hills") with the profane, hedonistic grandfather who tells the plump, bespectacled Olive that she is the most beautiful girl in the world. Steve Carell makes a startling entrance, looking utterly devastated, a hollow shell with bandaged wrists. When he mutters that he wants to die we utterly believe him, just as he makes his reemergence real and his gas station run-in with his ex-lover hilarious. Of all the film's pairings, it is Carell's with Dano that is ultimately the most touching and Dano is a revelation here, expressing an array of thoughts with nothing but facial expression. Without a word, Dano makes us realize he is happily acting upon grandad's advice given back when he was unreceptive to it and he also proves a staunch protector of his little sister. Of course the film wouldn't work at all if its heart, Olive, wasn't perfect and Abigail Breslin is, although the script robs her of a clean resolution. Notable in small, supporting roles are Beth Grant ("Donnie Darko") as a beauty pageant martinet, Wallace Langham ("Daddy Day Care") as her opposite assistant and Mary Lynn Rajskub ("Firewall," TV's "24") as a thoroughly amused pageant wrangler. "Little Miss Sunshine" will please crowds who like a bit of titillation and provocation with their quirky family fare. It's an expertly made comedy with a cast firing on all cylinders and a fireworks display of an ending.

The Hoover family is functionally dysfunctional. Dad (Greg Kinnear) is the author of a nine-step program for winners, except he isn’t one. Nietzsche-reading son Dwayne (Paul Dano) has taken a vow of silence until he gets into the Air Force Academy. Gay, Proust-scholar brother-in-law Frank (Steve Carell) is just out of the hospital after a suicide attempt. Grandpa (Alan Arkin) snorts heroin and likes porno. Mom (Toni Collette) secretly smoke cigarettes and their pudgy, nine-year old daughter, Olive (Abigail Breslin), wants to be “Little Miss Sunshine.” As the family sits down to a dinner of take-out chicken, mom tells Olive that there is a message for her on the answering machine. To the little girl’s delight, she learns that the winner of a local beauty pageant has suddenly abdicated her throne and Olive is next in line to take part in the Little Miss Sunshine contest and she has get there before 3:00 the next day. It’s hundreds and hundreds of miles away but the little family band together and jump in dad’s vintage VW bus. They drive off into the sunset to, hopefully for Olive, fame and fortune. Music video directors Jonathan Dayton and Valerie Faris make their feature film debut with a family road trip flick that benefits from an outstanding ensemble cast of characters. The trip to the pageant has the usual obstacles, from a blown clutch and stuck horn to a series of wrong turns, but the stalwart Hoover family press on, even when Death rears its head. The series of misadventures is enriched by the wonderful chemistry between all the players and this makes Little Miss Sunshine” all the more entertaining. Richard (Kinnear), the head of Hoover household, is a motivational speaker whose success has waned over the past few years and he desperately touts his “Refuse to Lose” nine-steps-to-success program. Family matriarch Sheryl (Collette) is concerned over their financial well being and has taken up smoking again. Dwayne drops his vow of silence when he learns that his plans to be a fighter pilot are all for naught. Frank, hit by the double whammy of losing his boyfriend and his grant funding, struggles to make sense about his life in shambles. Of the entire family, only grandpa, who loves doing his toots of smack and has a penchant for profanity, and little Olive appear to have their lives in focus. As the family drives across America, their personal problems take a back seat, so to speak, to the fast-approaching deadline that Olive has to make if she wants to live her dream. The fragmented dysfunctionality of the Hoovers is pushed aside as they all work together to get Olive to the stage on time. The finale, the beauty contest, is a bit creepy with its 9-year-olds-going-on-20 contestants, all smiles and artificial slickness, as they, vie for the coveted title of Little Miss Sunshine. Olive’s dance number, choreographed by irreverent Grandpa is one of the best things in the film as she pushes convention to the shock of most and delight of a few, including the Hoovers. Little Miss Sunshine” could have been a conventional road movie with a chuckle here and there. The exceptional cast, solid directing and a briskly paced story help to raise it to the level of one of the best comedies of the summer.