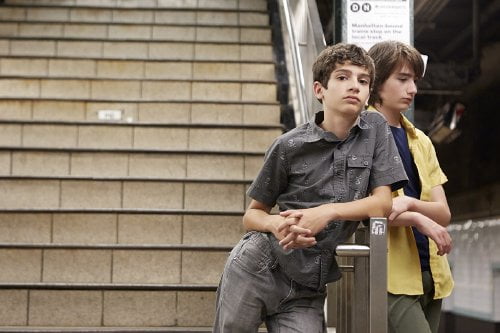 When 13 year-old Jake (Theo Taplitz) moves into his father's childhood home in Brooklyn after the death of his grandfather, he finds an immediate friend in Tony (Michael Barbieri), the son of the Chilean tailor who leases the ground floor shop. But when Jake's struggling actor dad Brian (Greg Kinnear) needs to raise Leonor's (Paulina Garcia, "Gloria," "The 33") rent, the tension created between the two sets of parents trickles into the relationship of their "Little Men."

Cowriter (with his "Love Is Strange" partner Mauricio Zacharias)/director Ira Sachs latest, like his last, looks at how New York real estate affects a male couple, although this time the couple in question haven't really become one yet, at least not romantically. What the film excels at is expressing the sense of powerlessness teens feel when parental decisions adversely affect them, Jake and Tony rebelling here using the silent treatment. Gentrification is another strong theme as the dying out of an older generation affects bonds not appreciated by their progeny. Newcomers Taplitz and Barbieri are behavioral opposites in their roles, the former a quiet introvert teased about his sexual preference, the latter an extrovert with a Guido accent. But both aspire to the arts, Jake as an artist, Tony as an actor and the two easily begin to hang, Tony on skateboard, Jake in rollerblades. Tony begins to share dinners with the Jardines, but when his mom arrives to take him home, she's evasive with Brian and his sister Audrey's (Talia Balsam, AMC's 'Mad Men') attempts to discuss their new situation. Meanwhile Brian's psychotherapist wife Kathy (Jennifer Ehle) makes friendly overtures to Leonor that may or may not be interpreted as genuine, her admiration of one of Leonor's dresses boxing her into a 10% discount offer on a $250 frock. Sachs has sprinkled small minefields within his everyday drama. Tony's aspirations should bind him to Brian but instead they cause a backlash (we see both in action, Brian in an off-off-off Broadway production of 'The Seagull,' Tony in an acting exercise with his teacher (Mauricio Bustamante) that's so entertaining Sachs could have let it run on for fifteen minutes). Brian's windfall causes more stress, not less, when his sister justly points out that while he's benefited, she has not, at least without a major rental gain from Leonor's shop. Leonor sees fit to shove Brian's wife's more stable career in his face even as her own son chooses his path. After Jake's class is instructed to 'Write a poem about someone you love. Make it fun,' Tony turns up beaten, not sharing why (he was defending his friend). The boys' trip to a Manhattan teen dance club doesn't go according to plan as Jake watches Tony chat up a female classmate. The film is steeped in its Brooklyn neighborhood, Manhattan offering varied adventures (cinematographer Óscar Durán's overhead shot of the Jardines' neighborhood with Manhattan rising in the distance makes magical use of that elusive hour). The two newcomers are strong, Barbieri's confident charisma contrasting just so with Taplitz's wistful longing. Kinnear has become a very dependable actor, his dad here struggling with decency in the face of financial reality while keenly feeling his own failures. Garcia makes sharp choices, her Leonor aggressive on the surface, no pushover, while she panics in private ("Love Is Strange's" Alfred Molina plays her lawyer/confidant Hernan). With "Little Men," Sachs once again showcases universal human foibles in a distinct New York City environment. His wrap is provocative, the sadness of inevitable change countered with hope in the unknown future. Grade: