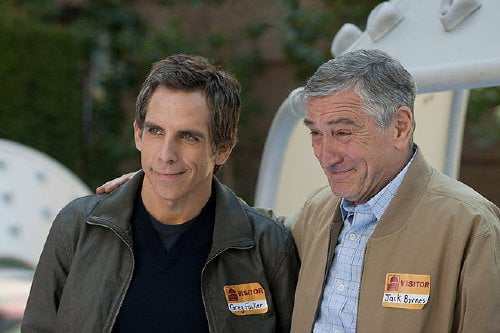 After Greg Focker's (Ben Stiller) brother-in-law Dr. Bob (Tom McCarthy, "2012," "Fair Game") leaves his wife for another woman, Greg finds himself in a surprising position, anointed heir apparent as leader of the Byrnes family, the 'Godfocker,' by his father-in-law Jack (Robert De Niro). Greg, who is also now head of a Chicago hospital's nursing department, takes his new responsibility seriously, but a sexy pharmaceutical salesman and his family history threaten his new relationship with Jack when the in-laws arrive to celebrate the fifth birthday of the "Little Fockers."

Jay Roach isn't exactly a comedy auteur, but somehow the first two of this series, under his steerage, were funny more often than not. But this time around "Fockers' regular" John Hamburg and new writing partner Larry Stuckey's ("Elling") script has that one-too-many-trips-to-the-well feel. It doesn't help that this one has been directed by Paul Weitz ("About a Boy," "Cirque du Freak: The Vampire's Assistant"), whose films have gone from genre fare to interesting indies to unwatchable in the space of ten years and who has not worked out the kinks, groans and dangling subplots here. It's unfortunate that "Little Fockers" is the film that's given us a Keitel/De Niro reunion. First of all, the film has minimal focus on any of the littler Fockers. Samantha Focker (Daisy Tahan, SHOtime's 'Nurse Jackie') is largely overlooked and Henry Focker (Colin Baiocchi, "Couples Retreat") is merely a handy tool to be used for more Greg/Jack conflict (Baiocchi is cute, though, in a young Angus T. Jones kind of way), and even that is minimal. Most of the 'comedy' in "Little Fockers" is driven by the introduction of Andi Garcia (Jessica Alba, "Machete"), a ridiculous, nonsensical character who we are meant to believe would continually throw herself at Greg (and who is the second drug sales rep to inappropriately crash a medical exam in movies this year). The old ex-CIA in Jack comes out again as he tails his son-in-law expecting to catch him cheating on Pam (Teri Polo, who must thank the heavens for this role) just like Dr. Bob. Old pal Kevin Rawley's (Owen Wilson) around again to inadvertently make Greg look bad while openly making plays for his wife. The cast is also joined by Laura Dern ("Blue Velvet," HBO's 'Recount') as a snooty preschool director whose story line is left hanging with no resolution and by Harvey Keitel ("Mean Streets," "Taxi Driver") as Greg's infuriating contractor. Deepak Chopra appears as himself, making smoothies on Kevin's yacht. "Little Fockers" resorts to projectile vomit, spurting blood in a dinner sequence which rivals Dan Ackroyd's SNL Julia Child bit in its extremity and a fart joke all within its first thirty minutes. Only De Niro's self defibrillation and outed spy errands are moderately amusing. Bless Blythe Danner for making the thankless role of Jack's wife interesting, even if by the sames means (sex play!). Dustin Hoffman and Barbra Streisand are shoe-horned in as the senior Fockers and make every one of their few moments count, especially Streisand as sex therapist Roz. If any more is to be mined from the Fockers, the filmmakers should look to them.