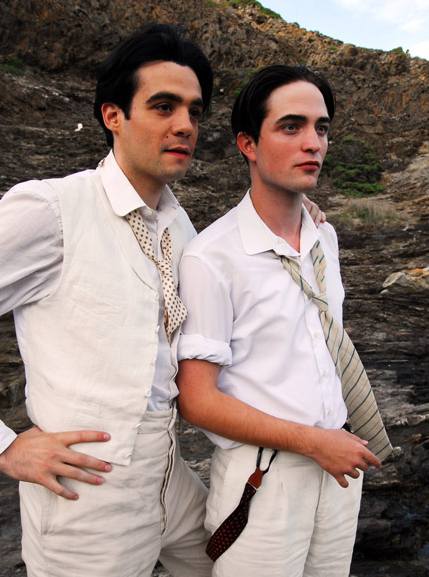 In 1922 Madrid, the shy yet flamboyant Salvador Dalí (Robert Pattinson, "Twilight") arrived at the Residencia de Estudiantes, where he immediately caught the eye of already famed poet Federico García Lorca (Javier Beltrán). Aspiring filmmaker Luis Buñuel (Matthew McNulty, "Control," bearing no resemblance) made up the trio of rebellious hard-partying artists who believed in Surrealism as a means of subversion. But when Luis finds Federico in his room with Salvador after the holidays, he is shocked to realize his friend is in love with the painter whose portrait of Federico was named by the poet himself as "Little Ashes."

Just how calculating can a filmmaker be to have the opening word of his film, 'Twilight,' be the name of the film which catapulted one of his stars into the stratosphere? Director Paul Morrison has specialized in directing films about forbidden love affairs ("Solomon and Gaenor," "Wondrous Oblivion"), but never 'the love that dare not speak its name,' and while his film boasts nice visuals (HD cinematography by Adam Suschitzky), the translation of young Dalí into a homoerotic Vogue model places the actor, rather than the character, front and center. That's too bad, because newcomer Javier Beltrán is quite good as the troubled, passionate and idealistic García Lorca, who is rightfully the central character here, but it's Pattinson who will be the draw and his characterization is mostly shallow, if not the embarrassment stills of him with the Dalí moustache would suggest. Writer Philippa Goslett gives us some patriotic background and home to inform Lorca's character, but nothing on Dalí except a desire to draw attention and be regarded as a genius. Buñuel is only cohesive glue who gives voice to the then strident intolerance of homosexuality. She does touch upon how the trio influenced each other's art (Buñuel only through his short film cowritten with Dalí, "Un Chien Andalou," which the Andalusian García Lorca interpreted as a rebuke). Another imagined trio, that of García Lorca, Dalí and Lorca's virginal friend Magdalena (Marina Gatell), who is used as a Dali substitute in a three-way sex scene, seems merely exploitative. The film begins with Dalí's entrance and what an entrance it is. We see him settling the shaking of a nervous hand, cuffed in the ruffles of a poet shirt, as his car approaches the university, its steps occupied by its tweed suited regiments. A pair of dandified black boots make their appearance, then the camera travels up (its gaze always rapturous upon Robert) to reveal a boy with the face of a lascivious milk maid framed in a long bob topped with an outlandish hat. I did not know that Dalí was, in essence and at least initially, shy and Pattinson does do a good job of indicating that while still being very conscious of image, setting up his room like an intellectual trap to draw in the crowd he has set his sights upon (that Garcia Lorca/Dali attraction was mutual). The 'gay thing' would seem to be the most important aspect of this confluence of Spanish artists, and it is hinted at and flirted around. García Lorca's interest in his friend Magdalena wanes once Dalí is on the scene, although she is the center of their first mention of sex. On a holiday to Cadaqués, the García Lorca writes, Dalí paints, and then the two take a nighttime swim that is shot to suggest water as star-filled sky. A kiss is passionate, but Dalí retires to his room alone. Back at school, after declaring 'No limits!' Dalí initiates sex with Federico, but retreats in a tearful fetal position at the consummate moment. Magdalena visits soon after, seduction on her mind, not noticing Federico's friend crying in the corner, but she continues on, both she and Federico keenly aware of his participatory presence. Imaginative writing for a virginal girl to not only partake in this sordid and humiliating experience, but also be the only one to expose her nether regions (earlier Pattinson does a kind of odd Buffalo Bill routine in the mirror when he is shaping his persona, but that's it). And at this point, Dalí seems to turn on García Lorca, leaving for Paris to join Buñuel. He becomes hugely famous and takes the notorious Russian, Gala (Arly Jover, "Everything Put Together," "Fish in a Barrel") as his wife. It is Magdalena who 'saves' Lorca by encouraging him to live his life the way he feels. Eight years later, he is a famous freedom fighter and Dalí has been rejected by the Surrealists over his Fascist politics but is as famous as ever. A last meeting between the two men is both cruel and illuminating and Lorca's 'disappearance' is handled with real feeling. Technically, Morrison seems more assured at the helm. He studs his film with black and white fantasy and history montages (Lorca imaging Dalí in Paris, the Spanish Civil War) and overlays Spanish and English for the words of his poet. But the film, in the end, is just odd, a curiosity. A good performance from Beltrán countered by a showy impersonation from Pattinson, offset by a weird interpretation of Buñuel who comes off more like a third wheel than a world class film director. "Little Ashes" has moments of interest and moments of indulgence and titillation but not enough insight into the trio of men at its core.