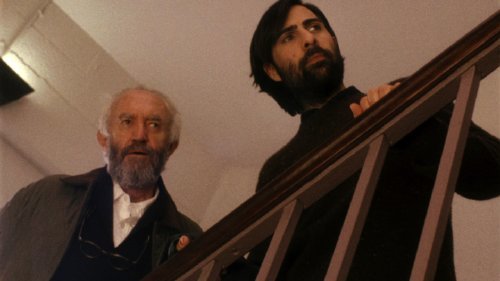 Philip Lewis Friedman's (Jason Schwartzman, "Rushmore") second book, Obidant, is just being published, and his editor's (Daniel London, "It's Kind of a Funny Story") concerned because he's received word that the New York Times didn't like it. But Philip, who's been antagonizing everybody lately, decides against doing any press, instead hitching his post to an idol, Ike Zimmerman (Jonathan Pryce, "Brazil," "Hysteria"), who not only admires his new book but has offered his country home as a writing retreat in "Listen Up Philip."

This hilariously trenchant, literary character study from writer/director Alex Ross Perry ("The Color Wheel") had me practically spitting in surprise as Schwartzman delivers the most self absorbed observations with an almost innocent charm or shrivels another's comment on the vine with a look. He wants to be loved, but is quick to find fault in his women, including live-in girlfriend Ashley's (Elisabeth Moss, AMC's 'Mad Men,' "The One I Love") success as a commercial photographer. When he unwittingly finds himself in Ike Zimmerman, idol worship slowly turns into self realization of a sort, aided by the point of view of Ike's daughter Melanie (Krysten Ritter, TV's 'Don't Trust the B---- in Apartment 23'), who sees things a lot more clearly than he does. After throwing a tantrum in a deli when an ex (Samantha Jacober) is not only late, but fails to appreciate his literary significance, Philip runs roughshod over photo shoot assistant Emily (Dree Hemingway, "Starlet") for having the nerve not to remember him from his first book. Although Ashley's been withdrawn in their relationship, she's not happy to learn he'll be leaving on a journalism assignment to profile a contemporary (Keith Poulson). Needing money, Philip's dashed when that falls through, but there's Ike, recognizing a kindred spirit when Philip has the gall to request an open-ended stay. As the two head out of the city in Ike's old beater side by side on its front bench seat, Philip could be Ike's Mini-Me, both long-haired, bearded and bespectacled. Ike revels in mentoring, all his words of advice (napped with subtle insults) lapped up by Philip. Melanie, whom Philip initially mistakes for a housekeeper given Ike's description of her as 'his girl who takes care of the place, clearly has no use for either. Perry then does something a little different - he heads back to the city to observe life without Philip. Ashley exhibits some strange behavior in choosing a shelter pet (the dogs are too loud, the cat has to be a specific color and is then deemed an 'a**hole'), but she's clearly moving on, enjoying time with her sister (Jess Weixler, "The Disappearance of Eleanor Rigby"). She's none too pleased to find Philip in their apartment as she celebrates a contract with colleagues and throws him out. Perry's engaged Eric Bogosian ("Talk Radio") to narrate much of the proceedings, and Bogosian's academic approach turns Philip into an observed subject (Perry's use of the Academic aspect ratio also has a distancing effect). The documentary approach is also bolstered by Ike's introduction via a montage of book covers bearing titles like 'Madness & Women,' 'The Shrug: An Impassive Novel' and 'The Cinch: An Easy Novel,' all in vintage Philip Roth style typeface. His screenplay delights with zingers, flying fast (Philip's editor to his assistant as he sits down with the novelist - 'Don't hold my calls'). Philip's stilted speech sometimes recalls his Max Fischer character in "Rushmore" - 'You really forced my hand on this' - but more frequently sounds like dialogue to use in his next novel ('Ever since I was a teenager I wanted to fall in love with a French girl'). Philip's downward spiral at the local college where Ike's gotten him a teaching job ('I don't like to use the word teach, I use instruct.') is almost poignant, his disillusionment in Ike thrown into high gear by an immature attempt at wine, women and song. "Listen Up Philip" is a comedic caution on the self destructive inclinations of the ego. Schwartzman walks a fine line, his despicable behavior never quite eroding our sympathies. Perry closes with The Supremes' "I Hear A Symphony," a delicious last kick.